Galaxy Of The Lost 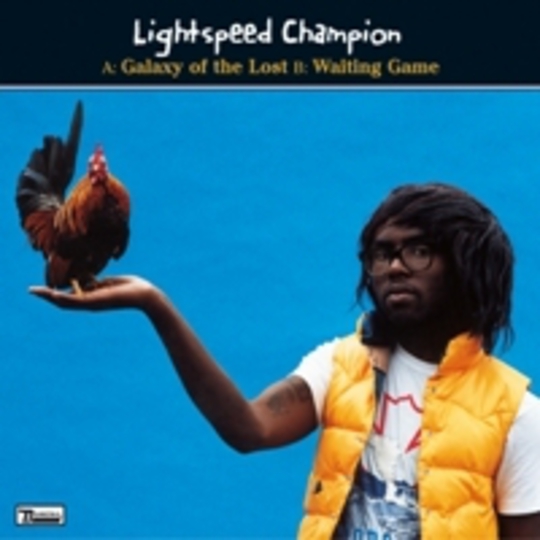 After the semi-successful, mercurial musical mash-up that was Test Icicles ground to a sudden halt last year, the curious eyes of the London indie mafia (and maybe even beyond - I've heard there actually _is_ a beyond out there...) were fixed beadily on the prospects of the three outgoing members. 'Most likely to' was, of course, Dev - the striking-looking star of the Test Icicles show, with his Hendrix referencing upside-down guitar, shock of matt-black Scissorhands hair, his MySpace ubiquity and his massive frame of über-cool underground and mass-cultural referencing, from comic strips to metal to kung-fu movies to country and hip-hop... it was always going to be interesting what came next. And after some promising early gigs in various incarnations, including an excellent showing at DiS's much-missed Camden Barfly night, he's pulled off a glittering return with this, his first single as Lightspeed Champion.

‘Galaxy Of The Lost’ kicks off with a pastoral strings arrangement and a vocal melody with a warm, classic kind of feel to it, as if these sounds and words are being inked onto crisp brown antique paper for posterity. Then, a deceptively ordinarily picked country guitar segues into a gentle, melancholic lament on the perils of drinking your way into oblivion. This is a song that sounds genuinely tired by late nights under the bright neon lights of London town. It's a lonely relationship confessional, sadly observing the fall of a heavy-drinking ex with a penchant for her daily fill of gin, and the deadening effect drinking has: "I feel better now I've seen you, but deep inside my bones feel like timber."

Lightspeed Champion has revealed a way with a tune and a lyrical sensitivity that Test Icicles’ cynics may not have expected, but to those who've had an eye on Dev for a while it come as no surprise. He reputedly writes two songs a day, and if even the odd one is as lovely as this, we've got an exciting album of gentle, melodic songwriting to look forward to soon.

Video!
Log-in to rate this record out of 10
Share on
Love DiS? Become a Patron of the site here »

Your English Is Good