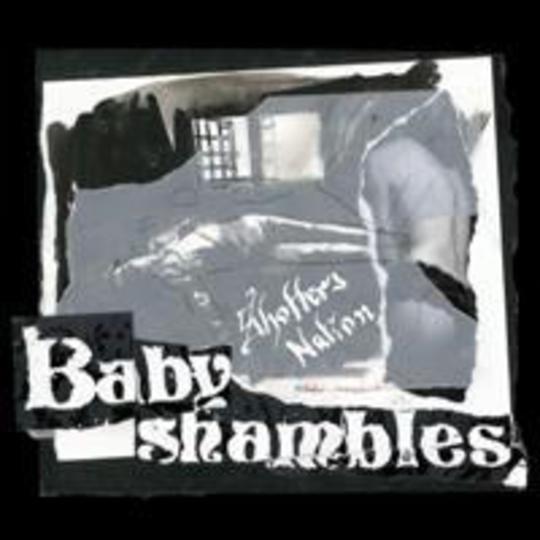 As of lunchtime Monday, anyway. Fresh-faced Peter long begat ubiquitous junky Pete, ever the evening standard, the flog-eyed bogeyman in London's free dailies. Since ever, it’s been hard to write up a Babyshambles** record without the words reading back like an attempt at long-range character assessment. Monitor the Doherty newswire, updated half a dozen times daily; assassinate/redeem as appropriate. As ever, Shotter’s Nation – like its dad – is a tricky bastard, riddled with self-reference and wet for the gossip-column where it can swell with rumour in the oily puddles of its own myth. Notoriety shows itself as Doherty’s real aim, self-promotion his real talent. Recently the music has just clung, really, to the rusted hull of the thing like a limpet.

Still, I'm brought back here by the ad hominem descriptions painting this record as some kind of return to form. Na. Even if ‘Delivery’ has been the best thing played before dark on Xfm all year and Stephen Street has done a musical ‘photoshop’ on the wayward punches the band throw as standard, pry the man from the music and the music doesn't have mussel. Half-excited from early reports, on the listen the good reviews given to Shotter’s Nation seem now more blotted than written; ink leaking out between points B ("junky mess!") and C ("reforming genius!") to join the dots in the Doherty narrative.

Aside from ‘Delivery’, which I imagine you’ve heard already, _‘UnBiloTitled’, _‘French Dog Blues’, ‘There She Goes’ and _‘Baddie’s Boogie’ are the lowlights giving shape to this murky record; the former the best, wrapped in the blanket of a hazy Doherty vocal. The others only stand out just slightly from the increasingly hackneyed Libertines/Babyshambles formula – English and New Yorker rock history pick-pocketed for influence then mished and mashed into place by clumsy guitar fingers. 'Crumb Begging Baghead' rolls forward proud of ripping off The Farm's 'Stepping Stone'; 'Unstookie Titled' wakes up dangerously close to JJ72; and 'French Dog Blues' deserves some kind of accolade for managing to pilfer from Tom Petty, the Supremes and the Ronettes, YYY's 'Cheated Hearts' and about six other songs simultaneously. Impressive, polyrhythmic karaoke.

That mish-mash though: it can work, and did so brilliantly on Up The Bracket, and has again at times since. ‘Can’t Stand Me Now’, ‘The Man Who Would Be King’, ‘The Ha Ha Wall’; ‘Albion’; ‘For Lovers’; ‘Killamanjiro’; ‘Fuck Forever’, ‘8 Dead Boys’, ‘Back From The Dead’.

Read back like that, it's a list that makes you appreciate more what the trouble-addled can get you into. Given more time, more focus, more money, that tracklisting above condensed would've seen Doherty emerge from the Libertines with one of the albums of the year. Sadly, there’s little to add to that post-Bracket mixtape here; aside from the single and 'UnBiloTitled' - a track that first appeared on internet forums years ago. Sedated by Street's production, the band lose the wild, rubbish quality that Mick Jones' incompetence presented them with just as they're learning how to write focused songs. It'd be like _Romeo & Juliet _if it wasn't so unremarkable.