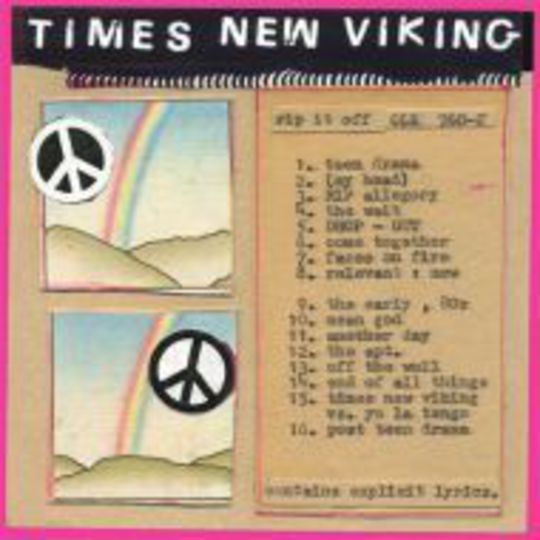 Alien Lanes was Guided By Voices’ debut for Matador, and, at its core, is at times a quite beautiful pop record. If you listen close enough beneath the layers of fuzz and glittering lo-fi crackle, you can hear precious little moments of melodic delight: the “yeah yeah’s” in ‘A Good Flying Bird’, or the loose simplicity of ‘As We Go Up, We Go Down’. Lo-fi for Guided By Voices was less an obtrusive means of separating themselves from their audience than almost a process of democratization – bringing pop down to our level, whatever that might mean. That is to say: don’t assume that treble, the snap, crackle and pop of low quality production, is there to drive you away. Of course noise can be a divisive, alienating shriek, but it can also be a call to arms, or at least to communication; punk and rock (and/or punk-rock) has always to some extent, at its roots, been about kids trying to get in touch with other kids.

Rip It Off is Times New Viking’s debut for Matador and, at its core, is, at times, a quite beautiful pop record. Whereas Alien Lanes dabbled in the surreal, a luminous 28-song patchwork stitched together in four-track frenzy, Rip It Off is more adolescent than alien. It begins with a track called ‘Teen Drama’ and ends with a track called ‘Post Teen Drama’. In between the Ohioan three-piece skip across the territory charted by their label-mates and predecessors: the glorious irreverence of Guided By Voices, Pavement’s shambolic self-consciousness, Yo La Tengo’s sonic excursions. Indeed, Yo La Tengo were masters of turning noise into something more than violent, a great blanket of fuzz that could became a tool in and of itself – something that Robert Pollard understood as well as anyone. Lo-fi in the right hands is more than an aesthetic (although it is certainly that), just as noise used well can become a barrage that unites band and listener in furious communion – a fact anyone who’s seen Lightning Bolt play can testify to.

So Times New Viking walk the line between pop and noise, indie-rock and punk-rock, effortlessly. ‘Drop Out’ swells with hopeful harmonies, like a more downbeat Matt and Kim, the track merging into ‘Come Together’, a huge wall of treblolic fanfare engulfing the song until all you can hear is a great surging tide of coagulate guitar. Then that becomes ‘Faces On Fire’, the best track on the album, and probably on any album this year, a bounding, joyous blend of surging, stained, messy riffs led by Beth Murphy’s vocal line, straining above the noise to yelp: “I can’t hear you!”. That’s what Rip It Off becomes at times: a challenge to us, a statement that pop doesn’t have to be steely sleek, that music is art and listening to indie-rock makes us art connoisseurs beyond gentrification because, hell, we go to rock shows where people play music to speak to us, made for and about us and, hell, that’s important.

And you’ve got to give the band credit, they know their history: why else would this record be called Rip It Off? So the penultimate track, the one that really sounds like Yo La Tengo, is called ‘Times New Viking vs Yo La Tengo’. Yet there’s something beautiful about listening to a group so aware of what they’re doing, of their place in the indie-rock pantheon, of what came before and what needs to come now. Because lo-fi is, above all, a testament to the moment, the hum and buzz of ‘the now’ etched onto the music as another dimension to ‘the message’. And what is the message? That music can bridge gaps. That noise can hug you. That it’s good to be young, and just as good to act it. That rock is an art-form that can overcome emotional detachment and disenchantment: on ‘The Wait’ we hear the band sing, “doesn’t it feel great to feel anything?”. And sure that sounds slightly pompous, but while we’re here, in the now, why not reach outwards as far as we can – to each other? When ‘Post Teen Drama’ brings Rip It Off to a soaring, tremulous finish maybe, just for a millisecond, you’ll be convinced that indie-rock can save lives.

Red Grapes In The City EP