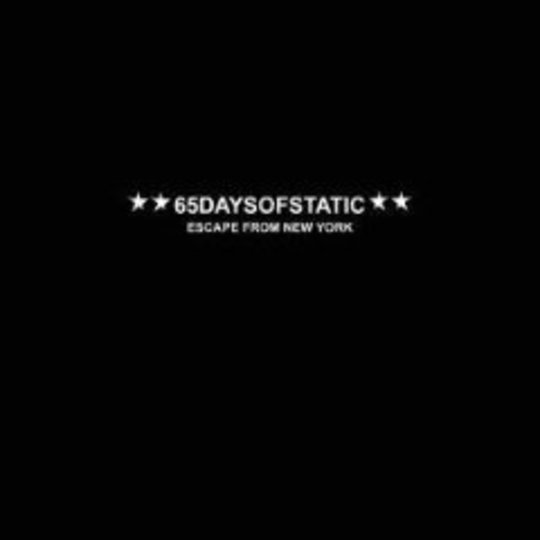 Whatever your opinions on 65daysofstatic, there’s surely something at least mildly smirk-worthy about their releasing an album recorded live at Madison Square Garden. Fair enough, Escape From New York IS an album recorded live at Madison Square Garden (at least partially), but that doesn’t really detract from the fact the world's most famous arena isn't exactly type of joint the Sheffielder post-math-bleep-whateverers play of a regular Friday, and they were in fact supporting The Cure. So on the face of it, choosing to release this live show on CD and DVD is an act of cheekiness approaching (well, distantly approaching) The Clash’s notoriously hubristic Live At Shea Stadium .

However, there is a point, that being that rather than some crappy amps in a bodily-fluid scented backroom, 65DOS here had access to a soundsystem packing considerably more sturm und drang to the pound. No doubt The Cure’s tech people have coke up and watch the Ring Cycle at least once annually just to make sure they and Robert Smith are on the same page when it comes to definitions of ‘epic’. They are, no doubt, sensational at making the likes of ‘Plainsong’ sound like the world is sighing its way to a mournful Götterdämmerung. Is this such a good thing for an often-quite-subtle-on-record support who appear to have dangerously hinted at stadium dance aspirations of late?

No sir. One Time For All Time’s ‘Drove Through Ghosts To Get Here’ kicks off proceedings and sound B-I-G from the start. Where on record it doesn’t climax ‘til very late in the day, the quiet build and air of nocturnal solitude is here more or less erased at birth by Meatloaf-volume piano, a mechanistic barrage of beats, and massive screeds of distortion that messily spatter the once hauntingly amorphous guitar line. Obviously it’s their song, and obviously it’s conceivable that an audience of Cure fans who don’t have the first idea as to who 65DOS are might respond better to the musical equivalent of the band standing on a street corner and screaming “LOOK AT ME! PLEASE!” than post-rockish subtlety. But these ten tracks get very wearying, very quickly. By the time the pace finally relents for a genuinely touching (if still slightly flabby) runthrough of the divine ‘Radio Protector’ it’s kind of hard to find the will left to be moved.

Not that they’ve ever attempted to be Sigur Rós in terms of glacial build, but it’s the sheer glossiness of the bombast that’s makes it so nerve jangling; in the past they always used to be such a visceral bunch of bastards, never afraid to be actively ugly when it came to it. Not so now. Matters are not helped by new songs ‘No Use Crying Over (Some Techno)’ and ‘Four Score (And Some Drum’N’Bass)’. They’re neither as amusing nor as totally cringeworthy as those titles might suggest, seeming rather to be a slightly cackhanded attempt to inject rave dynamics into the set – the former is just a grating two minute electronic blur, the latter some bleeps dipped in goth-friendly reverb that does admittedly pick up a solid enough degree of momentum somewhere deep in the last quarter. It's a lumbering step away from their more IDM-ish tendencies that’d maybe work if being performed someplace illegal in the Peak District, but, um, not to a crowd here to cry at a fat man for five hours.

Aaaaaaanyway, you can't say say a band has lost it just because of a live album, but it's perplexing what Escape From New York may actually mean. Is it something directly aimed at the Cure fans who saw them on this tour and might find One Time for All Time alarmingly subtle? A memento for themselves? Or a dark warning of things to come? Because if it’s not the latter then this record is the equivalent of a good friend confessing to be in the Sealed Knot and subjecting you to two hours of slides – fair enough they do this shit in their own time, but can they not involve us? And if it is the latter then, um... oh dear. At least the new album might have quite a funny name.