Music For The People 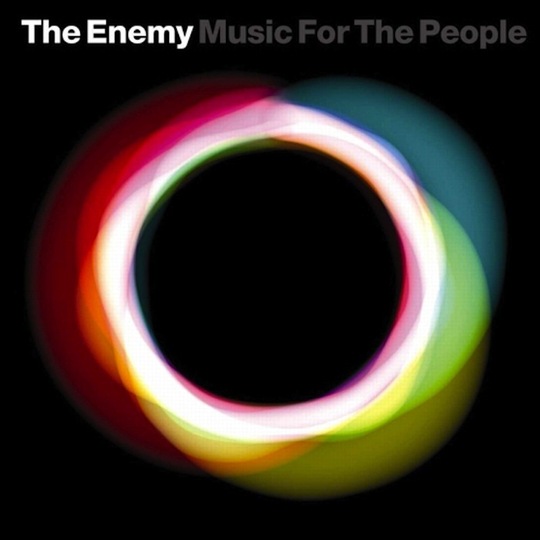 "Keep losing, keep boozing" interjects self-proclaimed 'voice of the people' Tom Clarke, nine-tenths of the way through The Enemy's difficult (on the ears) second album. Disturbingly, this is one of the better moments on Music For The People, an album that the band themselves insisted would make people look at them in a different light, highlight the band as supremely talented musicians and gifted songwriters, and ultimately strike a chord with the 'working classes' Clarke so patronisingly claims to represent whilst denouncing those "posh people who live in castles" he goes out of his way to lambast. Well Tom Clarke, I've got news for you; burying turgid, second-rate Britpop riffs in a halo of pointless strings does not create the second coming of Urban Hymns. And adding unnecessarily dubbed-over handclaps won't turn uninspiring pub rock dirges into stadium anthems either.

Which brings me onto a conversation I had with a fellow writer about this lot recently. Her argument defending Coventry's 'finest' (God help their worst) seemed to consist of little more than "they sell a lot of records so they must be good". That must be courtesy of good old Joe Public then. The same Joe Public who fall over themselves every Christmas to buy such fascinatingly original product as the latest music reality television show winner's single. The same Joe Public who buy into the ridiculous patronage of a racist bully. These are 'The People' Tom Clarke represents. The type who believe that owning a half-inched copy of Moseley Shoals coupled with a Toni & Guy coiffeured Beatles feather-cut gives them the right to purchase guitars, call themselves musicians and form bands. You know the ones I mean; those stuck in some hollow timewarp where Britpop is utopia, and anything else beyond that is the work of Satan. Every single town and city has their own version of The Enemy. The city where I live sadly has many. And yet it all started so brightly. Be honest folks, 2007's 'It's Not OK' and 'Away From Here' are fairly decent guitar-based pop songs. Nothing too ambitious in terms of wheel re-invention, but they did at least suggest maybe the band had some potential if nurtured and developed in the right way. What followed though was a cascade down the slippery slope at a rate of knots even the great Franz Klammer would have been proud of.

Because if To Live And Die In These Towns and its hollow sentiments were hard enough to take, 'Music For The People' doesn't merely scrape the bottom of the barrel, it actually embeds itself in the rim like some scratched carving that's infinitely more Kilroy than Banksy. To say it lacks invention, poise or any kind of definitive structure would be an understatement. To say The Enemy lack an original bone in their admittedly still only just post-pubescent bodies would be a more accurate lineage.

To cut to the chase, everyone has influences, looks to their heroes for inspiration, and there will always therefore be sources or points of reference as a result. What most artists - or at least so called credible ones - would never dream of doing is resorting to near plagiarism of the kind that would possibly see lesser minions (sorry Tom, I mean the 'working classes') end up in the High Court answering writs aplenty. You see, despite Clarke's protestations to the contrary that his band aren't "Britpop revivalists" or "in any way shape or form lad rock", Music For The People is a record so steeped in nostalgia that it should come stamped with the digits '1995' across its front sleeve, backed by a caustic union jack emblem.

The opening semi-instrumental 'Elephant Song' actually sets the record off to a reasonable start. The first two-and-a-half minutes burst into life amidst 'Kashmir'-style Led Zeppelin guitar riffs, only for Clarke to open his mouth during the song's last third and recreate Cast's 'Fine Time' instead. Cast I hear you cry? Yes Cast. And that's not the only time John Power's much-maligned combo get a rewrite here. 'Last Goodbye', a song that is allegedly about suicide, starts off almost identically to the aforementioned's 'Walk Away' before discovering strings and The Verve's 'Sonnet' halfway through. And there's more where they came from. 'Don't Break The Red Tape' apes The Clash and 'London Calling' in every way bar the lyrics - Joe Strummer is probably turning in his grave at the thought of inspiring such trite couplets as "There is no left/there is no right/New Labour is a joke/just another Thatcherite". But that really isn't the worst of it. Brace yourself folks, for 'Nation Of Checkout Girls' basically is Pulp's 'Common People'. No 'borrows from', or 'aspires to'; this is pure imitation of the worst kind, a virtual musical xerox whose only significant difference to Jarvis Cocker and co's masterpiece comes courtesy of such clumsy asides as "If you're lucky you can work the tills" - something Clarke may need to brush up on in the future.

I haven't even got onto the awful 'Sing When You're In Love', a distasteful wannabe stadium anthem about Clarke's favourite subject, "boozers", which covers itself in 'We Will Rock You' style voiceovers and handclaps that do nothing to disguise the fact it's one of the most hideous pieces of music ever committed to tape. Oh, and then there's the insidious ballad 'Be Somebody', where Clarke preaches "There's no such thing as a free meal/there's no future in British Steel/No one ever gives you anything for free/Unless you're sleeping with the BBC" like some poet laureate for people with learning difficulties. How such appallingly constructed lyrics got past the rehearsal room is a source of amazement in itself, let alone approved by the band's record company. The album finishes on 'Silver Spoon', where yes, you guessed it, Clarke makes the point that he's not "one of them posh kids". This then gives way to a piano-led hidden track entitled 'Goodnight Ladies And Gentlemen', which is fairly passable despite being more than a tad similar in structure to The Beatles' 'Let It Be'. Never has reaching the end of a record been met with such a massive sigh of relief.

In all honesty, Music For The People isn't as bad as many of The Enemy's critics had expected it to be, it's actually much, much worse. Despite the so-called grandiose statements of intent such as strings, pianos and soul-trained female backing vocalists, this is simply a case of mutton dressed as lamb and those lambs eventually being slaughtered. It really is difficult to find anything positive to say about it, except that, just maybe, Music For The People will signal the end of the music industry pumping money into third-rate acts stuck in a Britpop timewarp and ring out the final knell for the overdue demise of Ladrock.

Yonder Is The Clock

The Maccabees at The Royal, Derby, Wed 29 Apr