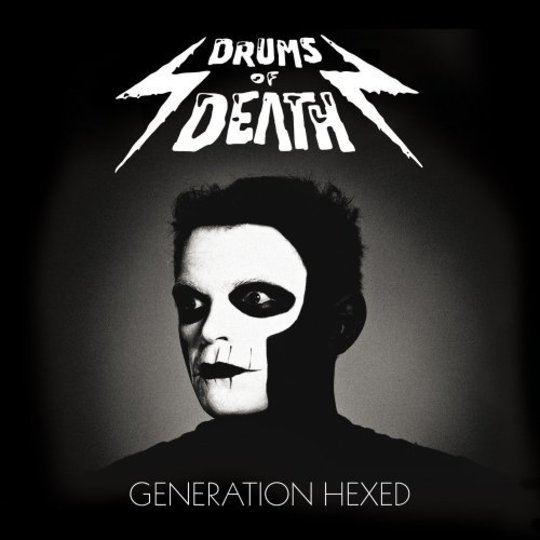 Gloom is nothing new to music right now. For most of the past decade, darkness and mope has been the purview of indie. We’re coming out of a deeply Joy Division influenced decade, where self-directed frustration and malaise was pretty much de rigueur. The British music industry, and likeminded counterparts in the US, continue to belch forth mopey bands at a steady rate. The quality of the music varies, but most of these bands manage to express a few negative emotions particularly well: disappointment, sadness, frustration; the stakes are low and the gloom is usually directed inward.

In a parallel gloom-related developments to the current mope-core renaissance; dance producers have been successfully playing around with some grim sounds in the last little while. Dubstep at its spookiest (Skull Disco, Burial) imparted a vivid sense of foreboding, impersonal urban dread, and/or unchecked masculine agression, depending on the producer. Just as mopey rock will always find its audience of mopey people, there’s always going to be a market for some kind of dark dance music to soothe male aggression, fuelling largely girl-absent dance floors and keeping spotty guys in hoodies tapping their feet percussively on the tube.

So, darkness in music has been particularly well represented. However, there’s one particular aspect of gloom which has been absent for a while, an aspect which I’ve missed. The sinister, theatrical, exhilarating fun which one can have with negativity, when outwardly directed and applied in an appropriate fashion. Think of the Misfits, the Cramps, the Birthday Party, Shellac, Fucked Up; etc. Gloomy, undoubtedly, but gloomy in such an enjoyable way. For literary purposes I’ll call this quality creepiness, but this word is a rough approximation at best. The music of Drums of Death is rife with it.

Drums of Death (London-based Scottish producer Colin Bailey, replete with an occult backstory and his face decked out in Baron Samedi voodoo greasepaint) has been playing around London for about 18 months and I've been there for a large part of his development. Bailey's live show has evolved from a one-man primarily dance-based affair of hepped-up DJing, a disparate yet seamless mixture of bass-driven sounds with Bailey shouting over the top like a ghoulish, black clad ringleader. In these earlier live shows, and in many of the internet mixes he's recorded (I’ve racked up a substantial number of plays on his Resident Advisor mix) one noted elements of dubstep, rave, classic jungle, early house, and aggressive techno, an eclecticism one would expect from Bailey’s home on the Greco Roman label, best known for its association with Hot Chip's Joe Goddard. That was then; for the last year or so Bailey’s been moving away from his focus on pure dance towards a more rock-influenced template with a live band and an increasing emphasis on songs. It’s no longer appropriate to think of this as dark dance music only; we’re dealing with a new sort of dance-pop here, one which eschews the mope favored by its contemporaries and instead plays up the creep like nothing in recent memory.

Listening to Generation Hexed Bailey’s debut, one gets the sense of 30 or so years of dance music history exhumed and recombined through a creaking, decayed filter. One notices in the music influences of disco, rave, early house; nothing here sounds particularly modern; it’s the way the elements are deployed that shocks and unsettles. Vocals are delivered in Bailey’s Scottish-accented bark, occasionally augmented with falsetto, sometimes processed, sometimes not, but always with a detached, eerie, commanding quality. It’s the sense, in these tracks, of the darkness and decay behind dance’s bubbly façade which turns my mind towards a few of the genre's more tragic figures: Arthur Russell, Ron Hardy, Larry Levan; their inexorable degeneration, and the inevitable grim comedown of those who enjoyed the music they made, had too much fun, and paid the price for it afterwards. Underpin this with a sense of the occult and mystical aspects inherent in the primordial roots of percussive music, and you have a truly atmospheric blend.

Despite Bailey’s early emphasis on dance, the song structures here are expertly crafted and demonstrate an individual who’s not content just to make tracks. And this discontentedness has resulted in some serious bangers. ‘Won’t Be Long’ is early Nineties zombie-house—piano stabs, shouts of “I’ll be there when you need me”—resurrected through circumspect, unholy means. ‘Lonely Days’ is gothic piano stabs and inappropriate, borderline-obsessed Poe-infused yearning. ‘Science and Reason’; bizarre, pseudoscientific Victorian occultist-dancehall, 'Modern Age' is arguably the most fully realised pop number here; but from a sheer musical standpoint, 'Voodoo Lovers' is the culmination; Gozales’s wistful piano stabs combining with Bailey’s thickly-rendered, wistful chant and invoking a sense of gothic dread alongside true emotion. The songs here are far better than they needed to be to get music this original noticed; the fact that they’re so expertly done is what makes this record excellent.

There’s still some room for growth here. While frequently captivating, Bailey’s vocals are raw, and on the less processed tracks, occasionally come across as somewhat flat. And there’s still a sense that the album lacks some of the power and energy of Bailey’s solo shows. Managing to capture this while still keeping the emotional nuance could be Baiely’s next big step. The scrappiness of some of the tracks may be deliberate; Bailey has a background in hardcore, after all; however I can’t help but feel a larger sound may be the appropriate companion for the subject matter here. The accompanying Dubs of Death remix versions of these tracks may have already tackled this concern, and I look forward to hearing them. But any criticism aside, this is a remarkable debut. Mope is dead, all hail the rebirth of creep. If you need me I’ll be painting my face like a zombie.

Postcards from a Young Man