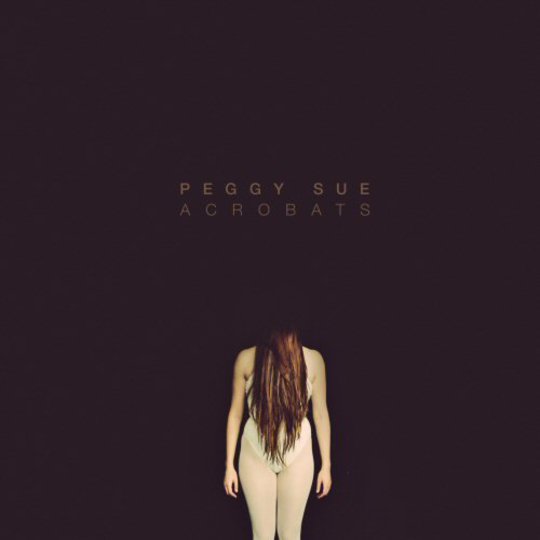 It’s a bit silly in this day and age to be describing female singer songwriters as witches or sirens or any other form of mythological figures for that matter. That is especially true of Peggy Sue’s Rosa Slade and Katy Beth Young who on their previous album Fossils and Other Phantoms scarcely came across as marine temptresses or possessing any occult clairvoyance from relationship disasters. Rather it was an album that catalogued a history of misfortunes and misgivings.

Circumstances might have marginally improved on their follow up Acrobats. This is an album that begins with which such lines as “I cut my teeth across his flesh/ watched him weeping as I left”. Women wronged finally have an opportunity to exact some cannibalistic wronging of their own. This welcome change is accompanied by Peggy Sue trading in banjos, ukes and acoustic guitar for rumbling, growling electric riffs reminiscent of Rid of Me-era PJ Harvey. ‘There Always Was’ is pure malevolence with the ominous intent of its guitar strumming, ritualistic drums beats and (metaphorical) talk of mutilation (“She said I’m just a served head, no whole to hold”). On a less sinister note, body parts seem to be a particular fixation throughout, with the gothic folk of ‘Funeral Beat’ culminating with chants of “flesh to flesh” and “lipstick left where lips have been” and ‘Changed and Waiting’ imploring to “take the lines out of your mouth”; all part of the intricate wordplay that has always been the charm of this band.

But if there is an over arching theme to divine, not to simplify or limit the record, it’s one of movements, proximities and space. Often it’s the need to allow for personal space for the sake of artistic and emotional relief as on ‘Song & Dance’, or the admission that distance can, far from bringing fondness, provoke realisation of shortcomings as on ‘Changed & Waiting’. It doesn’t always work though, as with the admittedly imaginative, tongue-in-cheek, post break-up conceit of ‘Parking Meter Blues’. The existential crisis and OCD behaviour described in clock-checking and distancing oneself by circling calendar days are entirely believable acts, affirming that life does indeed go on. Filling park meters as an excuse to leave the house is, however, an unconvincingly generous post break-up act given the self-pitying, basic outdoor trips limited to confectionary and alcohol, nature of that period. ‘Boxes’ also comes off as slightly contrived, lacking the lyrical adeptness of the rest of the album, bogged down in part by plodding muddied guitars and oft-used idea.

Even with these small blips, Peggy Sue have made the transition to a darker and bolder sound with ease. Rosa and Katy are well-mastered in accompanying one and another: taking turns to be in foreground as occasion suits best, drifting in and out of the background and unleashing a powerful force in chorus. They are aided in no small part by drummer Olly Joyce who seems to have been granted autonomy to meddle around with percussion providing a rich, yet unobtrusive, backing. Above all, Acrobats offers glimpses of a darker side of Peggy Sue; hopefully it's an omen of more to come.

Hollywood Under the Knife