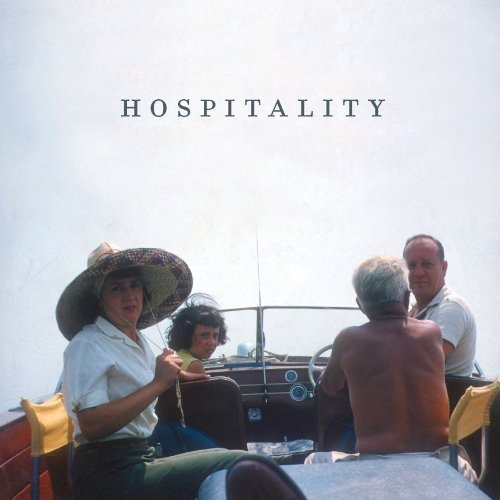 Every song on Hospitality hints at the pressures and dissatisfactions of post-education system existence as well as the joys and excitements but always with a cool sheen of cynicism and irony cleverly blurring the lines between the two tones. »

the angular, intricate, and intelligent compositions of hospitality signal a sophisticated new pop voice. singer amber papini's idiosyncratic songwriting and incisive lyrics coupled with the band's rich arrangements on their self-titled debut explore youth, new york, and the bittersweet commingling of past and present in a way that feels just right, right now. from the opening phrase of "eighth avenue," guitar hooks are balanced with a cultivated melody. papini's singing has a wisp of an english accent via kansas city (she learned to sing by imitating richard butler on the psychedelic furs' talk talk talk) and her lyrics create a moonstruck, even cinematic vision of new york city, where the band formed in 2007. 'hospitality,' while hearkening back to '70s/'80s pop-both elvis costello and kate bush are influences-has an ambitious vision: its big promise is nowhere more evident than on the gorgeous anthem "julie," the album's centerpiece which already sounds like a classic. the song's lush, glorious build is coupled with lyrics inspired by papini's great-grandfather, a pennsylvania coalminer. reprising some songs from a self-released 2008 ep recorded by karl blau (k records) allows hospitality to nod to its beginnings as a more lo-fi outfit; that early intimacy can be found in the arrangement of the cheeky and distinctly nc-17 "liberal arts." after patiently honing their craft, playing concerts (and gaining converts), hospitality have reached what will be its first apex with many more heights to come.
description from www.roughtrade.com