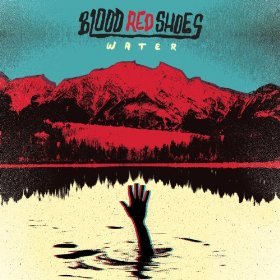 Water is both Blood Red Shoes getting back to the core elements of what makes them a band and at the same time making an exciting leap forward. »

having just completed a lengthy uk tour with new jersey rockers the gaslight anthem following the release of their critically acclaimed album 'in time to voices', brighton rock 'n' roll duo blood red shoes return in 2013 with a brand new three-track ep. the three new tracks were recorded in dallas tx this october by john congleton (the roots / the walkmen / explosions in the sky). the songs are some of the most out-and-out rock riffs they've ever written, inspired a lot by driving around the usa and pure bad ass rock n roll immediacy - they're much looser, faster, and less considered than 'in time to voices' and capture that feeling.
description from www.roughtrade.com