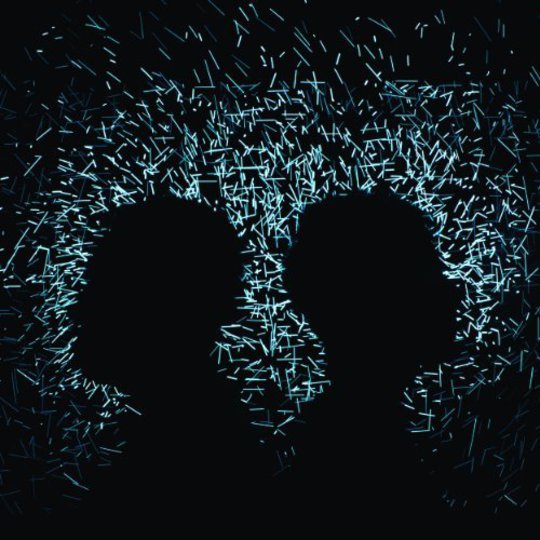 With chopped falsetto vocals, filthy funk bass, and many a formaggio guitar solo lurking, it's not hard to see that young pretenders Letherette have been influenced by Daft Punk - there’s even a photo online of the Wolverhampton duo imitating their Parisian muses, DJing behind D.I.Y. masks. So, for those of you who’ve been waiting since 2005, Andy Harber and Richard Roberts’ debut release will certainly tide you over until the end of May.

Admittedly, the start of Letherette is dominated by just the sort of careening synth scales that so defined Discovery,with lead single ‘D&T’ a perfectly plausible Daft Punk album track, all housefunk and squealing falsetto samples. ‘Warstones’ - an instant, exuberant highlight – has been resurrected from an earlier EP and is still clearly channelling the robot masked ones. But, it’s so good that if you put it up online as a Random Access Memories leak, much of the internet would be lost in exaltation. While the inspiration is clear, Letherette add trickling, shimmering synths never yet heard on a DP release, as well as a pounding house beat that’s more reminiscent of His Majesty Andre than the discofunk of Bangalter and Homem-Christo, stamping their own mark on the sound.

Though the boys have evidently done their homework and made a few important discoveries regarding French electro, there’s more to them than mere copycat soundalikes. Another sky-rocketing success is the effect-laden, sub-aquatic bass of ‘The One’, which features borderline Timbaland ‘boom-click-boom’ percussion and warm, washing synths before diving into throbbing bass and driving, dubby house more akin to Justice’s ‘D.A.N.C.E.’ than anything Daft Punkian. Elsewhere opener ‘After Dawn’’s warm space synths and liquid, rumbling bass call to mind MGMT’s Oracular Spectacular.

Along with the aforementioned disco -house, prog is certainly a core influence on Letherette. The album’s very structure – slow, soaring intro, pulsing energy, ambient intermission, more disco exuberance, and a dreamy closing comedown – lends it an immersive, spacious mood. Mid-album interlude ‘Gas Stations and Restaurants’ drips echoing ambience and psychedelic vocals, building into the slow grooving ‘Cold Clam’, where a niggling loop and shimmering synths creating a more downbeat Massive Attack-styled sound – again, indicative of Letherette’s sonic breadth of vision. Final word ‘Say The Sun’ is an exercise in restrained euphoria, with calm synth loops laid over a proggy beat – an electronic equivalent of ‘Wish You Were Here’, wafting you back to reality.

Despite something of a slow start, Letherette builds into an expansive, absorbing album, spanning a huge variety of influences and threading them together impressively within a coherent framework. Like Messieurs Bangalter et Homem-Christo, it’s dance music that effortlessly transcends day and night, and is fluid enough to please aficionados of many genres. Though the Parisian goliaths return this summer, it seems unlikely that this Wolverhampton duo will be lost in their shadows.