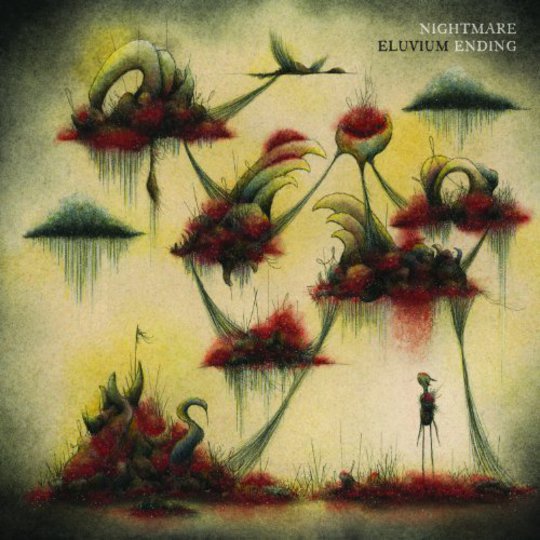 Readers of a certain age may remember the furore created by the news: Dylan has gone electric! Bob Dylan’s (in)famous transition to playing guitars you have to plug in during his 1965 tour might not seem that seismic after all these years, but at the time, amidst cries of ‘Judas!’ and ‘traitor!’ from the bearded faithful, the effect was... electric.

It was the same way in 2010 when Matthew Cooper - he who essentially is Eluvium - released Similes: the outrage and indignation were palpable. Disgruntled ambient fans chanted abuse, threw stones and burnt Cooper in effigy. Similes, in a complete break with Eluvium tradition, had vocals. Cooper sang. And there was percussion too. Of sorts. The overall effect was pretty much as you might expect: it sounded like a heavily sedated singer-songwriter whispering melodies from a flotation tank.

Curiosity from the ambient community about Similes’ follow up has been intense. How much farther will Cooper expand his sound? Will the next Eluvium record contain a jazz horn section or mathcore breakdowns? The answer to all the above is a resounding ‘no’. Nightmare Ending is, for better or worse, the sound of an artist returning to exactly what he’s good at and (over the course of two CDs and 80 plus minutes) giving the listener a very good reminder of exactly the ambient sound that made Eluvium popular in the first place.

The tone is set perfectly on the first two tracks, ‘Don’t Get Any Closer’ and ‘Warm’, where softly rolling and swelling ambient music evokes Tim Hecker and the more restrained works of Aidan Baker. The effect is familiar and, well, warm. There’s nothing here that would sound out of place on ‘traditional’ Eluvium records such as Talk Amongst the Trees. There is a hint of a more sinister and slightly darker palette though as the album develops. The ‘nightmare’ of the title and vaguely threatening artwork are echoed in the distorted heartbeat of ‘By the Rails’ and the glitch martial stalk of ‘Envenom Mettle’. In fact there’s an ambiguity to the sound of Nightmare Ending that is reflected in the title. An optimist might read the title as a celebration of the end of a nightmare; a glass-half-empty type would read it as ‘an ending that is nightmarish’. Both positive and negative moods are played with over the sprawling run time of the double album.

The double album factor is both a blessing and a curse. There are wide range of different types of Eluvium sounds showcased here: the minor key solo piano tracks, the gently distorted organ tracks and even one track with vocals where Yo La Tengo’s Ira Kaplan appears on the very last track to mutter sleepily over the comforting swells of ‘Happiness’. You get a lot of Eluvium for your money. However the album does feel somewhat sprawling and disjointed as a result. There are a lot of great tracks on Nightmare Ending but it is hard not to feel that it is slightly less than the sum of its parts.

Nightmare Ending was apparently begun before Cooper released Similies’ ambient-pop excursion but then abandoned before being returned to this year. Cooper has stated that in creating this record he is exploring the distinctions between 'flawless and flawed'. Listening to Nightmare Ending the ‘flawless’ is much more apparent than the ‘flawed’: with the exception of occasional disquieting sounds on tracks such as ‘Envenom Mettle’, everything here sounds very tightly controlled and perfectly in place. Perhaps Nightmare Ending would have been a more interesting record if Cooper had let himself off the leash rather more and explored ‘flawed’ ideas and sounds more purposefully. An Eluvium record that pushed the listener outside of the comfortable little bubble that Cooper usually creates would be far more daring that the inclusion of vocals on Similies and probably more rewarding too.