You Can Do Better 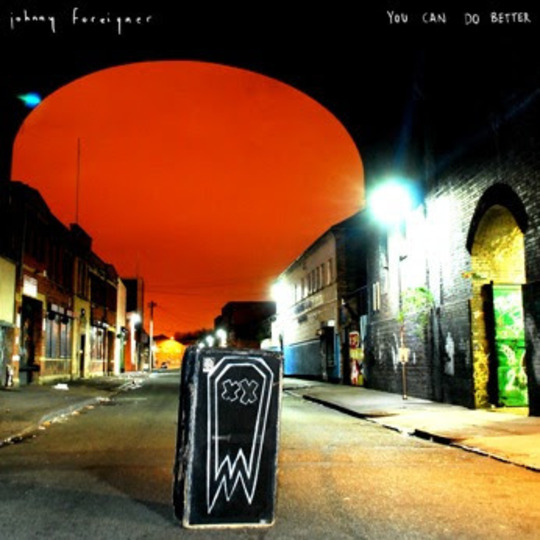 Johnny Foreigner’s fourth album? Boy, how time flies! Seems like only yesterday we was there innocently sipping pints in the pub, someone mentioned the inaugural effort by a band from Birmingham, of all places, another asked if they bore any relation to an improbable-sounding thing he called tweecore, the existence of which I very much doubted and even more so now, then the whole fucking global economy collapsed right there and then in Shoreditch. That was 2008. It was late and I had to walk home thinking there was no way I would get a job now.

I listened to JoFo’s debut, Waited Up Til It Was Light, many a time after that, and often we saw the dawn together, which I guess is what the rascals were after going by the title. Hard times, they were, but simpler somehow, you know? (I mean, I don’t know much about much, but there was no such thing as coalitions then and David Cameron had yet to be spawned by the Anunnaki so it was more or less western civilisation’s Golden Age, as far as I can tell). Gosh, ‘The End and Everything After’ was a smash hit in my little world – what a rollicking unstoppable monster of a tune! And ‘Sometimes in the Bullring’ – blimey! They don’t make super-catchy yelping choruses like that anymore “I’ll wait for your outside car packs! Outside busy shopping centres!” Yessir!

But that was a long time ago. I have a beard now (kind of). Things have changed. What have I missed? Well, with little notion of what I was doing the last five years, I presently see that there were two more albums, both of which I more or less missed, and checking now, they both sound quite nice. I mean, Johnny Foreigner are fucking consistent, you know; there’s all that early-Weezer-esque melodrama, and also the frenzy, the shouting, the emotion. The last one, Johnny Foreigner Vs Everything, it might not be life-changing, but it’s pretty infectious, lots of memorable moments, Good Honest Fun, in short. Moreover, they were already getting somewhat bitter and twisted then, and I can get behind that.

Since then (2011, apparently), I’m not sure what they’ve been doing – they needn’t explain, I mean what the fuck have I been doing, you might well ask (and I might well answer, NOT A LOT) – but now they’re back. And so have they progressed? Have they turned stale? Are they musical zombies operating purely by motor function? Well, I’m pleased to say it’s indisputably the former. Everything’s tighter, more confident, even a wee bit slick, aye. There were about a million songs on JF Vs Everything and often it doesn’t sound terribly focussed. This one is as tight as a…well, I shan't go there, no.

It all kicks off with ‘Shipping’, racing out of the tracks with a fire up its arse. The band’s problems may be more adult now – "I’ll start shipping you, if you start shipping me" - serious stuff – but the best way to deal with them is at top speed. Standout track ‘Le Sigh’ is just as frantic, and from what I can make out of the lyrics it’s laced with regret; and there’s nothing like regret at a million miles per hour.

The reckless pace doesn’t let up until fourth track, ‘Riff Glitchard’, a peculiar number with a dirty uncooperative bassline, world-weary lyrics, Nineties drums… it’s a sign that despite the honing of a noiser, more aggressive sound, JoFo still possess a willingness to experiment. At least on this one oddity of a track.

Then it’s more or less a terrifying unrelenting joy-ride to the finish, with towering guitar waves, lovably adolescent bedroom-riffs, sometimes making me think of …Trail Of Dead, other times Yo La Tengo, probably neither really (Take away the rum, sir, I need a fucking coffee). Because JoFo really have their own sound, you know – those whiny, cheeky-sounding guitars, boy-girl part-wimp-part-don’t-fuck-with-us vocals, the stop-starting, the occasional twinkly-eyed moments (see ‘WiFi Beach’) – I can’t think who else is doing this kind of thing now. The latecoming highlight is ‘To The Death’. “No more songs about suicide” indeed – this is a glorious last-ditch anthem for the doomed. Although, hang on, penultimate track ‘Le Schwing’ is certainly as good, yelling about not looking back while trembling with regret…

All the innocence of 2008 (for me at least) is gone, maybe because now I can’t blame everything on the economic crash, only Michael Gove, but still Putin and definitely Netanyahu. But this is easily as good JoFo’s debut, and once upon a forgotten time I was addicted to that record. How they top this is beyond me. But I won’t miss the next two or however many albums. Promise.