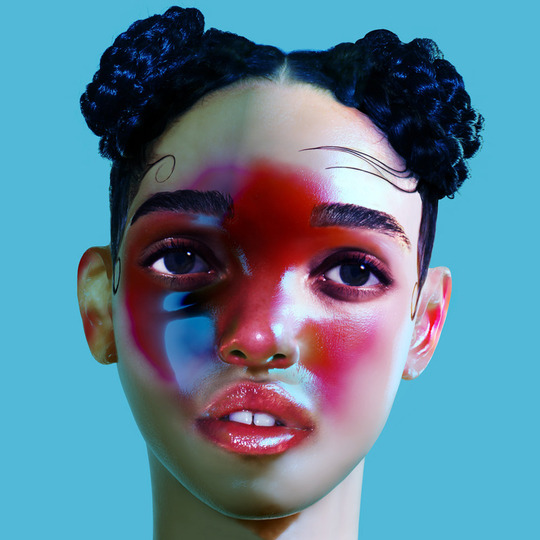 Ahead of this year's Mercury prize, DiS in partnership with Naim Audio's new wireless music system, mu-so, will help you GoDeeper into 2014's nominated albums. Today, we would like to turn your attention to the fantastic debut album by dancer turned alien-pop phenomenon fka Twigs. This review originally appeared back in August ahead of the album's release.

Visit our Mercury mini-site for two thoughtful think pieces about fka Twigs, and more coverage of all of this year's nominees.

Pummelled continuously round the head by 24-hour news. Obliged to watch an entire DVD boxset per night so as not to get left behind as a cultural dinosaur. Plans for a costly high-speed rail network just to make the journey from one bustling metropolis to a similarly overcrowded conurbation thirty minutes quicker. Software update notifications every time you plug in your damned toaster. A Facebook feed bombarded by the constantly ageing faces of your friends’ infants. The We Buy Any Car jingle playing on an involuntary four-hour loop inside your crackling brain. Ray Winstone’s disembodied noggin interrupting all sports coverage every thirteen seconds to bellow the words, “Come on geezer, put a fackin’ monkey on the ‘orses, you soft bleedin’ muppet!” Contracting the inability to concentrate on any arts criticism that dares to be longer than 140 characters. Too busy working, networking, scrolling, sharing and clicking to have the time or energy to even skim through a fluffy airport novel, let alone make it past footnote no. 24 of Infinite Jest.

Let’s slow the f=== down everybody. And listen to FKA Twigs.

Traditionally, the sound of youthful dissent has often been tied to pedal-to-the-metal acceleration, be it punk rock, thrash metal, grindcore, drum and bass, happy hardcore, or The Cuban Boys’ yodelling hamster song. Well that stuff’s old hat now and with the world rattling forwards at twice the pace of Technohead’s ‘I Wanna Be A Hippy’, the only real way to rebel in 2014 is to slow down, man, s-l-ow d-ow-n.

As Sean “Mr DiS” Adams tweeted to his bazillion followers after seeing her live for the first time, Tahliah Barnett aka FKA Twigs is a “drone‘n’b, Aaliyah in a slo-mo daydream”. The comparisons to the blue-mood soul sound of Aaliyah are apt. Barnett’s extraordinary voice also evokes the melancholic queens of trip-hop Martina Topley-Bird and Beth Gibbons, and Massive Attack collaborators such as Sinead O’Connor and Elizabeth Fraser (not to mention various others from the 4AD roster).

Anyone who’s already heard the single ‘Two Weeks’ will testify to the truly astounding nature of Barnett’s vocals. The track is an astonishing display of power and restraint. If those desperate X-Factor wannabes are kids running amok in an unguarded fireworks warehouse, letting off bangers left, right and centre and accidentally burning their faces off with their own unfixed Catherine wheel lungs ‘cos they think that’s what Mariah Carey does, Barnett is an expert pyrotechnic with a remarkable control over her rockets, knowing exactly when to explode and how long to hold back for pace and suspense with little more than a sparkling whisper. With extra swearing. And slower.

Kylie Minogue’s instructions to “slow down and dance with me, yeah, slow” come to mind, yet despite rocking mounds of rich, deep, funky, booming grooves, LP1’s music is too slow to dance to really. Try slo-mo boogying to this and you’ll risk looking like an aqua aerobics class that lost its swimming pool. Its disorientating, unsettling and claustrophobic ambience would be better suited to soundtracking a Netflix reboot of Nineties yuppie drama This Life. But don’t let that put you off. It may be slow but Twigs’ music is constantly swerving, shifting and splicing. While its glitchy beats, swathes of bass and woozy synths may soothe, they never bore. Its production is slick, professional and precise, but fortunately LP1 remains too out-there to put on at a dreaded dinner party (unless, perhaps, it’s one of those mythically kinky dinner parties where you all put your car keys in a bowl and then make ((excruciatingly slow)) love to someone else’s hubby). “Slow love / So much better when we take it easy / Slow love / So much better when we take our time,” as Prince once sang.

Pleasingly, FKA Twigs makes sex sound as awkward and nerve-racking as it’s always been here in post-Victorian England where we might get Prince but we never really get Prince. Twigs’ music is undeniably sexy, but in a somewhat distracted, apprehensive and paranoid way that flirts with being more frightening/frightened than sensual. It’s like trying to calmly enjoy a snog on the steady ascent of a rollercoaster, or being seduced by someone who you slightly suspect may in fact be a phantom. Perhaps Barnett is a phantom. Or an alien, like Prince. Or an imaginary mutant r‘n’b superstar who’s escaped from the radiator inside one of David Lynch’s transcendental nightmares.

When Twigs sings about touching herself on ‘Kicks’, she doesn’t sound cringingly exhibitionist like Lady Gaga or Madonna before her, she sounds wounded and alone (“I love my touch, know just what to do, so I tell myself it’s cool to get my kicks like you”), yet still strong and defiant (“I just touch myself and say, I’ll make my own damn way”). Like other aching tracks such as ‘Numbers’ (“Was I just a number to you?”), ‘Kicks’ could be a retort sung by one the many girls who’ve been dicked over by the sexual shenanigans of The Weeknd.

In actual fact, some of FKA Twigs’ ostensibly sexy-time lyrics are deeper than they initially appear. Barnett has explained that ‘Lights On’ (“When I trust you we can do it with the lights on”) is more concerned with personality than physical matters; it’s about being comfortable enough with somebody to reveal who you really are. And it turns out that ‘Video Girl’, which on first listen might come across as some seedy virtual sex narrative, actually documents the far grubbier experience of Twigs’ former employment as a backing dancer in the video for Jessie J’s ‘Price Tag’ (the horror! the horror!).

Confidently frail and hesitant, LP1 is a refreshing reaction to, and a calm assault upon, the unfathomably fast-paced total noise of the current age. It projects modern anxieties, vents them, and forms a big warm blanket to protect and medicate you from them too. So maybe you should surrender to Ray Winstone’s bloating, floating, gambling-promoting mug after all and have a flutter on LP1 winning the Mercury. Don’t let that put you off either. This is no Well-Done Our Kid by Guy Garvey and The Elbows or James Blake’s Overblown. This one deserves it.