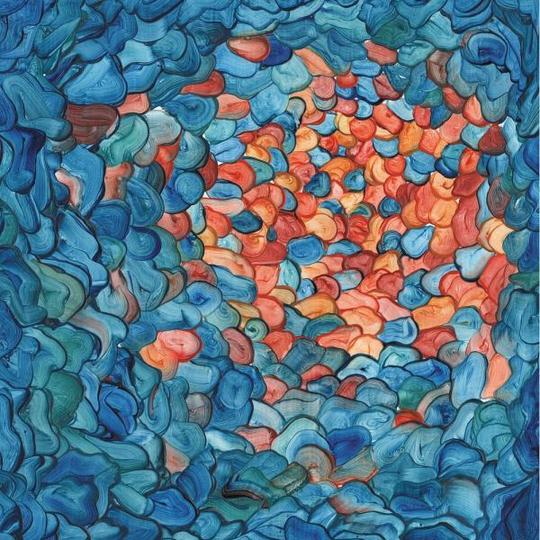 Sharing stages with UK-indie royalty like Alt-J and The Maccabees certainly helps, but Gengahr’s rapid emergence as one of the country’s favourite up-and-comers came mostly by their own design. Ever since the timid, groove-laden debut single ‘Fill My Gums with Blood’ set everything into motion, the London four-piece have created a unique space for themselves in people’s estimations – a string of sugar-coated singles followed, containing about as many solid hooks as possible in under four minutes, and before too long (seriously, just over a year) the inevitable debut-album-hype was rearing its pressurising head.

Across their concise, colourful first record, Gengahr prove well equipped at dealing with that pressure. On A Dream Outside, frontman Felix Bushe’s shrill, quivering falsetto and John Victor’s warped guitar noodling make a beguiling pair, the band straying as far from an identity crisis as you’d think possible. The rhythm section stays locked firmly in step, twitching nervously like a bodily impulse, all whilst Bushe toys with subliminally eerie lyrical sentiments. The pervading mood is one of quiet unease, particularly on the glorious ‘Where I Lie’ where Bushe goes full-Frankenstein (“the monster I see / grew deep inside of me”) and the pick of the singles ‘She’s A Witch’, where he woos: “I’m not gonna miss you / but I’ll always want to kiss your mouth”. Even when Gengahr mould something a little more sincere, a ghostly charm hangs under the veil like layers of creepy old wallpaper: the most soaring chorus on the record appears on ‘Bathed in Light’, but Victor’s off-kilter guitar jolts throw any sense of grandeur thrillingly off course, whilst the closing track ‘Trampoline’ even borders on ballad territory, managing to retain a hint of the perverse via a gloriously unkempt guitar solo at the albums final swansong.

Despite its consistency, though, there's a slight worry that fans will feel shortchanged by this record. I don’t mean to get technical, and perhaps I should suck it up and accept that albums are getting shorter, but at a scant 36 minutes, A Dream Outside is about as lean as they come. Its stunted length leaves a nagging sense that Gengahr have more to offer - their eccentricities (the pitch-shifted guitar tones, Bushe’s wraithlike personality, the robotic precision of the drums and bass) are hardly given the time to establish themselves before the record ends, sitting all too coyly beneath the surface as though waiting to be excavated. On the one hand, Gengahr have acres of space to move into, but on the other, it leaves A Dream Outside feeling a little too thin.

In truth though I’m willing to let Gengahr off the hook – despite not playing all of their cards en-debut, what they do offer is mightily encouraging, their peculiar quirks a welcome relief from the hoards leather-jacketed ego-rockers that seem to be emerging from every crevice of late. One can almost imagine Catfish and The Bottlemen picking on them at school for being 'weirdos', but it’s Gengahr's commitment to weirdness on A Dream Outside that puts them many streets ahead.

You're Going to Make It