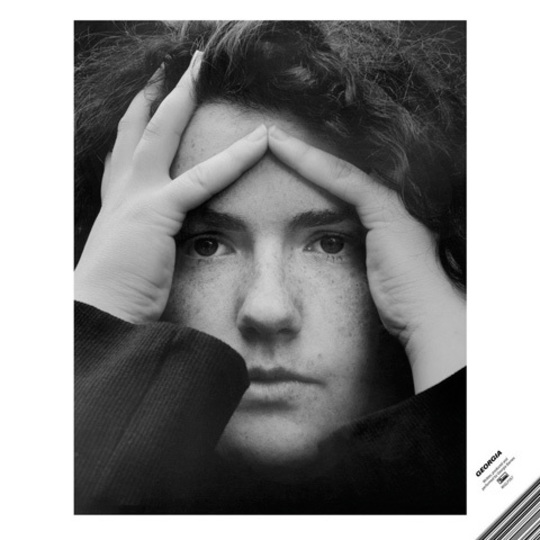 I’m seeing a trend emerge here. I’m about to tell you 'bout another singer/songwriter, again who’s written and produced her own work, again on a major label. Hmm.

However, while Emilie Nicolas dabbled mostly in dainty shades of ivory, London-based artist Georgia slashes in broad strokes of maroon. In this debut, she emerges fully-formed yet ethereal, a spirit slipping between silky and sassy, between clattering beats and electro grinds. Perhaps you’d call it pop, but it’s not the cluttered gilded stage that most stars get squashed in. It’s a black light basement, a circle of devotees engaged in solemn ritual, screaming and whispering and clapping each other on.

Give it a minute. You have to float up from the album’s intro, a little sundry flourish (albeit with some misplaced cries of 'Georgia!' from a buncha kids) that slips you like a buttered chute into the buzzing, booming den of 'Kombine'. At once you’re assaulted at all fronts – ”I’m gonna get the wrong boy, but I’m a get you back,” Georgia cries with impish glee, amid strange Middle Eastern winds and a shufflin’, kinda Rihanna-ish stomp. That doesn’t sound like it should work, but in this electric miasma, it’s impossible to resist.

Indeed, with a bit of Knife-y drama and a touch of Missy Elliot flair, the lone songwriter packs a muted wallop. 'Be Ache' slams me to the wall every time, a battery of slugs churning underneath as Georgia shudders under sinister designs – ”you’re making me / the enemy”. It’s hard to tell what she’s the victim of, but the way she drips and glides under the underbelly of this seems frightening enough.

And when Georgia wants to swoop low and slow down, she does so swimmingly. 'Hold It' glides like a dream, a grandiose ice chunk of OMD-flavored pop with baroque crackles and a warm urban thump; 'GMTL' creeps cat-like with an alien grace much like FKA Twigs; the eerie closer 'You' evokes Benin City at their chilliest (although let’s face it, Georgia – Josh Idehen has you beat in close quarters espionage and lyrical dexterity). Only the quiet, chime-y ballad 'Heart Wrecking Animals' falls flat in such tin-studded company.

However, Georgia’s violet ritual peaks at the single 'Move Systems'. Shuddering from all sides with a rattling thud, it feels a bit like M.I.A turned inside out, or maybe Grimes in a fog, maybe even a sassier 23 Skiddo – and Georgia is her most devilish here, giddy with conspiracy, howling at the moon for a cause that never quite materializes. What are these systems? And how shall they move? One only asks these questions outside the circle; within, she is chieftain of the night, a deviant youth padding down the alleys at night, finding allies in drug dealers and fellow ne’er-do-wells. You get the feeling (again, outside the circle) that some sort of voyeurism is goin’ on here, that Georgia’s indulging in some romantic, revolutionary fantasy – but even if you can’t find a working manifesto in 'Move Systems', you can at least jive with the groove like the queen of the step team (trust me, I have).

Anyway, it works because Georgia has THAT kind of voice, the kind the PR folk call 'versatile'. She can cut through the electro massage murk (that’s a compliment) of 'Nothing Solutions' with Björk-high hopes; she can tame the slightly obnoxious swagger of 'Tell Me About It' with a velveteen coo that even makes me swoon. But it’s the way she shudders – like on the previously mentioned 'Be Ache', and also on the prickly, Depeche Mode cocktail 'Digits' – that really gets to me. Georgia can’t belt out across stadiums, but she can flex and twist into whatever crawlspace she finds herself in.

So. It’s an exciting world we live in, innit? Now one person can wield an arsenal of editing tools in their computer and, with some due diligence and an ear for melody, unleash sundry spirits like a sorcerer in street clothes. Mind, Georgia hasn’t really got anything new to say, but then not everyone can spin sharp words from the get-go. This is the future, sucker, and while indie rawk bands aren’t going away any time soon, they better up their game.