The Colour in Anything 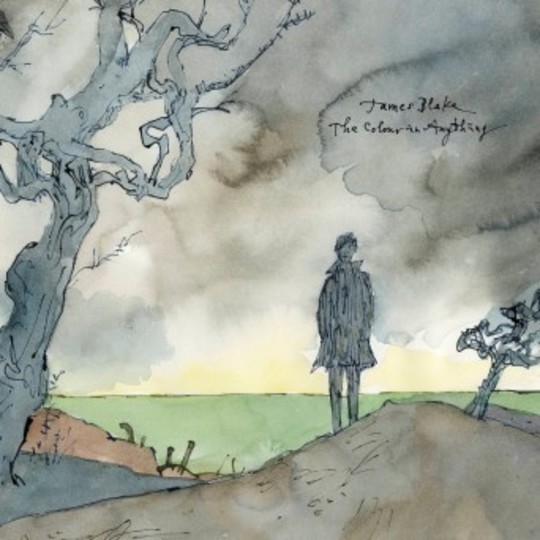 Hyperbolizing is a big no-no in professional music criticism, but fuck it: at the risk of pissing off the good folks at DiS, I must say – James Blake is the man. When you listen to his records, the experience is enough to temporarily set fire to all the Top 40 radio stations on the Western Hemisphere repeatedly playing the same dreadful output of whatever manufactured teenage icon is the current flavour of the month. Blake’s velvety, smooth vocals have singlehandedly brought the word 'swoon' back into contemporary linguistics, and men are equally entranced. By now, the ridiculous squabbling about whether or not Blake is dignified enough to ascribe to the dubstep genre have quieted down, and the man’s talent is undeniable at this point. Even Kanye West, the self-assumed sire of all-things-good-in-music, has welcomed Blake into his lofty inner circle with open arms.

With The Colour in Anything, Blake has released another album that is sure to make critics and fans keel over. As with Overgrown, Blake has expanded far beyond the sonic roots he forested on his self-titled album, and much of the material on The Colour of Anything doesn’t sound anything like dubstep.

Awash in sonic textures, the album commences in a leisurely, yet bewitching manner. Instead of the mega fireballs of sound we are used to from quote unquote 'real' dubsteppers, Blake thrives in frostbitten niches. There is almost a funereal tranquility in the first moments of“Radio Silence,” but a cavalcade of pronounced synths and tempered drum taps buttress Blake’s melancholy crooning. 'Timeless' is a sonic hydrant, but in Blake’s masterful hands, he’s able to chisel the necessary components of a melody and assimilate the spliced chords into a succulent whole. According to Blake, Kanye was a late exclusion from the track, but nonetheless, Yeezy’s emblematic 808 kick drums preface Blake’s soft poetics, which eventually herald an avalanche of enslaving synths.

Even though the word 'fucktastic' does not exist in either the Webster’s nor Oxford dictionary, I’m not going to let a few squiggly red lines prevent me from describing the latter half of the album with wholly warranted diction. Taking cues from the legendary jazz impresarios like Miles Davis and John Coltrane, Blake prefers to commingle his ingenious musical manoeuvres with other ingenious artisans, like the RZA-assisted 'Take A Fall From Me' from Overgrown and of course his fucktasticiest collaboration with Brian Eno on 'Digital Lion' from the same album. But like the cascading synths, the lending of Frank Ocean’s imprint on 'My Willing Heart' and 'Modern Soul' will cause widespread pools of saliva because of their mouthwatering nature.

Similarly, like the kindred spirits they are, Justin Vernon and Blake further augment the chemistry of their past concoctions. Navigating a looped sample and a plodding, mesmerising baseline, 'I Need a Forest Fire' is a standout achievement with an album already brimming with them. However, the humdrum feel of their collaboration on 'Meet You in The Maze' seems out of place among an album full of futile-to-resist sonic seduction.

'The Colour in Anything' not illuminates Blake’s decision when naming the album, but how he went about the creation of it. The track’s soft, yet assertive piano strokes, and absence of synths and looped samples is the sign of an artist expanding an already incredible reach. According to Blake, 'I explored sitting at the piano and singing a lot more.' While there is still plenty of those addictive sonic downpours, The Colour in Anything is arguably Blake’s most create cloudburst to date. In the liner notes for Miles Davis’ Bitches Brew, esteemed cultural critic Ralph J. Gleason wrote: 'Sometimes we are lucky enough to have one of these people like miles, like dylan, like duke, like lenny here in the same world at the same time we are and we can live this thing and feel it and love it and be moved by it and it is a wonderful and rare experience and we should be grateful for it.. It’s high time for Blake to be added to that list.