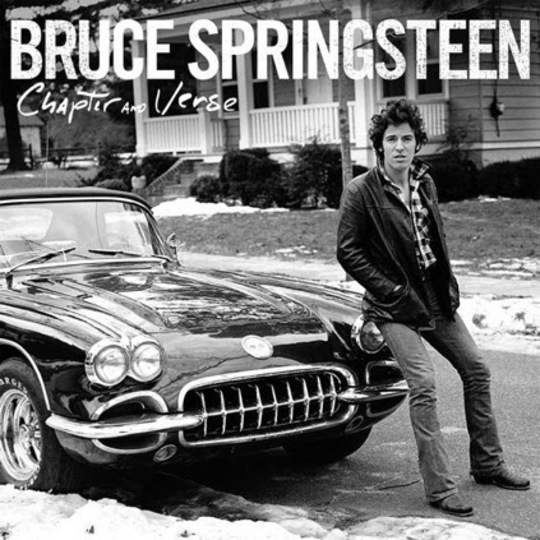 I’ll begin with a caveat. Chapter and Verse is a slightly unusual record: a companion to Born to Run ; not the song or the album, but rather the inevitably-titled autobiography from Bruce Springsteen (yes, Alan Partridge did something similar). It is therefore a little strange to be reviewing the record because, er, I haven’t been sent it (yet?).

This is a collection of songs hand-picked by The Boss, which ostensibly traces his musical history from its earliest days, telling a story that parallels the one in the book. There are five early unreleased tracks and there are plenty of heavy-hitters that follow. As I can’t tell you how well that reflects the book, well, this might be a better review for those of you who aren’t much into your reading. Although I’m not sure how that works.

On the face of it, the first six tracks here are by far and away the most interesting, given we’ve never heard them before. ‘Baby I’ and a cover of Willie Dixon’s ‘You Can’t Judge a Book by the Cover’ are cuts from 1966 and 67 respectively, when a 17-year-old Springsteen was the guitarist and singer in The Castiles. That both are rock and roll numbers is expected; the heavy gospel influence – you can barely hear Bruce over the female vocalist on the former – probably shouldn’t be a surprise either, yet is.

From here we go into ‘He’s Guilty’ and ‘The Ballad of Jesse James’. Both of which are unremarkable on the surface, straight guitar rock and rollers as they are, with a heavier edge than the Castiles cuts. But then when you consider that Springsteen was considered a singer-songwriter in the Dylan mould when he first broke through with Greetings from Asbury Park, NJ it once again makes sense. He’s not yet the lyricist who wrote ‘It’s Hard to be a Saint in the City’ but it is interesting to hear how quickly that troubadour is shaping up.

To give The Boss his due credit, the progress leading up to his debut album could not be better fleshed out. ‘Henry Boy’, the final unreleased song here, is an acoustic number that begins sounding like ‘Pinball Wizard’ (as a side note, why does no one ever talk about what a massive influence The Who were on Springsteen’s music?) but quickly becomes an obvious forerunner to ‘Blinded by the Light’. Couple that with a solo acoustic demo of ‘Growin’ Up’ (which previously appeared on Tracks and, six songs in, we’re caught up with the Bruce we know. And this is where the album flies off in another direction.

Here’s ‘Born to Run’! ‘Badlands’! ‘Born in the USA’! ‘The River’! ‘The Rising’! Again! Who wants to hear the album versions of these put together on another compilation yet again? Well, I do, because I love Bruce Springsteen unconditionally and will genuinely never tire of hearing these hits, but I suspect that this is not a universally held opinion.

It makes sense that these mega-hits appear on an autobiography-companion album given the colossal effect they presumably (haven’t read it, don’t forget) had on Springsteen’s life. We can’t complain about the obviousness of some of the choices – five of his best-regarded albums are represented by the title tracks – nor the merits of each song over others on their respective albums; this isn’t, after all, a best of nor greatest hits compilation.

There aren’t really any notable absentees to ponder either, given Springsteen limits himself to one song per record. The only exception is that since 2005, he has released five albums yet only one song appears from them here: 2012’s ‘Wrecking Ball’. It could well be that, given he has been writing the book since 2009, those albums are too close to home, too fresh in his mind to warrant inclusion. It does feel awfully sparse for an 11-year period in which he released two absolute belters in Magic and Wrecking Ball.

There is only one way, really, to know if this album truly reflects what is, by all accounts, the frank and gripping story of America’s greatest ever songwriter: to actually read the damn thing. Ah Bruce, you clever bastard.

Born to Run , the autobiography of Bruce Springsteen, is out on 27 September through Simon & Schuster._

I Had A Dream That You Were Mine