I'll Be Your Girl 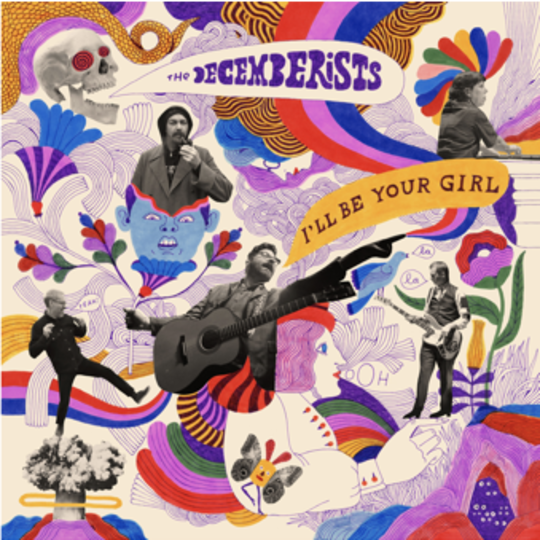 If every band’s journey is a novel, I’ll Be Your Girl is certainly The Decemberists’s redemptive chapter. After nearly 13 years of continual excellence, 2015’s What a Terrible World, What a Beautiful World was everything that their previous records had keenly avoided – plodding, cliché-driven, lacking in any true wit or the caustic folk-tales that had propelled the band to attention and kept them there. Gone were the absurdities, the sprawling, magnificent fairy-stories, the cerebral whirrings and clicks of a band who were bold enough to bring David Foster Wallace’s Infinite Jest into a pop video. Instead we were given a dialled down, diluted and fundamentally tired album from a band whose previous output had thrilled, enraptured and echoed joyously over the years. It was a cause for mourning; The Decemberists no longer seemed themselves.

Thankfully I’ll Be Your Girl is an entirely different beast: a fundamental exhalation of relief, release and sheer entertainment. Much has been made about the band embracing a more contemporary and fuller sonic palate, but this is textural only, and still seamlessly fits into their double-stitched classic songwriting. What is different here is the enthusiasm and the energy behind the project – the band sound engaged and excited again. But not before we get the pleading catharsis of opener ‘Once in My Life’ where, against the electronic undertow, Colin Meloy appears to yell in genuine anguish. For a band who have always been wily observers – a comfortable distance away from the action – this seems disarmingly frank and raw, though thoroughly compelling. The similar electronic feel penetrates into the chime and chatter of ‘Cutting Stone’ and the Atomic-esque mirrorball disco of ‘Severed’, and even resolves into a glam-rock march-stomp on ‘We All Die Young’. But ultimately, it is all about the songs and here the band truly return to form. ‘Your Ghost’ is a tremendous galloping swirl of sound and ‘Everything is Awful’ breaks gloriously down into call-and-response vocals whilst guitars stomp and storm around. Best of all is the stunning, grandiose and sombre ‘Rusalka, Rusalka/The Wild Rushes’ which echoes The Crane Wife’s title track and ‘The Island’ in its ability to shift tone and texture on a whim. In an album mostly comprised of bright, brief pop gems, its articulate sprawl anchors the record magnificently, pulling the whole project magnetically together.

There are false steps, and these do keep ‘I’ll Be Your Girl’ from matching up with the band’s very best records. ‘Tripping Along’ is (admittedly pretty) filler material and ‘Sucker’s Prayer’ veers far too close to lighters-aloft stadium Americana to fully connect. And there is occasionally an overall lack of coherence in some of the sequencing, though admittedly this may be as a result of the band’s predilection for conceptual works, something they clearly eschew here. But overall, this is a strong and thoroughly enjoyable record – full of bold ideas, bright colours and the charm and lyricism that make The Decemberists so fundamentally engaging. As they sing on the charmingly rhyming title-track coda “When fortune has long-betrayed you / and you’re looking for an arm to stay you / I’ll be your girl”. Girl or boy, The Decemberists have been there to drape a drunken arm around in the absence of fortune for the best part of 15 years now. The good news is, the tone in that arm is firmly set again. A genuine and welcome joy.