I Have Fought Against It, But I Can't Any Longer. 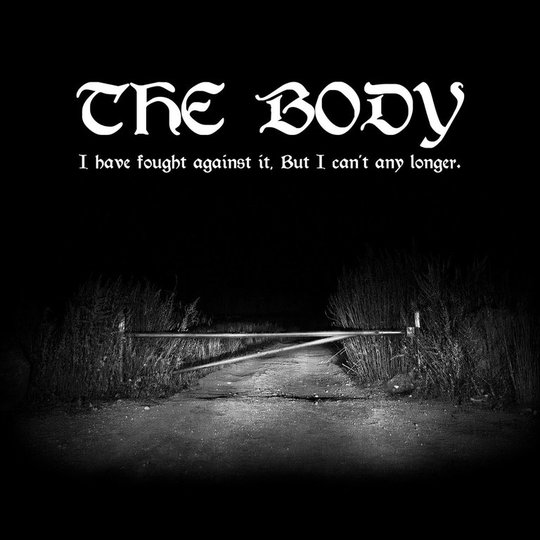 The Body’s Chip King maybe has the most terrifying howl of anyone in metal’s outer limits. True, extreme black metal acts like Gnaw their Tongues and Jute Gyte are polluting Bandcamp with their brilliant festering wrongness at an prolific rate, and they push the boundaries of wretched vocal depravity. But King’s abstract feral shriek is detached from any metal affectation, sounding like snuff movie death screams, shot through with abject despair.

He’s got lyrics in there (look them up), but you don’t need anything that explicit to get the unrelenting dread and bleakness summoned by King and his production partner and drummer Lee Buford. I Have Fought Against It, but I Can’t Any Longer is taken from a line in Virginia Woolf’s suicide note, and the album ends with an eight-minute reading of a passage by Czech author Bohumil Hrabal, a desolate signposting of his death by jumping from a five-storey window. In between, they stress-test the breaking point of heavy music, with elements of industrial, noise, sludge metal, dub, dark ambient and choral arrangements.

I Have Fought Against It is the Rhode Island duo’s seventh studio album – they’ve also seven collaborative LPs – and it builds on last year’s No One Deserves Happiness, which they’ve called the 'grossest pop album of all time'. ‘Pop’ is a real stretch here, but you can see where they’re coming from – No One Deserves Happiness rewired their sound with added electronics, a TR-808 drum machine and the odd hip-hop beat pattern. This time, they’ve built the album from their own piled-on samples rather than guitar and drums with post-production. It’s a further step outside their restrictive metal boundary, nudging them towards the industrial noise collages of dälek or the frazzled digital fry of Death Grips.

Regular collaborator – and surely honorary member by now – Chrissy Wolpert does offer a way out of the darkness with her choral singing, and she’s the first voice you hear, on opener ‘The Last Form of Loving’, amid a gentle pulse, strings and a swirling breeze. This eases into the hymnal gothic techno of ‘Can Carry No Weight’, which channels the amniotic 4/4 kick of The Field or Wolfgang Voigt’s GAS.

Grab these moments of respite when you can though, as other guests are more intent on slitting your nerve-endings. Kristin Hayter from Lingua Ignota adds operatic heft to the downtuned dirge and symphonic strings on ‘Nothing Stirs’, but that call to “march on” switches from defiance to despair, as she finishes the song in retches. Hayter also writhes between King and Uniform frontman Michael Berdan on the industrial blunt force trauma of ‘Sickly Heart of Sand’, battered by red-lining percussion and oppressive static hiss.

Berdan’s distorted Al Jourgenisms are all over the epic ‘Partly Alive’, a galloping malfunctioning sci-fi dystopia, while they sneak in a sample of Eek-a-Mouse’s cult reggae classic ‘Noah’s Ark’ on the scraping mechanised sludge-dub of ‘The West Has Failed’.

While much of the album has you spitting out quicksand, the clear escapism theme of ‘Noah’s Ark’ is a hand dragging you out of the quagmire. And with the amount of misery The Body are offloading here, you’re gonna need a bigger boat.