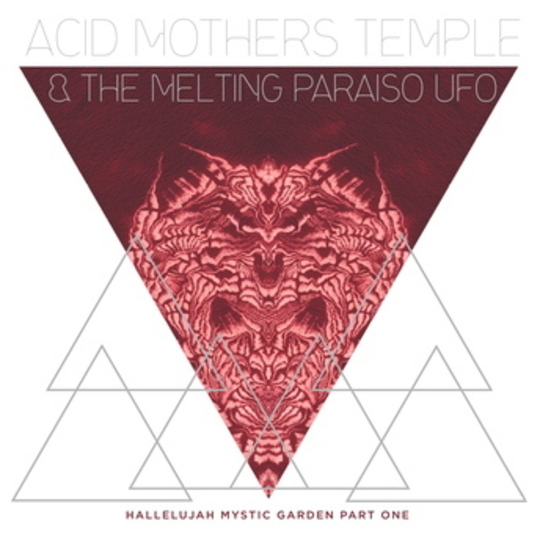 Perhaps as a tribute to their initial epoch, Acid Mothers Temple & The Melting Paraiso UFO are releasing their latest recordings on LP format only, over two separate dates. Hallelujah Mystic Garden Part 1 one features only two tracks, covering the full A side and B side of the record. Part 2 is due to be released late in 2018.

The A-side, ‘Cometary Orbital Drive’ is one sustained 20-minute fragment consisting of variously layered melodies. The Japanese group make extensive use of various effects pedals and synths, creating high pitched frequencies and synthesised crescendos and decrescendos which give the whole album their signature sort of ‘astral travel’ tone.

The screechy outer space sound feedback loops are endlessly repeated. Layers of guitar form quickly in patterns which to spiral at various intensities but uphold more or less the same rhythm. Eventually there are a few snare beats which prelude a funk bassline, this is the only pattern that seems to shift and change. Eventually the discipline of maintaining the same few bars on endless repeat starts to unravel and the sound gets pretty gnarly, with all the guitars and even drums jamming out with very little to hold them together, a total dissolution of the structure set up earlier in the piece.

The B-side ‘Third Eye From The Black Sun and Shadow Moon’ features shrieking vocals by Cotton Casino, high-pitched and ethereal as if struggling to rise above the guitars grumbling and whirring around her. Cotton sings in the same way that the other instruments play, by repeating herself in loops over and over, finally giving up to let the guitar bang on.

Around halfway through the track the tempo makes a surprising shift – the sound suddenly becomes clearer, and the riff sounds for all the world like a psyched-up Metallica into, teasingly played over and over without the explosive release we're conditioned to expect.

The effect of all this looping is to relax the ear and make the listener settle in for the long haul. Maybe it’s called progressive music because you never arrive, journeying forever and gradually giving up on even your own conventions. Acid Mothers Temple & The Melting Paraiso UFO neither shock nor betray – the more likely effect on listeners is a gradual lull, so steady in progression that you never even notice the final collapse into chaos.

Flashback Romance (Side A)