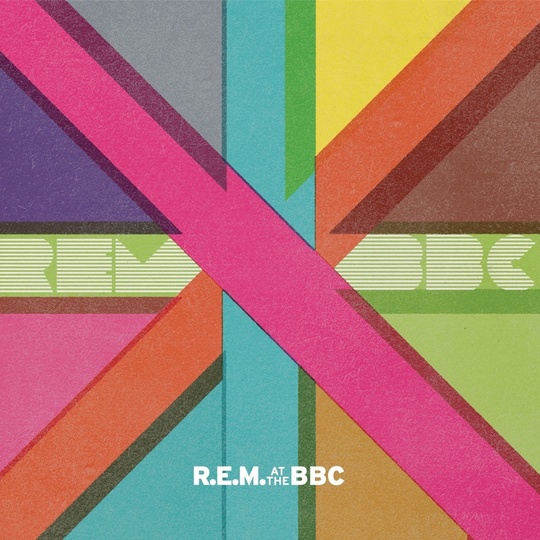 Now, YOU may not need a seven-and-a-half-hour, eight-disc R.E.M. live album. Heck, I suppose I don’t really need one per se. But Live at the BBC is another excellent chapter in the band’s well-drilled afterlife, which has seen a twenty-fifth-anniversary reissue campaign that began when R.E.M. were still a couple of records from the end continue in spectacularly orderly fashion - latterly with actual press support from the three members of the band who remain at large in the entertainment industry.

I doubt Live at the BBC will be getting quite such red carpet treatment, but its release certainly seems thoroughly justified, largely because at this point there is no definitive R.E.M. live album. In part that’s because they never exactly released one as a total standalone (the deliberately somewhat obtuse Live at the Olympia aside). Their excellent live films Tour Film and Road Movie are closer to it, though as much because of the arty aesthetics as because either the Green or Monster tours inherently defined the band. Indeed, the copious concert recordings that have emerged with the reissues series are testament to the fact that R.E.M. have consistently been shit hot live, and that pinning down any given era as definitive seems a bit silly. So perhaps Live at the BBC is the definitive R.E.M. live record, insofar as it maps out every era of the band at once.

Well, most eras. As the title suggests, it compiles the sessions and concerts R.E.M. did for the BBC over their lengthy career. Perhaps somewhat inevitably, this means it’s focused on the Nineties onwards, ie after they became famous in Britain. While there are fairly major difference between the raucous 1995 recording of one of their two Milton Keynes Bowl shows on the Monster tour, and a gig in a London church a decade later to promote Around the Sun, it’s fair to say the presence of the popular hit ‘Losing My Religion’ is not one of them - the song pops up four times across an album on which five out of eight discs are from the years 1995-1999.

Still, a heckuva lot of heavy lifting vis a vis representation of the band’s first decade is accomplished via a ferociously good 1984 show from Nottingham Rock City. It’s difficult to now imagine a world in which the Beeb would broadcast pretty much the entirety of a gig by... well, anybody, but especially band whose most recent album (Reckoning) had reached a lofty 92 in the UK charts. But they did and we should be grateful (I assume the band were a bigger deal over here than those chart positions imply, though it is nonetheless amusing to hear host Pete Drummond enthusiastically introduce them as ‘those boys from Athens, Georgia’ as if that would mean anything to 90 percent of his listeners).

Anyway, it is as ever pretty extraordinary to hear the band during this period - they were wild; wild in a genuinely elemental, shamanistic way, folk mystery and post-punk attack combined into something that sounded like neither. Where Michael Stipe sounded old as the hills on the early records, live there was a howling vitality to him, the incomprehensible nature of the lyrics irrelevant in a voice that felt more like a strange manifestation of nature than a human tool. The sheer momentum with which the band clatter into ‘Radio Free Europe’ and ‘Box Cars’ is staggering. With four tracks from the unreleased Fables of the Reconstruction performed and even one from Lifes Rich Pageant, the show is as good a document as you’re going to get of the band at the peak of their ‘indie’ years.

A shortish Out of Time-era acoustic session aside, the set then leapfrogs over a decade, to the second of their two stadium shows at Milton Keynes.

The sense of transgression, of something extraordinary - and perhaps otherworldly - happening is pretty much gone. But in its place we have the world’s best rock band, something R.E.M. more or less continued to be up until the end.

Not that ‘rock band’ should be taken pejoratively. The music - especially on Monster and New Adventures in Hi-Fi was still weird. But even with his voice subject to a myriad distortions, Stipe seems far more of this world - his vocals are technically more proficient, he works the crowd, he yells “cmooooooooon!” at the climax of ‘Man on the Moon’. And the music is bigger, crisper, without the bleed and clatter of the early years. But, crucially, the band always sound like they give a shit - none of them were flashy musicians, and better the furious enthusiasm and palpable sonic attack that they consistently brought to bear than any wanky solos or other rock star trappings.

Comprising the Monster concert, a 1998 Radio 1 concert, their 1999 Glastonbury headline set, and a 2004 show in St James Church, London to launch Around the Sun, it heavily reflects the period in which the band were more popular in Europe than back home (the setlists to the Radio 1 concert and Glastonbury were very different, but also both in support of Up). For my money this is a pretty good thing: the band became a bit sniffy about these years when they relaunched themselves at the States with Accelerate, so it’s nice to hear them sounding enthused and energised over records that absolutely doesn't deserve their iffy reputation. Okay, the decline had clearly started with ATS, but it’s about a gazillion times better than the band themselves have suggested it is, and was always much better live – the St James concert is a very worthy end point.

Look: there are a lot of live documents of R.E.M. out there, with the reissues or as soundtracks to their sundry concert films. None of them can really claim to be definitive, though, because, they’re all snapshots of different eras, and R.E.M. were pretty much untouchable for their first 11 albums. Live at the BBC is obviously preposterously big (I'm kind of relieved not to have been sent the accompanying DVD), but actually that’s kind of fine in the digital era – it’s not that old fashioned beast ‘the live album’, but a whole sprawling history to immerse yourself in, eras hurtling by.