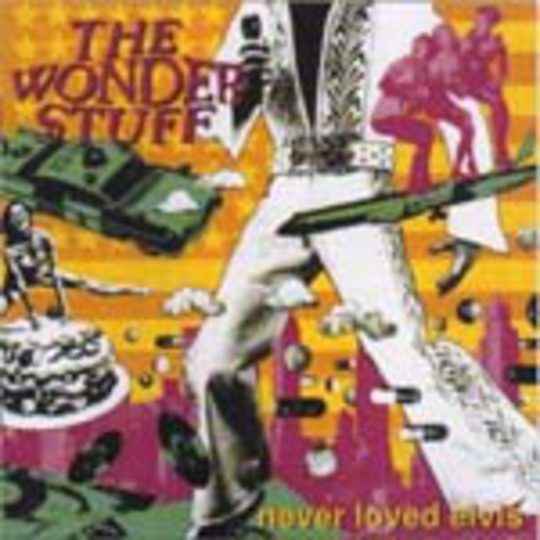 I'll admit it. I didn't even know The Wonder Stuff existed until September

1989, when some young girl I madly passionately loved brought a copy of some

blue record called Hup into school. I fell in mad passionate love instead

with the record instead. A far better choice. I don't know where she is now,

but I'd like to thank her for changing my life for the better.

my life. When everything else had fallen apart I still had Mission Drive's

heartbroken lullaby to keep me company. Life is not what we thought it was.

The summers were long, drinking in local pubs and drunk on miniscule amounts

older than we actually were. A few years later we did it to feel younger

than we actually were.

Of course, my first introduction to the beauty of Elvis, came when some kid

1990 and it became the mark of cool, to have a copy of this tinny, hissy

cassette on your massive, chunky walkman. I got one, eventually.

And then, as they say, the word was out. The Size Of A Cow became top five,

and The Wonder Stuff became the biggest, best loved secret there was. They

didn't have fans, this band. They had friends. Everyone wanted to be in The

Wonder Stuff. I swore Miles was keeping the seat warm for me until I felt

ready to front the band again.

waited a long time to see them in the flesh, and my chance came sooner than

I thought. One night in a goth pub in a back alley it became clear they were

centre. I'm in there - falling off someone shoulders during the chorus and

yelling the words out of time. That night, everyone wore old Stuffies shirts

and went to the Hummingbird to relive our good fortune. We got drunk in a

manner only the stupidly young can.

the highlight. It was the most exciting thing to ever happen in that

godforsaken armpit of the world called Walsall. It cost me three weeks

pocket money to do it, and all day being crushed by the faithful thousands,

living off Ribena and sweets and drinking the torrential rain, but it was

one of the best days and nights of my life. So far.

These days, I don't listen to the album much. It captures them at an

rollercoaster of high spirited youthful madness as the Johnny Public

realised that we'd been force fed brainless crap for years, and now we

wanted, no, needed a band with balls, wit, and haircuts.

I must have heard it every day for at least three years, and after the

walkmans in halls across the world. Over the next few years, despite

constantly flirting with bankruptcy and an excessive overdraft, I managed to

shows supporting various nobodies in dingy Uni bars, and splitting up in a

blaze of glory at the Phoenix Festival. A string of hit singles followed,

including the bizarre Number One in the shape of Dizzy. On more than one

my last bus home, eating cold pizza in the rain, knowing it was worth it. I'

d do it all again if I could. And come December I will.

But that's another story. And of course, like any good band does, they

reformed just to see if they could still do it.

I can't wait until December 2000, when I get to see every gig of their

reformation tour. It's not a chance to relive the past, but an opportunity

to embrace the future.

embarrassment. I reckon that's the sign of a good record myself.