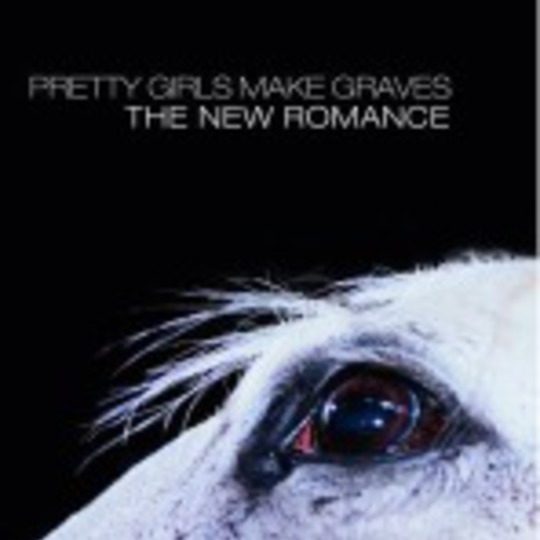 "See the strange boy talking to his shadow. He’s got a secret to tell. His imaginary friend knows everything."

When I was a child I wanted to marry Medusa. I don’t know why it was exactly; maybe the idea of a green girl with snakes for hair meant she had nothing to hide. Nothing to hold her back. No fears and no vanity affairs. I wanted to live with freaks and dance to the sounds from torture chambers. And now, years from then, Seattle-ites Pretty Girls Make Graves have made a record and stirred all these feelings in my head.

Having already made a name for themselves as one of the most exciting prospects to haul themselves outta the American rock scene (and, indeed, the Seattle scene - see also The Blood Brothers, These Arms Are Snakes and Cobra High) in decades, they drop a very special record, indeed. These punka rockas with ideas (it was always about ideas! Somewhere along the track that got forgotten and things got derivative) have decided their place is in that underbelly of society, that shadow place that’s waiting for something more, praying one day soon that something historical will happen to us. If you’ve ever wondered why our history is all about negative guff like bomb blasts, poison scares and famous people dying, then they’ve made this record for you.

PGMG take honesty, sum up all that we know is shit today (right from pill popping depressos to our inability to commit to anything through work-related insomnia and back out to drug problems), rattle it around a hail storm of noise, find the melody, find the harmony, pump in some party basslines ('Chemical, Chemical'_ sounds ripped straight from Wacko's 'Smooth Criminal'_) and then, as if from nowhere, a creature crawls out of the sweat mist, craving sex, telling surreal stories about ghosts with secrets and asking why people are waiting and not creating. It’s Medusa; she’s talking to me in tongues, hissing every so often. This doesn’t happen everyday.

And amongst this and my thoughts about Medusa (the symbol of a positive backlash?), the guitar strings turn to spaghetti, disco-beats of yore fall to the floor, and there, right there, ’The New Romance’ takes over the world and it becomes a better place.

...Oh I don’t know, just go buy the record; it’s on Matador, it’s a damn sight better than all the hyped-up, lifeless, floor-obsessed 60s/70s/80s carcrash trash that’s passing for wock’n’woll nowadays. 'The New Romance' is why I can't learn to love bands with asymmetrical hair (apart from the Trail o'Dead, o'course!). This is a record, which sounds like now, and our time _is_ now. Suck it in, spit it out. Deal with it. Better it.