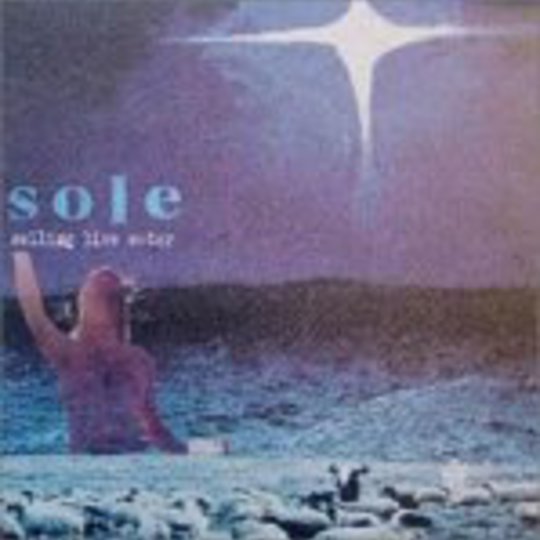 There is a big picture, but the paint is running. ‘Selling Live Water’ is a vivid corner of the canvas; an exhausting 90 BPM ride through the eyes of Tim Holland, head of the Californian hip hop collective anticon - one which deftly juxtaposes the personal and universal, barrelling past old friends, the 'war on terror' and sole himself – there is no persona here. Just Tim and a paper-thin alias. Hell, this isn’t even paper thin - he could be thinking into the microphone.

And he thinks like someone who understands that they'll only ever grasp corners of anything. In the liner notes, sole refers to his attempts to break down the propaganda he is surrounded by, and political commentary serves as a vital facet of the album, to the extent that the bile with which he regards his government rises to drown the individual who even begins to accept a life within the country’s urban veins. Which is where the self-revulsion begins, tied inextricably to the world at large; to the culture gulfs that exist in every city, to the materialism inherent in even putting out a record; sole raps "you make songs on CDs that vanish in a vacuum of money made and things piled on shelves" – he sounds tired of his own voice.

The constant vitriol here doesn’t make for easy listening, and sole isn’t in any way mysterious. He’s honest, and as such his music comes with all the baggage we associate with such backhanded compliments. After about the fourth cracked moan of "my poor ageing face" on 'Slow Cold Drops', it’s spelt out fairly clear that this isn’t a party album. Nevertheless - if you can face up to someone else’s soul bearing without wincing - 'Selling Live Water' is one of the most engaging pieces of music to drop in 2003. Holland’s gruff rap moves between conversational drawl and an arrhythmic bark that torpedoes over the understated mix of samples and live instrumentation that acts as a backdrop more than an accompaniment; a swirling mixture of head-nodding beats (try listening to ‘Pawn in the Game Pt.1’ without at least tapping your foot) lounge-jazz and rock guitars.

The production is progressive, but not difficult; the mixture of sampled melodies and live instrumentation gives the whole record a submarine clarity and (as with many anticon releases) the more listens the listener gives, the more content the album returns - the subtleties of the production, another spat out line that failed to register last time you heard it. You grow to know sole, and yet, of course, you don’t – but the impression that you do is an aim achieved. By creating a connection between artist and listener (however real), _‘Selling Live Water’ _genuinely feels like a trip through someone else’s psyche, and if that psyche only constitutes a corner of a great big picture that we’re all a part of, it’s a trip to see how that corner connects to the rest.