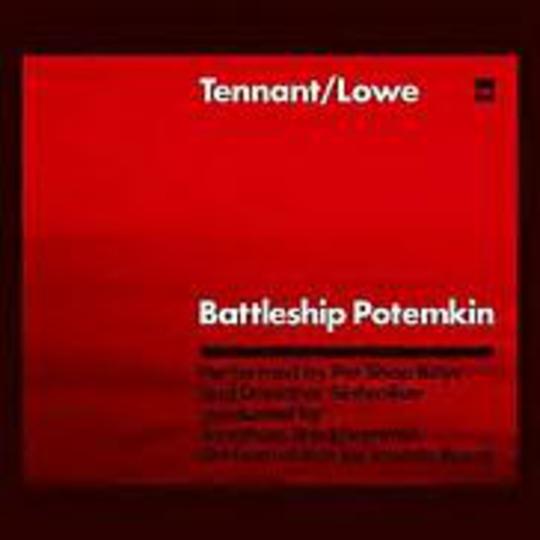 First, a bit of history for you. In 1925, Sergei M. Eisenstein made a film describing the mutiny of the sailors on the Battleship Potemkin and their part in the 1905 revolution. The film was banned, censored, destroyed and generally disapproved of by Western Authorities as Dirty Commie Propaganda, and the censorship wasn't lifted until 1954. In 2004, fifty years later, it was screened in Trafalgar Square to an audience of 40,000 – and accompanied by a live performance of Pet Shop Boys’ purpose-written film score.

So: this is a CD with the kind of History to which it’s rather hard to do justice. The line between the pitfalls of cringe-worthy melodrama and of distancing yourself from the subject to the extent that you render the context irrelevant is a hard one to tread. Pet Shop Boys, however, pull it off, creating a soundtrack which both makes sense in context and stands alone as a record.

The songs are largely instrumental, mixing the heavy, unnerving industrial threat often displayed by Kraftwerk with the soaring melancholy of strings provided by the Dresdener Sinfoniker. This makes for a sound both spacious and intense, the kind of sound which fills the whole room and monopolises the ear’s attention in a manner which one really doesn’t expect from a purpose-written soundtrack. It’s impressive, weighty music with immense emotional power, winding the tension to a pitch in such a casual, natural manner that you don’t realise you’ve been holding your breath until the sound crashes and you breathe out again. Or, alternatively, dropping the tension in favour of an emotion-besieging melancholic ache which welds the persistent beats of electro to the drawn-out ache of the string section and proceeds to hold the listeners emotions utterly hostage without any apparent effort.

This is manipulative stuff, then: stirring, idealistic, heartstring-tugging and generally extremely moving. But, importantly, it's intelligently manipulative - and, considering the context, that's exactly how it should be. Battleship Potemkin has a majestic grandeur which is, quite literally, breathtaking and which doesn’t shrink from attempting to do justice to the themes it soundtracks. If it’s this affecting when it stands alone, the impact it has in conjunction with the film must be quite something. Pet Shop Boys are planning live performances of the soundtrack next year, and I for one will be making a note in my diary…

Doors/Failed Attempt At A Love Song

The Past Presents The Future