Under A Billion Suns 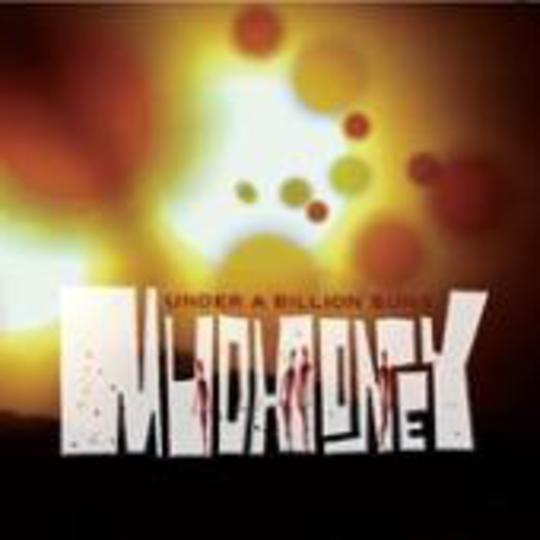 Whoever first formulated this idea of growing old gracefully clearly didn’t bark the command to take up pipe and slippers as loudly as they should have, as one motley crew round Seattle way haven’t heard a thing about it. Under A Billion Suns is, perhaps, Mudhoney’s most boisterous long-play release since that debut many a moon ago. Their ears may be wholly consumed by a constant buzzing sound these days, but the rock these four men so easily brandish is every bit the equal, if not the better, of that deployed by so-called peers half their age.

Vocalist Mark Arm, in particular, is a man whose day of rock ‘n’ roll retirement is many the turn of a desktop calendar away; indeed, the man may be comfortably in his forties now, but his performance at the microphone remains as electric as it was in ’88, syllables delivered savagely and liberally doused in spit. Under A Billion Suns sees the sometime MC-whatever-number-it-is-today singer exorcise many a demon born of anger raised from the evening news – there are zero no-brainers here, every song containing lyrics of considered political critique. Opener ‘Where Is The Future’ sets the thematic tone well, Arm requesting that he wants “a world run by giant brains, instead of small-minded arrogant fools”. No need to name names, least of all when later numbers are characterised by talk of armed conflict and needless deaths overseas.

But this isn’t a record bogged down with overbearing opinions: the political facets are primarily straight-of-face factual, leaving the emphasis firmly on the band’s ability to rock the f’ out ‘til their brothers the cows come home. Like their preceding full-length, Since We’ve Become Translucent, blasts of horns punctuate a selection of songs to great effect; what’s different, noticeably so, is that no longer are Mudhoney employing psychedelic freak-out trickery, nor are they looking for their listeners to spark up a sizeable doobie during their latest’s duration. This is a rock record in near-enough its purest form, albeit without the head-down dirge of a ‘Touch Me I’m Sick’. That’s a good thing: Mudhoney haven’t ever carbon-copied their previous material to sell their wares, leading to mixed receptions come release dates. This, though, is evidence of a slight dip circa Tomorrow Hit Today absolutely rectified.

An instrumental break provides the greatest moment of lose-yourself immersion: ‘A Brief Celebration Of Indifference’ is speedy and saturated in excellent riff work, an ideal track to drop mid-set at any indie-rock club. If you can’t dance to it, you’re either paralysed or dead. Of the slower, more reflective moments, ‘Endless Yesterday’ shines as brightly as a billion suns, but it’s really when all pedals are punched and amplifiers glow red as their seams are threatened with splitting that Under A Billion Suns really impresses; closer ‘Blindspots’ is up there with their most acerbic work. It leaves the most significant impression its authors have made for some fifteen years, an incredibly commendable feat in these heady days of rock and roll recycling.

Raise a glass, do, to the true champions of growing old disgracefully.

Rating follows the interview below

The new record’s finished, out there, available to all: would you change a single thing about it?

I’m never 100 per cent happy about anything. This record, however, is very nearly perfect. I would have played better here and there in a perfect world.

The album’s been generating no little press because of its political angle – was it important to say some of these things now?

As one of the guitarists in Mudhoney, I was not thinking about the politics. The thing to point out is that when I met Mark in 1982, all of his lyrics were of a political nature. I, myself, love to boogie.

Speaking of boogying, every single club I go to still plays ‘Touch Me I’m Sick’. Does that get on your nerves at all? Do you get bored of it? You’ve done other songs, after all…

Through the years we’ve become a bit tired of all our songs at some point. ‘Touch Me I’m Sick’ is still in the set and we’ll be buried with it.

This new record, and the one before it, employ horns to good effect. Will further albums explore other ways of expanding the Mudhoney sound? Would you like to mess with peoples’ perceptions of the band?

Sure, we’ll do whatever seems like a good idea in the studio. We don’t aim to disappoint, but we don’t cater to anyone but ourselves. Some of those ideas will prove to be bad ones, I’m sure.

Is the world being run by a bunch of small-minded arrogant fools?

It seems like a bunch of assholes to me.

** As your initial peers have faded, are you surprised to still be where you are: able to sell records for a living, and play shows the world over? Have there been moments when you’ve considered tossing in the towel?**

We were very lucky for a long time, then things got darker, then the morning sun came over the hills. Pretty standard stuff. We are ready to rock.

** Was it easy returning to Sub Pop after releasing a few albums through a major?**

Sure, they had the back catalogue. It’s a very easy relationship.

You’re curating a day at the upcoming ATP in Britain: excited? Any bands you couldn’t get?

We’re very excited about ATP. John Cale could not be convinced, and Dead Moon were already booked. But the day will be a blast.

All Over This Town