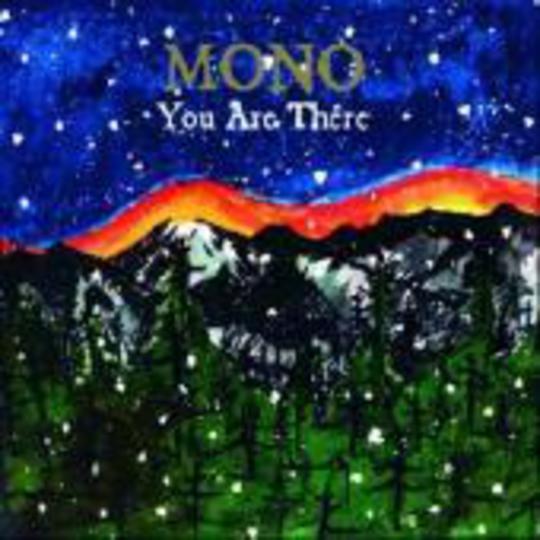 There’s only one way this is going to work: me to you, personally, laying it on the proverbial line. Zero so-called professionalism, zero regard for critical convention or ‘muso’ one-upmanship. This is what it is, this new Mono record. No words truly do it anything like justice anyway.

The facts, first: this, You Are There, is album number four from the Japanese quartet; it was recorded by Steve Albini; it sees Mono edge closer still to the classical spectrum, incorporating strings to great effect. It, as this ‘review’ truly should, features not one word of relevance (and this is where those facts cease); not once is a crystalline serenity shattered for a line too obtuse to touch the majority. Not once does a single quarter of the band step forward to offer forth some nugget, some trinket, something of aesthetic immediacy but ultimate irrelevance. Not one, and why is clear; aficionados already know this. Mono don’t make music to take you somewhere; they don’t lay a map out for the listener and guide them on their merry way to some obviously forced plain of ethereal enlightenment. These are but the foundations, the basic building blocks upon which dreams are built and toppled, upon which a man can rest easy only so long, knowledgeable that eventually the structure will shatter, fragments raining for a thousand years henceforth.

Mono is the blueprint. You are the builder, the hard-topped henchman of your own next hour. Where you go once this album rumbles into life on your stereo, only you decide. How it moves you – vigorous, slightly, absolutely – is entirely dependent on your at-this-moment mood. You can read it, hear it, only two ways: either it grasps you, leaving you fumbling blindly through its entirety, entirely enraptured, or it renders you cold. Latter parties, these following paragraphs serve you no worthwhile purpose.

How, exactly, does an alleged critic accurately convey their thoughts, their feelings, now? Should they – I – strip You Are There back to its basic component parts: guitar, twice, bass and drums. Or should they indulge so far as is lexically possible, personally, as the record in question demands? Not for themselves, but because standard-issue terminology, the tried-and-tested adjectives and ulterior acts of referential relevance, simply don’t, can’t, summarise a record such as this. What is one – me – left with once the safety’s off and there’s fuck all in the way of a net beneath to fall into.

This is stream of conscious, as it comes, nothing more. If you’re wanting some artificial, hackneyed view on this record, please do look elsewhere. There you’ll find your safety nets, your rigged-into-position comparisons and generic pigeonholing. That’s where you’ll read about the record, rather than the after effects of. That’s where it’ll make more sense, this reviewing business. ‘Business’. The very word is tantamount to a tight grip about the throat, choking, obstructing. Not all music need be assimilated in such a secondary fashion; it doesn’t have to be dressing to experiences determined by factors beyond its immediate impact. It can be the experience.

Play _‘Yearning’, song three of six, for seven-and-a-half minutes. Take a breath. Deep. Exhale, travel. The music about you explodes as your own synapses tweak and tumble into an expanse of black – no sides, no grip, just down and down and down. Spiralling, dizzying, disorientating – the drums pound but your balance is so left of centre that no single foot can tap in time. Instead the body convulses, twitches and spasms – some kind of otherworldly ecstasy descended onto your tongue via your ears, bypassing your brain completely. There’s no thought, no predetermination. This just is. And fuck you if you’re about to get self-conscious about it: go, move, fall, stand, raise a fist so high you damn near lose an arm, the flesh about your shoulder stretching to some status beyond safety, the pain in your neck intense and wonderful, sharp and crisp and perfect.

And then sigh your own name in gratitude as the piece crashes to an echo of dust and bones twelve of its allotted fifteen-and-a-half in. Sigh theirs, sigh mine, sigh his; fuck it, sigh however you will: exhalation will occur, and how you shape your tongue at the time is entirely of your personal preference. Tell me latterly though, do; after all, I’ve laid my cards – proverbial, I have none to hand – upon this table, where they’ve laid since the very first line of this ‘review’.

‘Review’, the term is, in this instance, ridiculous. From a matter-of-fact point of view, every note here has been realised previously, not least of all by Mono themselves, yet with each passing second You Are There digs that bit deeper into your chest, into my chest, wriggling its way through sinewy muscle and brittle bone ‘til it’s such a part of you – me – that to offend it, to remove it, would surely result in an effect adverse to one’s health. It burrows slyly, as have its predecessors, so that come that first play you might even be of the opinion that what you’ve invested in is somehow clichéd; that it’s something that plays by the rules so well that it can’t possibly work on any emotional level.

I thought that way for all of three minutes, one morning, on my way to the station. By the time I took my seat on the train I was so enraptured that the next hour passed by me in a second. I can’t recount to you specifics, what songs really had me over a knee, bending to receive. Wait, that’s all wrong, the imposing analogy; the idea that these songs force the listener into a submission. I’ll retract a few steps: Mono is the blueprint, you are the builder; you've the wheel but they've the pedals, and their ABC is all backwards as a turn approaches. Really, the destination to which these songs point is absolutely dependent on the listener’s own feelings at that single moment. Be they short – the delicate grace of ‘The Remains Of The Day’ – or anything but – opener ‘The Flames Beyond The Cold Mountain’ is one of some that breach ten minutes with such ease that no patience is ever tried – these songs will be the catalyst to some metaphysical journey. You’ll rethink that ultimatum you issued to a borderline-former friend once held so dear last week; perhaps, even, you’ll realise that the actions of another that left you hurt weren’t entirely without reason, that your interests are in balance with those of another. In short, you’ll think clearly, concisely, bereft of the clogged cloudscape that so often blinds opinion.

Part those clouds, see actuality in its glory, hold my hand and I’ll shadow you every step of the way if need be; I’ll wander these corridors too, feeling with fingertips, gladly, smiling to no one but myself as vision becomes redundant. The dark’s there to explore: close your eyes and it’s no so intimidating. Close your eyes and the entire world gets that bit bigger…

Panic At The Disco

But It's Better If You Do