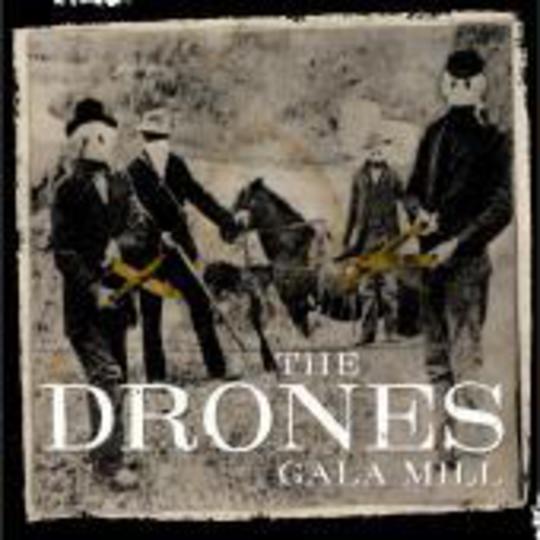 Previously I’d been impartial towards Australia’s The Drones, a four-piece who scooped The Australian Music Prize – ‘their Mercury’ – earlier this year for album-before-this Wait Long By The River And The Bodies Of Your Enemies Will Float By. I’d seen them live and left unimpressed, yet a couple of songs from the aforementioned long-player were good enough for me not to write them off. But come the release of Gala Mill, at the beginning of October, I was hardly racing to play their latest wares upon my return home from the office.

Then I found the record in my rucksack. Must’ve been there for a month – few weeks ago, this was. I’d been drinking – not too heavily, but enough to know about it – and was tired of whatever was spinning in my Discman at the time; I find reaching King’s Cross as good a time as any to switch CDs. Immediate immersion, just like that. How Gala Mill hadn’t clicked before, I forget. This is deeply dark stuff, the blues roughed up by a backwater punk and left to rot in the godforsaken desert. It’s the last bus out of town leaving without you on it; you’re out cold in the station, dribble down your cheek and an empty wine bottle at your feet, shoelaces loose. Vocalist Gareth Liddiard, he makes a man remember Nick Cave before he got too happy; he makes a man wish they had his bottle, his heartache, his sorrow. If only to sound this fucking fantastically miserable.

The love songs on Gala Mill, those that first touch the drunkard, cool rather in the cold light of sobriety, but the bitterest of murderous folk ballads here remain as bloodily brutal as ever they were when experienced in that place: where a stranger’s words come alive, fiery and flying all around, like bumblebees bearing holsters filled with molten lead. ‘I’m Here Now’, with its repeated “You’ve gone from perfect to divine”, doesn’t grate (or drone, chortle) when heard with fully attentive ears, but its positive sentiments aren’t half as appealing as those moribund outpourings of palpable melancholy that frequent other arrangements here. Each breath could be Liddiard’s last. Place your bets.

‘Words From The Executioner To Alexander Pearce’ – the spoken-word story of a man imprisoned only to escape, a man who died with six men dead by his hand and their insides within him – is as wonderfully graphic of lyrics as its title suggests, and as achingly tender at times as the most affecting of torch songs. Despite its central protagonist’s crimes, our narrator almost sides with him: “How can you burn more? You’ve been burning for years.” But the pièce de résistance is closer ‘Sixteen Straws’.

‘Sixteen Straws’ is the sort of song – although it’s barely a song, such is its instrumental minimalism – that stays with you long after its final acoustic strums have faded from the speakers; it’s the sort of song that, if heard in a semi-inebriated state, will make a man grab a pen, a pencil, a stick, whatever, and begin to scrawl onto any discarded newspaper the beginnings of a story. Their life story, perhaps; more likely some fantastical western tale; quite possibly a tale akin to that seen in cinemas in The Proposition. The colours in the mind’s eye upon hearing this song, again and again, are similar to those captured in the aforementioned picture. The Drones’ masterstroke here, the standout track of Gala Mill, is the story of men forced to kill each other to save themselves. Suicide or a death blow dealt by a dear friend: no winners emerge from this scene. Liddiard wonderfully articulates the horror of the subject matter – if this man was ever handed the reins of Jackanory, children the world over would grow up with ne’er a smile to be seen at the most festive of family and friend occasions.

Brilliantly inspiring while intoxicated, Gala Mill holds its own well under sensible, concentrated scrutiny. Its predecessor may not have wholly impressed, but a couple of wayward sidesteps into boot-scootin’ territories aside this is recommended. Not warmly, mind, as the only warmth here is that which steams from spilt blood.

Dits From The Commuter Belt