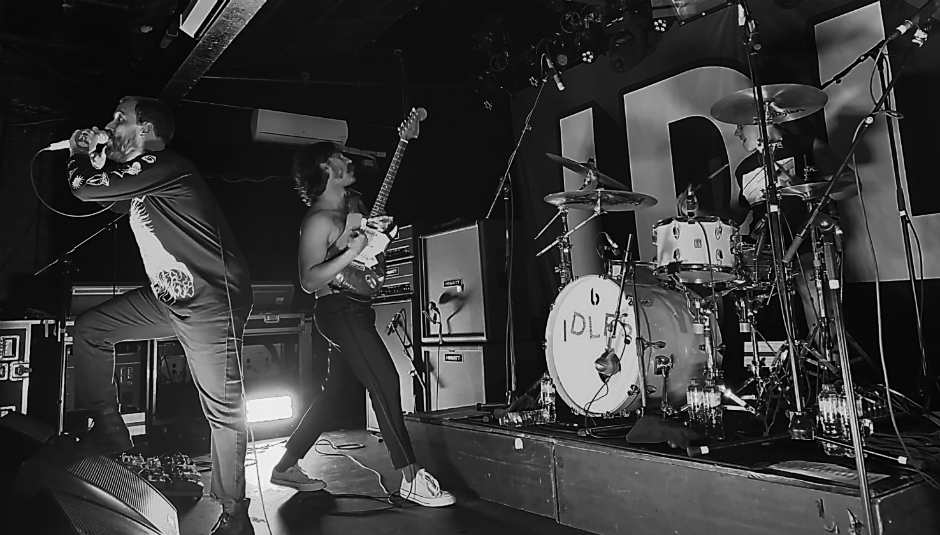 About two years ago, IDLES were still playing half-full toilet venues around the country, their screams for political change and vignettes of forlorn characters only half heard by the enthusiastic drunken attendees drawn to the chaotic nature of their gigs and enamored with their muscled sound, which leaned right over to the heavier side of post-punk.

Since then, they've grown to take the title of Britain's Most Vital Band in every music publication, attracted celebrity fans, had spats with other cult acts, and narrowly missing out on taking home a BRIT Award. This meteoric rise has been partially thanks to a rapid succession of LP releases including their debut Brutalism, which was name-checked in all respectable Album-of-the-Year rounds ups, followed by their sophomore offering Joy As An Act Of Resistance the next year, which saw the boys from Bristol smash into the Top 10. Both records were overtly political, attacking the Tory government, their attempts to break up and privatise the NHS, plus the demonization of refugees and immigrants by the right-wing media. They were also immensely personal, dealing with issues of depression, addiction and street-level violence, and gave IDLES' singer Joe Talbot a means to come to terms with the pain caused by the tragic loss of his mother and then baby daughter Agatha. Such grief would have overwhelmed most and certainly derailed any other band still struggling to get noticed. However, their unique ability to fuse pathos, empathy, and rage helped them rise to the top. But what happens when a rowdy bunch blows up and becomes huge, almost overnight?

Perhaps the most visible example of their change in fortunes is the legion of dedicated fans they now command. Calling themselves the AF Gang and hitting almost 16,000 members on Facebook, they are the driving force behind the rise in record sales, the growth in the size of stages on which IDLES now appear, and the inevitable selling out of each show. Their presence is immediately apparent at every gig owing to the copycat anti-fashion style mimicking the band, the pink, black and gold pin badges stating either the band’s motto All Is Love or simply AF Gang, copycat attire, and big grins all round reflecting the absence of cynicism conveyed by IDLES themselves.

Arriving early to inspect the support, the dark and moody band Crows, who have recently signed to Talbot and IDLES’ manager Mark Bent’s label Balley Records, the crowd’s reaction is initially somewhat muted. But this is in no way a reflection on their performance as Crows tear into their set, growling and roaring like a savage animal. Delightfully nasty and brimming with energy, you could almost forget that it has taken untold hours of practice to look this effortlessly cool as the acidic burns of guitar combine with dives of distorted wah wah, making for compulsive listening.

To be fair, it's not that they aren’t getting any attention from the audience – it’s just nowhere near the appreciation that they deserve. Third song ‘Wednesday’s Child’ is a real highlight as it gallops like the soundtrack to a mutated modern-day Spaghetti Western filmed in the dingy backstreets of a British metropolis on Saturday night, and it wakes up the crowd somewhat. Singer James Cox jumps into the spectators during following track ‘Empyrean’, and the provocation finally inspires pockets of pogoers. In the end, it turns out to be a short set of only seven songs but the London based band have certainly managed to make an impact and look ready for their own tour, which kicks off towards the end of April.

When I last saw IDLES, it was playing Rock City in October and they started the night with a prolonged intro to ‘Colossus’. The sense of rising anticipation worked as an excellent means to ramp up the excitement right from the beginning and I was expecting a similar opening tonight. Yet instead of a teasing build up, IDLES immediately throw themselves into the deep end with ‘Heel/Heal’ and ‘Well Done’, both from Brutalism, and the room explodes into a melee of good-natured wrestling with a ferocity that only comes from sheer dedication. First song of the night from Joy As An Act Of Resistance is ‘I’m Scum’, a mocking take-down on people’s preconception of Talbot and his troupe rendered all the more relevant with the added line “I am a Sleaford Mod”, a nod and a wink to Jason Williamson’s frequent attempts to drag IDLES into an unwanted petty spat.

It’s the first of many spontaneous outbursts throughout the night as Talbot tears down the rise of fascism across Europe, fuelled in the UK by Cameron’s failed gamble that has brought us Brexit, the shambolic attempts by May to bring it about, and the inevitable long term disasters that will hit when it finally comes whilst announcing ‘Great’ and ‘Danny Nedelko’. And it’s exhilarating to see the crowd reaction to such weighty matters, a roar of approval erupting as Talbot parades around the stage shouting “Fuck Tories” as the song starts. The passionate semi-speech seems to egg the audience on more, and the first of many crowd surfers begin to be swept up in the bulging arms of the security.

Wild the night may be, there isn’t quite the level of chaos of some of their previous gigs. Guitarists Mark Bowen and Lee Kierman’s leaps into the audience are limited to specific songs with staff pre-warned beforehand, and any attempt to get on stage or stage dive was swiftly dealt with. But given the number of punters now attending bigger venues, it comes as little surprise that their current gigs would lose some of the spontaneous disorder of their previous smaller shows.

However, don’t think for one moment any of the set is, in any way, stale. The passion in their playing is evident, especially when ‘Colossus’ finally does come, allowing bassist Dev to rattle our bones as Jon Beavis batters the drums. Plus, Talbot expertly takes down good-natured heckling “toerags” and dedicates songs such as ‘Samaritans’ to whichever adoring fan manages to scream loudest, breaking down any sense of ‘us’ and ‘them’ that has come with their growth.

There was a hope that we would hear new material from their as yet untitled third album, which is expected to come out later this year, but this wasn’t to be. Almost as compensation, live favourite ‘Date Night’ was aired for the first time in a long while, and its return was greeted very warmly. It signified the start of the final third of the set during which the biggest belters were brought out, including everyone’s favourite singalong ‘Mother’, ‘Television’, which tackles self-hate perpetrated by the mainstream media, and the irrepressible roll of ‘Never Fight A Man With A Perm’. The imploding clatter of ‘Rottweiler’ and a ramshackle version of Cliff Richard’s ‘Summer Holiday’ finally brought the night to close, the band exiting stage right at the end of yet another triumphant showing.

IDLES are currently on tour in the UK now. For more information, and to purchase tickets, please visit their official website.