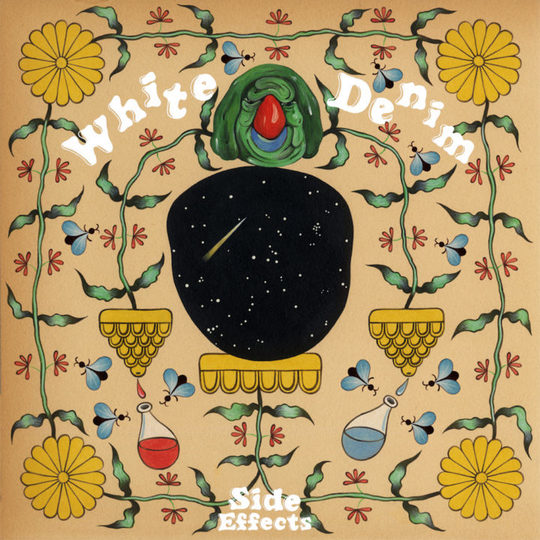 Leading up to latest release Side Effects, Austin rock outfit White Denim posted song clips on Instagram, complete with brief explanations of their origins. Turns out, opener 'small talk (feeling control)' was born in the same session that yielded 'Fine Slime' and 'Good News,' songs from last year’s Performance. Yet thirty seconds into Side Effects opener 'small talk (feeling control)' you can hear the tides of change from their established aesthetic—songs that nod to classic, bluesy rock without succumbing to it. Synth riffs and electric pulses give the song an off-kilter vibe. Lead singer and founding member James Petralli asserts his choice of food (Chinese) while rejecting other suggestions (no Indian or Italian for this guy).

The song is funny – that’s the point, and sets listeners up for an album that does many things at once. Side Effects is playful and experimental while paying tribute to the band’s live shows and their own history. Second track 'Hallelujah Strike Gold' opens with a guitar riff from the 2006 White Denim song 'Paint Silver Gold' (that is, following a cow moo and pig squeal). Third song 'Shanalala' started as a demo following the band’s Corsicana Lemonade tour.

These two songs, along with album centerpiece 'NY Money,' serve as a great synopsis for everything the band has done to date. 'Hallelujah' jumps into a bluesy riff that descends into Petralli singing 'Jeans are bursting at the seams' followed by a squealing sax and guitar squall. ‘Shanalala’ embraces the grittier edge that helped raise the band’s stock a decade ago. 'NY Money' sticks to the White Denim formula—that is, until it jumps into a three-minute, self-contained jam that would satisfy Phish and Grateful Dead fans who may not know of White Denim. 'NY Money,' is a live performance in miniature.

Only at the back-to-back instrumentals 'Out of Doors' and 'Reversed Mirror' does the album lose momentum. Sure, they’re breathers, but given their placement after ‘NY Money’, the several-minute lack of Petralli’s voice may distract. Nevertheless, White Denim has always been a reliable rock band that’s never been short of ideas. ‘Out of Doors’ is twangy tune as bright as a morning sunrise. ‘Reversed Mirror’ is your classic White Denim reminiscent of tunes like ‘At Night In Dreams.’ It’s refreshing to hear how varied their ideas are.

Speaking of new ideas, album closer 'Introduce Me' has a Gary Clark, Jr. edge, an interesting thought given he’s also expanded his sound on this year’s This Land. Punk-inspired 'Head Spinning' is White Denim’s most aggressive track, as if the band were briefly commandeered by The Dismemberment Plan. “So tired of feeling useless” Petralli vents, among other grievances, in true Travis Morrison fashion. The song succeeds because it’s not implausible to hear White Denim adapt this sound in the future.

Much like what Star Wars did for Wilco, Side Effects resets what we should expect from White Denim. This is especially intriguing given the album’s fractured origins, showing the band’s restraint when one song might not be quite right for an upcoming release. Eight albums in, we can still ask ourselves, what new ideas might White Denim have up their sleeve?