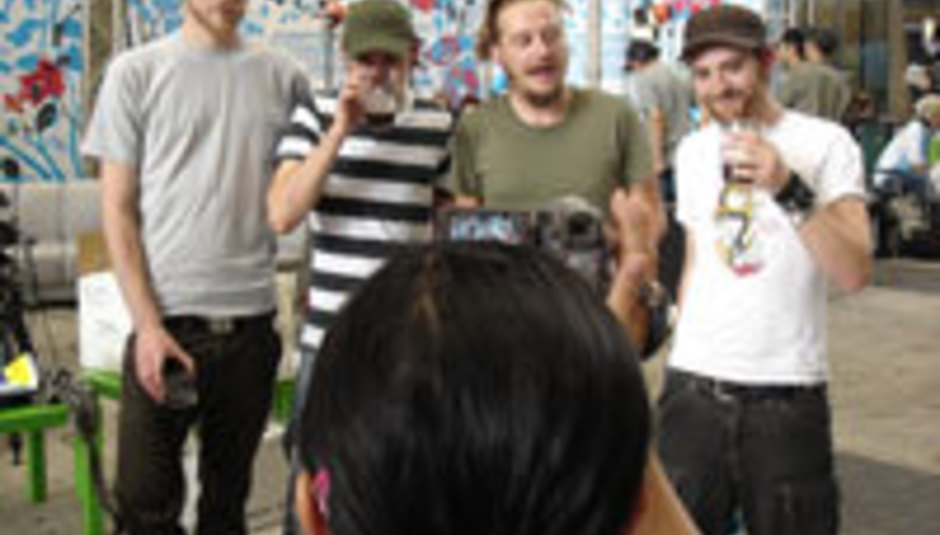 Played to another huge amount of people, and tried to play better. We'd like to think we're a band that's not thought of as being particularly static on stage. When you're playing to that many people, you kind of feel you're really going to have to pull out all the stops to make sure they even realise you're there. Because you feel a bit small. We felt we did ourselves justice. We definitely had to sit down for a bit afterwards.

Then we watched the Deftones. Who were pretty fucking awesome depending on who you ask.

Back in the dressing rooms, we saw Kirk Hammett and Lars Ulrich from Metallica being escorted to separate shuttle buses to go to the main stage, Kirk already naked from the waist up, hair ready-wet, holding a guitar, Lars with an assistant to carry a single set of sticks. They actually had their own private area of backstage, with a 'Booze and Schmooze' room. It was actually called that. Amazing! Paul's friend Carl who lives out here came to the show and we sat in the Rock Rock and Chopstick Tattoo bar and had some White Russians.

That evening we went out again with our record label(s) and tried to conduct a business meeting in Japanese, once again rescued by the Sawaka and the label translator, Sho, who had a fantastic cockney accent when he spoke English. Later we discovered green tea liquor, which goes great with milk, and then left the crew to it, all dressed in Kimonos with a couple of bottles of vodka, to continue the age-old 65 tradition of having a crew more rock 'n' roll than the band. They had light sabre battles with the bright red torches that are in hotel rooms just in case an earthquake ruins your sleep by collapsing the building on top of you. Ozzy didn't get out of bed for 36 hours after that. He is, by his own (slurred) admission, a failed magician. But an excellent tech. And a fantastic drunk. Too crew for you.

65daysofstatic have done most kinds of jobs in their time and it's reassuring to know that the front line of these huge, awful corporations that will ruin everything is always filled with people who don't give a fuck about company loyalty and would leave in a second if anything better came along. They do their job to live their lives and forget about it the second they leave. Tower Records, I'm sure, have killed off countless independent record stores in their time. But that's not the fault of the people who work in their shops. In fact, although these chain shops have central offices that dictate what kind of pop music they will be stocking, when it comes to obscure, leftfield, experimental noisy bands that don't have any singing, each shop is mostly left to its own devices.

The first of our many 'press and promotional duties' was the embarrassing but humbling and strangely nice gesture of visiting various branches of Tower Records in Osaka and thanking the 'buyers' (the people who choose to stock our records) in each shop. Just dudes and dudettes who love music, basically.

There was also a question and answer session later that day, something we'd never done, or expected to do. Ultimately, this ended up with us on four high chairs on a stage in a record shop and 50 or so people who like the band enough to give up their free time to ask us questions, and then get us to sign stuff. Of course, we stepped up to the plate, but it was essentially a brutal lesson in awkward scrutiny.

It went OK though. We think.

The whole rest of the trip was phenomenal, and also an exercise in cramming as much record promotion as possible into four days. We did catch the bullet train, we did stay in Shibuya in central Tokyo, we did go to Harijuku and found a shop called Sexpot Revenge and a shop called Book Off. We did go to Sony Japan to do a dual interview with the Boom Boom Satellites, we did run round a shop called Tokyu Hands that basically stocks every single thing you can possibly imagine, we did eat squid, sushi, sashimi and pickled aubergine that was the colour of the sea, soya beans and shrimp, we did spend the last of our yen winning hundreds of tiny flashing coloured dice for no other discernible reason than that once you'd managed to win a few, you just wanted to keep winning, in an arcade that was so large it had its own virtual racecourse. Paul fell off the coffee wagon during an early morning interview, we got so tired and hot and jetlagged it felt like being on a boat walking down the street. Fell asleep hot every night and woke up cold every morning, because that's some next-level air conditioning they have over there!

We tried to mourn the ever-creeping dogma of commerce turning the world into a well-lit clinical maze of record shops and airport departure lounges, chain bars and advertising, but despite ourselves, we had fun. Despite its problems that echo the problems of a globalised society where those with all the money screw those without it, being in a band is the best job in the world. It's the only job we think we're any good at. We tried at every turn to remind ourselves and others that none of this is possibly going to sustain itself for much longer and that there needs to be another way. We clearly sound whiny and preachy and hypocritical, but we’ll just have to deal with that.

We went for the music, stayed for the inherent contradictions of trying to live sustainably and tour at the same time, then came back the same way we went in: quietly, and without too much fuss.

65daysofstatic are currently putting the finishing touches to their third album, due out at the end of April; the band are on tour in the UK from April 16 – click here for dates.