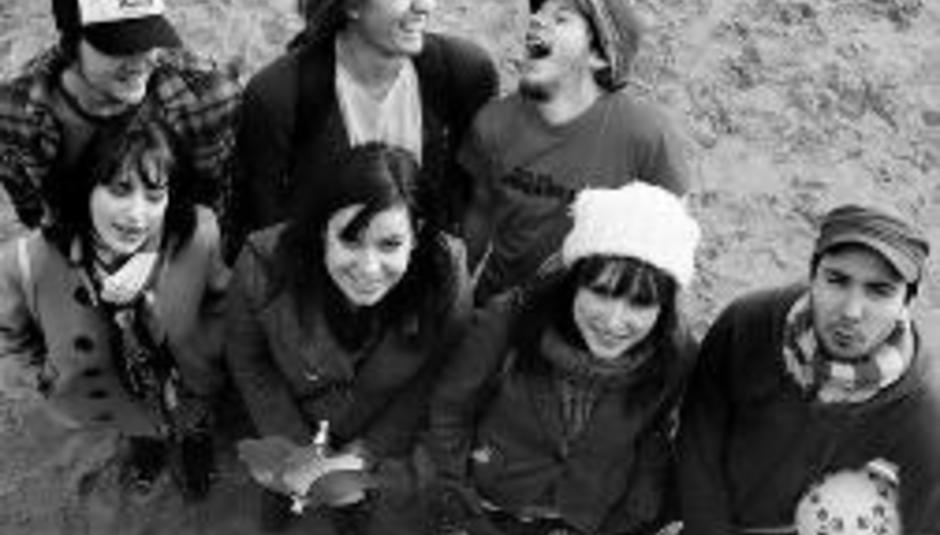 Los Campesinos!: "We have no desire to become the biggest band in the world"

Los Campesinos!: "We have no desire to become the biggest band in the world"

This time last year, the four boys and three girls that make up Los Campesinos! had one common objective, and that was getting through their second year at Cardiff University. Sure they'd formed a band, and had become regulars on the M4 live circuit between Cardiff and Bristol, but any talk of them becoming A&R-land's hottest properties just a few months later would have been laughed off of campus.

Fast-forward twelve months and that is exactly where we are, midway through arguably the most hectic and exciting week of their young lives: their debut single 'We Throw Parties, You Throw Knives' looks set to sell out its (admittedly limited) pressing within seven days of release and the band are embarking on their first nationwide tour.

The stuff usually reserved for fairytales this may be, but almost three hours before the band is due onstage there is already a buzz around the downstairs bar of Nottingham's Social. Knowing glances exchanged amidst a shared feeling that in five years time we'll all be able to say, "I was there".

For Gareth, Aleks, Tom, Harriet, Ollie, Ellen and Neil, it really is a life-changing experience as they devour the free beer, wine and party snacks laid on by their hosts this evening. It’s certainly a million miles away from the hand-to-mouth existence most students normally find themselves in literally months before their finals.

So what do your parents make of all the attention that's been thrust on the band over the past few months?

All: They've been very supportive!

Gareth: I think it should be our decision anyway. I mean, we're all at university so we must be intelligent enough to know what we're letting ourselves in for. We realise the music industry can be a fickle place and it is important we secure our long-term future, which means finishing our degrees at some point.

Aleks: My parents really have been wonderful...

Ollie: ...Well, they know it's like a dream come true for all of us.

Aleks: I think it's my dad's dream!

Tom: My mum's been advertising us to all of her pupils. She's a French teacher so I get a lot of underage Roman Catholic schoolgirls posting on my MySpace page every day!

Did you ever expect things to take off in the way they have?

Harriet: Not at all. We made jokes about it but never expected anything like this to happen.

Tom: I guess it's all down to our mate Simon Cowell! We just let him plan it all, so everything's down to him really!

Gareth: We just wanted to be in a band because it's fun. Singing songs that people like and want to hear is fun. I think our first goal, if you like, was that one day someone would ask us to play a gig in Bristol, so what's happened since has been really surreal and certainly beyond any expectations I could ever have dreamt of.

You've been together for about two years now. When did you decide to start taking the band more seriously?

Gareth: When we became a seven-piece...

Gareth: Even then though it wasn't that serious to begin with. Ellen would book gigs at the student's union on alternative Mondays, and eventually she booked her own band...

Ellen: ...But the thing was that we didn't really have enough songs that were good enough so we literally spent three months practising for this one show in the student's union. I suppose, looking back, it's all been worth it.

Did you start off playing covers while you were still writing and rehearsing your own stuff?

Tom: We used to do a version of 'Float On' by Modest Mouse...

Gareth: ...Well if I'd have been around that wouldn't have happened! I'd never do a cover of a band's most well-known song.

Gareth: ...Or should that be Russian Communist?

What was the first song you all wrote together?

Aleks: That one and two more that made our first demo. One of them was a version of 'We Throw Parties...' with different lyrics.

Gareth: I think that's the whole point of writing a song, though, in that you shouldn't just stop when it's finished. We aim to constantly develop and improve our songs so in a way they're never finished.

So what or who inspired the lyrics to 'We Throw Parties, You Throw Knives'?

Gareth: It's basically a tirade against cooler-than-thou scenesters really. We're not interested in being part of any scene and we don't buy into that notion of everybody being out to impress everyone else. I suppose it's also about the so-called crazy student types. Although we're all students ourselves we don't empathise with the student stereotypes at all.

Tom: It does reference one musician in particular who shall remain nameless.

Does it worry you that people might only see you as being a student band with what is predominantly a student audience?

Tom: Yeah, I think it is something we're aware of.

Gareth: People have just written us off as being just a student band. I do think we have some older fans though...

Gareth: No, we get comments on MySpace from older people who say they like the songs. I do think when people criticise us for being a student band it's just a sign of ignorance on their part because the bands we take our influences from most definitely aren't students. I think because we generally like to have fun and look like we're enjoying ourselves almost offends some people. It's like if you behave in that way then the music must be blasé too. I think it boils down to the fact that if you're calling us a student band as a negative form of criticism then you must have a narrow scope of musical knowledge.

Harriet: It's like saying you have to be a student to appeal to students.

Going back to your influences, with seven people in the band you must have too many between you to mention, so who has the final say on how or what structure a song will end up sounding like?

Gareth: I write the lyrics but the actual sound of the band really is a democracy.

Aleks: There are a lot of artists who we all admire and we all respect each other's opinions when it comes to writing a song, so I think we've been quite fortunate in a way.

Your songs are certainly difficult to pigeonhole into any one specific genre. Was it a deliberate intention to try and cross as many boundaries as possible or did it all just develop naturally?

Tom: We certainly set out not to fall into any pigeonhole, as we've seen so many bands fall into that trap and once a scene or a genre becomes unfashionable the band dies with it.

Gareth: I think from a media point of view it makes life easier for them to say such-and-such a band sound like this or because so-and-so dresses a certain way they can be part of that scene, too. I think when a band has that kind of tunnel vision though it can be very dangerous, as they're ultimately cutting their own lifespan far shorter than it would've been had they not followed a certain path to begin with.

Tom: I guess it really started because we all wanted to do pop songs. If there's any common denominator that links us all I'd probably say Pavement.

Aleks: Once you've got the core ideas for a proper pop song you can do anything with it and take it in whatever direction suits you.

What about the actual arrangements? With seven people all having their own input I can imagine things getting complicated at the best of times.

Tom: I'll write the song and then pass it on to Gareth and then we'll all go into the studio and mess around with it.

Ollie: When we're in the studio we all have a chance to add our own bits or do things a bit differently and run those ideas past the other band members.

Tom: ...Yeah, I mean if me and Gareth go in there with an idea and then we mess around with the song and for whatever reason it ends up sounding better, then that's how the song will progress. Harriet's the real trained musician in the band anyway and if something sounds good to her then we know it must be on it's way.

After last summer's A&R scramble, you finally signed to Wichita. What made you choose that particular label?

Tom: It may sound a bit clichéd but we have artistic control here and everyone at Wichita has been unbelievably supportive. We could have signed to a bigger label and had ridiculous sums of money thrown at us in advance but that wouldn't necessarily have been a good thing, as the levels of expectation would have been unbearable and we would probably have ended up being dropped after one album.

Do the label decide what records you are going to put out or is that down to you?

Aleks: No, we decide that.

Ollie: We thought 'We Throw Parties...' was an obvious first single and the next one will be 'You! Me! Dancing!' in the same formats...

Gareth: And then we're off to record the album.

Tom: Wichita do give us advice about songs and we have taken some of that on board...

Aleks:...but to be fair we tend to respect their opinion purely because they've got good taste in music.

To date you've had pretty much glowing reviews from both the printed and internet-based music press. Do you read much into this and what effect would a negative review have on the band?

Gareth: Well for starters I'd just switch on the TV and read the average review Teletext gave us for the single.

Tom: We don't actually want everyone to like us. It wouldn't make sense.

Aleks: To be honest, whenever we do get negative comments I think we're able to take a step back and try to understand where they're coming from.

Tom: I think as long as we're happy with the songs we're playing, that's all that matters. I mean, if we were playing songs that other people liked but we didn't then what would be the point?