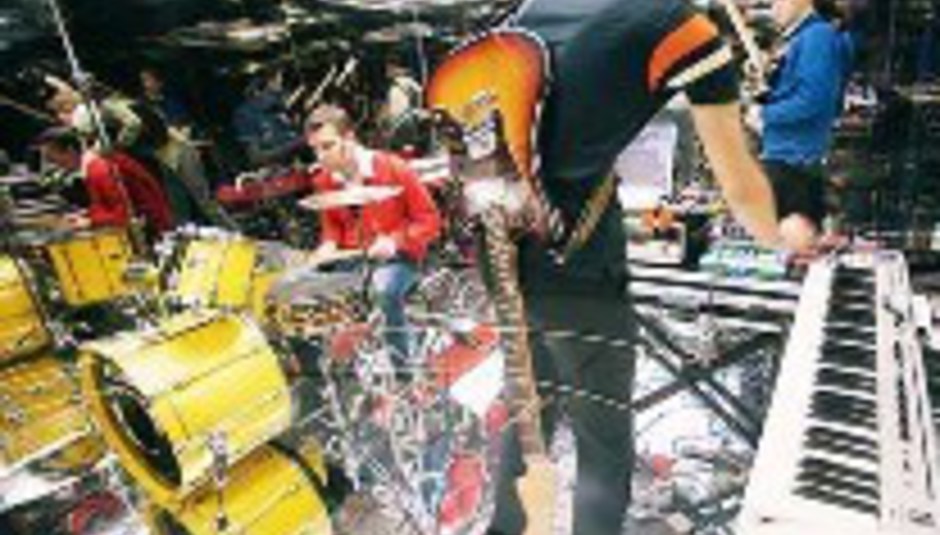 On Monday, NYC quartet Battles release their long-anticipated debut album, Mirrored. Abandon all your ‘super-group’ tags and math-rock pigeonholes: Mirrored is the sound of a super group, and anyone attempting complex mathematics while it’s playing is likely to wind up with their grey matter dribbling out of one ear while the other dances to what’s certain to be one of 2007’s finest albums.

An absolute favourite on the DiS stereo, for months now, the album is the follow-up to EP C/B EP, released through Warp at the beginning of last year. The new LP, also on Warp, is a marked progression from the technically astute but emotionally cold EPs that preceded it; that said, one of its makers doesn’t consider his music to be anything other than neutral.

DiS spoke to Tyondai Braxton – one of four, with t’other three being Ian Williams, John Stanier and Dave Konopka – ahead of the release of Mirrored. The band is on tour later this month – click here for dates, or scroll down… and down… and down.

Hi Tyondai. Mirrored is quite clearly a considerable step forward from the EP material – just how did these complex, but instantaneous, songs come into being?

Honestly, there was no real one way that the songs came together. There were some that we played around with on tour before going into the studio, some of them were half or seventy-five per cent done before we went in to polish them off, and some were created completely in the studio. So there was no one way, and the reason I think that’s good is that having a different approach to each song produces different results. In a lot of cases we had to re-learn the songs after recording them in order to play them live. I think this band isn’t afraid to say, this is us live and this is us in the studio. They’re two separate things. For some pieces, you want to capture what a song sounds like live, and some you want to be completely different, a totally studio experience. And I think that’s a goal, to not have a record be an exact replica of what you do live, and vice versa.

You’ve been playing the new material for a while, and played some new tracks at your show earlier this year at the Ether Festival (review). How has it been going down with the old fans?

It’s great – I think the new material has worked really well. These songs came about when we were a more comfortable band, a more mature band, in a way – the songs on the EPs were cool, but they were also more, like… well, we didn’t know what we were. Now we know what we are more, and it was more fun coming up with these songs and playing around with our sound a little more. You can really hear the individual members of the band – each of the four of us – in pockets on the record, which make it more relaxed in many ways. As manic as the music can be, it’s more relaxed.

** So this record benefited from you spending more time in the studio?**

Absolutely. The final version, you’re not even totally aware of until the record’s mastered. So it’s a nice way to work.

Do you think of Mirrored as something of a work-in-progress still, then? You have been known to alter the EP tracks live…

If you see us live, and we play some of the EP stuff, we manage to totally re-work some sections, and I know we’ll be doing that consistently to these new songs, too. We need to keep things fresh, and keep it fun in a live setting so nobody gets bored. We had more time in the studio on this one – the EPs were done in the middle of the night in a week, and we did all the mixing and tracking in a week, starting at one in the morning ‘til eight or midday sometimes. Those were brutal songs to record – we were getting to know each other at the time, back then, and it was starting to come together but the music was, I feel, very self-conscious in many ways. Maybe that’s just because I know who we were as a band, but now we’ve shed that, and I feel that you hear it in the music. Elements are more subtle.

Mirrored has already received a smattering of good reviews here, although one saw it being compared to both Motörhead and Arcade Fire… what’s your take on that? Seems a little wide of the mark to me!

In a way I kind of like that comparison, because the meaningless of it shows that we can kind of work in a lot of different areas. I’ve heard that we sound like Fela Kuti, I’ve heard that we sound like more abstract bands and hip-hop groups, and it’s great to hear all that because what people are saying is that they hear an element of something and they’re trying to reduce it to something understandable. Here’s what I think: I feel that the way we make music, there’s a neutrality to it. The music is not telling you how to feel, it’s really just reflective of yourself. You can say, ‘oh, I like that part’, because that beat is cool and you happen to be a hip-hop fan… You can interpret the band in any way if you listen hard enough, because the music’s not telling you what style it is. You draw your own conclusions.

Ha ha, yeah… I hope that a band like this won’t be reduced, quickly, by journalists in a way that has negative connotations. There’s not a band that you’ll interview that doesn’t say they’re more than ‘just a rock band’, but having said that I guess there is a danger, as a band member, when you’re aware of everything that goes into creating a certain sound, and all the complexities of it. Personally, I don’t listen to any rock music – I listen to more classical and orchestral music. So when somebody asks me what I think of Arcade Fire, I can say they’re cool, but no more. They have guitars and bass and drums and vocals – I’m not going to pretend it’s an orchestra, and likewise nor are we – but is there a reflection of Arcade Fire in Battles’ music? No, I don’t hear anything like that, at all. So it’s funny to hear these comparisons, and discover what people listen to and what they’re interested in.

Are you looking forward to the May tour, and ATP? It must be your biggest tour in the UK to date, right?

To be able to do the Scala and ATP… we’re very excited to be working like that. I’m going to hang around as long as possible at ATP – Patti Smith is playing, and some other great bands… I would love to. We played a while ago, and Diamanda Galas played… I wanted to meet her but didn’t, but she was really amazing.

*And you’re coming back in the summer, for Field Day? *

We’re coming back, I think… I didn’t know that us playing Field Day (news) was totally confirmed, so that’s cool to know! We are going back in August for festivals, but I can’t tell you exactly what we’re doing. Who else is playing Field Day? (I tell him.) Cool, awesome… looking forward to it.

You preceded Mirrored with a single, ‘Atlas’ (review and video), which was edited for its standalone format – were you comfortable with the edit and did you do it yourselves?

Believe it or not, my M.O. with this band is to have conviction and sculpt a song in the best way you see fit, and so far as edits go, for the video, I don’t mind. I was kind of like, whatever, and in a way I actually like the edited version of it. On one hand I’m very invested in what we do, on the other I try not to bother, sometimes. We did the edit ourselves – all editing and visuals are handled and created by us, or okayed by us.

There’s also a strong aesthetic to the band – there was for the EPs, and there’s a thread to the artwork of Mirrored and ‘Atlas’. I guess this side of the business is important to the band, too?

Yes, and not just packaging wise… I think, what it means to be a band today, the fun isn’t just restricted to the music – you need this whole package and presentation that makes it fun. I like playing with identity with this band, and I think we’re the kind of band that works well doing that. We wanted to abandon the nature of what we did on the EPs and have this cold, mechanical feel to the new music, but at the same time echo themes from our music, like the loops… hence the reflections. We like playing around with that sort of stuff. We’re talking about another single – we’re not totally there just yet.

** What about the possibility of remixes? Mirrored sounds like an LP crying out for a series of awesome remixes, if you get what I mean…**

We’re totally open to that – ‘Atlas’ had a remix on it. Actually, it would be cool to get a whole remix album of Mirrored, that’s a good idea.

And, finally, there’s a real cohesion to the album that perhaps wasn’t there on the EPs – everything is ordered a very specific way, with plenty of thought. It makes for an album that you end up listening to in full, almost by accident.

My favourite records are those where you get a real sense of dynamics – I know there’s something to be said for having every track a banger, every track a single, but to be honest that doesn’t appeal to me. I’m more interested in taking a trip through the world that the artist makes rather than having instant gratification, or a non-dynamic performance.

Catch Battles on tour this month:

Visit them at their official MySpace, here.