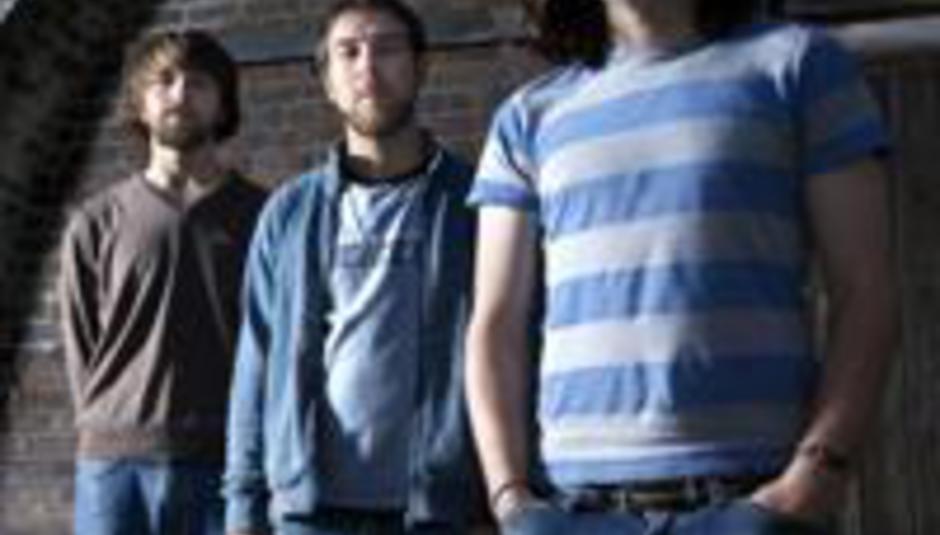 Not to ruin it too much for all those fans of sci-fi series Heroes, but towards the end of the first series a new character is introduced with a strange hybrid Geordie/Welsh accent who by day, works in an office doing administrative work, has a housebound cat named Chicken and hasn’t managed to get a new prescription for his glasses in a decade. Fortunately, by night and at weekends, this Clark Kent figure has spent the past 11 years constructing and delivering flawless albums riddled with seismic shocks of guitar and cut glass lyrics. Unfortunately, the Heroes bit is wishful thinking on our part, but it is strange how former Mclusky and now Future of the Left frontman Andy Falkous has maintained this double life for so long, considering his back catalogue could dismember the current crop of adolescent chancers who take up space in the media and call themselves musicians.

“The thing is, it’s going very well and you’ve got to accept that when you make the kind of music we make, we can’t expect a living,” says Falkous as he bustles through the streets of Newcastle after the first night of their album tour. “Don’t get me wrong, I think we deserve a living but reality is a very different thing.”

With their debut album Curses released this week, the world will once again have to make a judgement on Falkous’ work alongside ex-Jarcrew man Kelson Mathias on bass and former Mclusky drummer, Jack Egglestone. There was a time, during which Egglestone broke his wrist and the band were on the financial backfoot, that it didn’t look like Falkous would be able to get back in the ring, but now with plenty of good reviews, it seems it’s all working out pretty well.

“It’s going absolutely as good as it could in this situation and the reviews are good. I can’t say I’m overexcited,” he says, characteristically deadpan. “For example, eight out of 10 doesn’t mean anything to me. What the fuck is an eight? An eight is perfectly adequate. But we didn’t make a record that was an eight. It was a nine or a three. Seven and eight are the most annoying numbers on the marking scale and I refuse to accept those reviews as a valid discourse on our record. Yesterday in the local Newcastle paper, they missed the decimal point and gave us 45 out of five. It’s almost like a Kevin Keegan mark scheme,” he laughs.

Maybe it’s the acerbity of his lyrics and the thundering aggression of songs such as album opener, ’The Lord Hates a Coward’ where he intones, “Violence solved everything” but Falkous does seem to have an intimidating on stage alter-ego.

“I like to read the reviews, see if there are any personal attacks, get the journalist’s name and if there’s nothing vicious, it’s disappointing. I went to Brussels to do a day of interviews a couple of weeks ago, I know that sounds ridiculous,” he says, embarrassed.

“I was there with Rupert Everett - I wasn’t really – but I had this idea of taking photographs of every journalist who interviewed me just in case I was misquoted,” he howls. “It’s an exceptional talent to be able to put people on edge and because of this ridiculous reputation I have amongst 14 people, it means that people are always expecting an imminent threat. To be honest with you there’s no truth in it whatsoever, but it’s nice to play on it. Nice to have, dare I say, a professional reputation that precedes me. For example, I can be talking about the extensive selection of sandwiches and pastry products in Greggs here in Newcastle and that’s what I’m talking about, it’s not a metaphor, it’s not a veiled threat to Jon Chapple!”

The band have their first European headline tour ahead of them this autumn which isn’t something the three men have done consistently in this guise.

“With the exception of the odd day here or there, it’s a three month tour which is absolutely petrifying and I won’t pretend otherwise,” he says. “The only downsides are not having quite as much privacy as you’d like, especially for a band on our budget. We always have to share rooms - there’s no palatial penthouse suite for us.”

So what is so terrifying about touring?

”Being away from my girlfriend, my flat and my cat. I’m pretty much a homebody at heart. As much as I love my bandmates, there’s the weird snoring and or early morning texting habits. There’s nothing quite like being woken by the little tippy tap of a phone. Sometimes you’d like to interrupt it with a little smashy smash of a hammer.”

The band is anything but Mclusky #2. Curses proves to be a much more taut, direct affair with Mathias adding a jerking menace to the songs as well as vocally bolstering Falkous’ strange exclamations, such as ‘My Gymnastic Past’s “better bovine than equine”. Was there ever any talk of the Jarcrew man contributing lyrics?

“I think the way the band works, everybody knows that I’ll vet and push and prod everything so closely that it’s almost not worth their fucking effort. I think in the whole time in Mclusky, I don’t think Jon, with the exception of ’The All Encompassing Positive’ which is a Bill Hicks paraphrase, came up with one song title. They were all mine. But Kelson came up with ‘My Gymnastic Past’ and ‘Fingers Become Thumbs’.”

Not known for being a sentimental romantic, one song on the album, ‘Small Bones, Small Bodies’ does surprisingly allude to a ‘she’ and Falkous states “with this I miss you, I finally admit that”. Unfortunately, he’s not willing to open up a small crevice in his heart for strangers to see.

“To be honest, the ‘she’ isn’t actually a female woman. I hate literal songwriting, or rather, I can’t do it without sounding ridiculous. Usually when somebody sits down to write a song with something to say they’re sat in their parents shed at the bottom of a four-acre garden wearing a beret, with middle class guilt weighting them down. My lyrics, really, with some exceptions, are just vowel sounds that have ended up forming into vague stories - exercises in language more than anything.”

As underground and college radio stations in America loved and adored Mclusky, it seems only natural to take Future of the Left across the Atlantic. So far, they’ve only made one trip and that for the bemusing circus that is South By South West.

“It was a bit of a queue-fest and frankly when there’s 8.4 million bands playing within a square mile, the quality control goes out of the window. Really, there are only about five good bands in the world so to try and get 40 million of these desperate souls seeking the promised land of a record deal at the same time is quite hideous. So you walk around Austin and pray to Jesus that you happen across a band that isn’t absolutely hideous,” he says frankly.

Were you initially excited about it?

“I thought it would be good for the band,” he sighs, “but excited implies enjoying it and there are some things you have to do. That doesn’t mean you have to dress up as penguins or have sex with giants on flights to Malaysia, but there are certain shows you have to play which are about giving yourself opportunities at a later date rather than having a fantastic time and I would firmly put SXSW in that equation.”

The thought of going to the U.S and having to win over cynical, die-hard Mclusky fans isn’t something that fills him with dread. In fact, it seems Falkous is determined for his old band not to become the proverbial elephant in the room.

“I don’t mind going through it all again. As far as I’m concerned it’s perfectly understandable. From its inception to its unspectacular disintegration, Mclusky was a band for about nine years and it’s as much a part of the fabric of my being as this band. If anything, my efforts and my personality formed a higher percentage of that band than this one, which is probably more of a democracy purely because that’s the way a band works best, if you can get away with it.”

He continues: “In Mclusky, I had to pull more weight and motivate more and dominate because frankly if I hadn’t, there wouldn’t have been a band to lead. But I think it’ll be brought up in America, especially because people love to talk about what is no longer there. It’s far more romantic to talk about this fantastic band that nobody else can see now because they don’t exist anymore.

“When Mclusky Do Dallas came out it was not considered to be a classic. It was considered to be a classic when our next record came out and that next record was only really valued as being a great record when we split up, and I’m sure with this band a similar pattern will evolve just to get on my tits, but people love a good story. People love to attach a narrative to music because, let’s face it, three guys in a room writing songs on the basis of what comes out of the air and shits on them is not quite as exciting as soap opera dramas and falling outs and whatever else constitutes the band’s story,” he says in his typically modest, matter-of-fact way.

“The sad fact is that apart from certain world famous junkie twats, the vast majority of bands are made up of two, three, four or five musicians just trying to make sense out of the awful sounds that come out of their own throats and instruments.”

Future of the Left's debut album Curses was released in the UK yesterday, 24th of September.