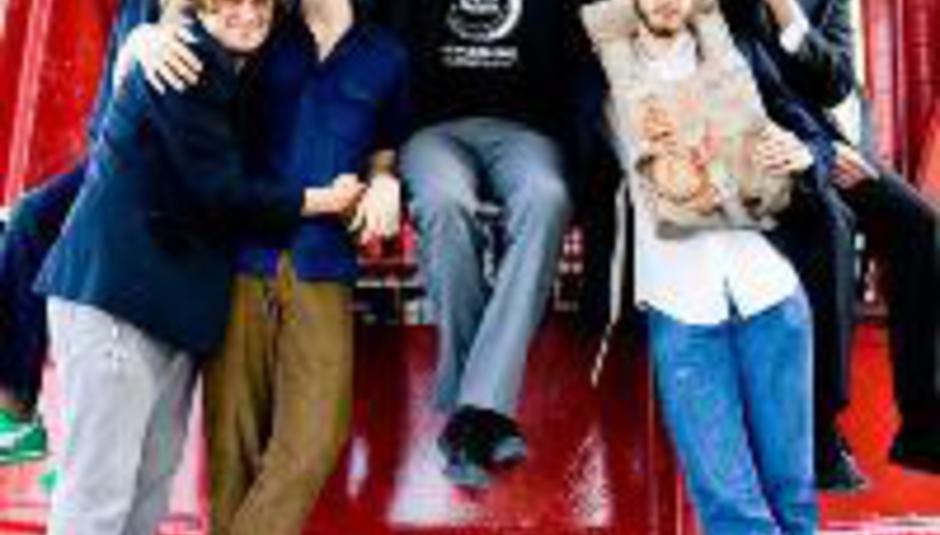 Okkervil River’s music is meant to be grappled with, questioned and reflected upon; never to be taken at face value or with assumptions in tow. Will Sheff, the principle songwriter and main source of inspiration, draws his songs from perpetually living on the road, a place where life is dichotomized; at times it can be serene, saccharine and utterly beautiful, but other moments reveal the darkest of dark, a personification of evil that only shows itself in an itinerant form.

Okkervil River is music for the weary but confident, disorganised but guided soul, that is, anyone with a ear on their mind and eye on their heart. DiS sat down with Sheff, on the eve of their DiS-sponsored UK run to support the critically lauded The Stage Names LP. Have a gander, shall you?

We love to travel here, but you guys make a job of it. You even travelled before forming the band. For example, why did you decide to choose Austin as your musical home, even though you are from the opposite side of the States, i.e. New Hampshire?

Will Sheff: Well, I finished college with the idea that I wanted to scrap everything I’d been working on there and reunite a band I’d formed with my high school friends from New Hampshire. I was living in St. Paul, Minnesota at the time; our drummer was living in Appleton, Wisconsin, and our bassist was living in Austin. Austin had the best music scene so it was easier for two of us to move down to join him than for all three of us to move to some totally unfamiliar place. We moved all to Austin solely because it was the easiest option.

And because it has a better music scene that the other aforementioned? I sense Austin more as a muse than New Hampshire.

Well, Austin has a great scene, no doubt, but I am not sure what you mean when you say you “sense” Austin more in our music than you do New Hampshire. I have noticed that people tend to have more musical associations with Texas than they do with New Hampshire, which hasn’t really produced too many bands. I love Austin – it’s a very laid-back college town – but I’m not sure it’s informed our sound too much. When you look at our contemporaries from Austin – Spoon, Explosions in the Sky, …And You Will Know Us By the Trail of Dead – I don’t think we have a lot in common with them, sonically, or even that they have a lot in common with each other. If anything, I think Austin tends to nurture a kind of eclecticism, more so even than a place like New York, for example, where I’m currently living.

Well, there is a sense of tiredness, a tiredness from too much work as well as a tiredness from too much partying – with which I’ve become very familiar. I wanted to borrow that sense for The Stage Names, because I think there’s something interesting about the way it feels. Travelling does a lot to you, both positively and negatively. Blindly, subconsciously and directly, it is there in these songs.

Definitely. Travelling also makes you appreciate those things in life you live without whilst travelling, well, travelling with no money for example. I say this because I sense a strong dissent towards the manufactured nature of life in your songs; ‘Our Life is Not a Movie or Maybe’, for example, or TV, fakeness, narcissism etc…

Well, agreed to a certain extent, because I think there’s hopefully an ambiguity to how I treat these themes. I don’t hate TV at all, for example – I love watching TV. I also have the understanding that most people who love TV have, in terms of grasping the reality of it all. You know, an understanding of where it falls short, of where it misleads and of the ways in which it can be deeply dissatisfying. I guess a little bit of that dissatisfaction went in to my attempts to write the new stuff, but it is not a direct attack.

As for the word and idea of “fakeness,” I think that is too vague and loaded of a term. How can we be sure if something is genuine? What does “genuine” even mean? If something exists, isn’t that criterion enough for it being genuine? The phrase “dissent against fakeness” sounds somehow adolescent to me. I guess I find it more artistically interesting to engage hard objects and glittery surfaces as if they’re both equally real.

Agreed. So, as for hard subjects, how about anger? Is this an angry record? I feel that there is a sort of depressive anger, one not devoid of hopefulness in anyway but definitely cynical to its discursiveness, mind you?

Well, I don’t think it’s an angry record in the way that our last record, Black Sheep Boy, was angry. That was an angrier, more passionate record in that regard. I think there’s maybe a quality of disillusion or disappointment to it, but I think that quality exists in equal measure to a kind of joy and playfulness.

Is that because you are a more patient songwriter, especially when you're singing ballads?

Well, a ballad unfolds really slowly – there’s a lot more empty space where the words can resonate and hopefully imprint themselves on the listener. I’ve always loved that slow, deliberate quality to ballads, especially soul ballads.

Indeed. But moving on, I am curious about the disorganisation of The Stage Names. I feel like this is the loosest record yet.

It’s funny hearing you mention that, because I often worry that I’m too organised, especially as a songwriter. I worry that I over think things. My favourite art, though, has a kind of sloppy quality to it, a seams-showing aspect to the production and a sense that thematically; a lot of contradictory ideas are clashing and even curdling. I tend to perceive that as a kind of liveliness. I think that increasingly on my records I’ve made an attempt to maintain that kind of lively, human friction, and tat has evolved throughout the records and has shown itself on The Stage Names, especially in a few songs like ‘You Can’t Hold The Hand of a Rock and Roll Man’.

What is story behind that one?

I guess my starting point for that song was to imagine a version of myself six or so years from now, with all my worst qualities amplified to the point of cartoonishness and all my worst nightmares about my career coming true. So then I invented this kind of embittered ex-wife character who’s standing there, yelling at me.

And this leads me perfectly into my next question. I love it when that happens. I do feel, in your music, that you are working through internal problems. Is this intentional?

Not at all. In truth, I’m not a big subscriber to the idea that songwriting should be about “working through internal problems”. By and large, I tend to get annoyed by ‘working through problems’ rock. I feel like songwriting is more interesting when it’s less self-absorbed. The songs are not about me. It’s true that I occasionally use (altered or distorted) elements of my own experience in the songs, but I like to think that I use them as a kind of bait, a worm you’d stab a hook through and toss into the water in an attempt to catch something bigger and more interesting.

Case and point. It is all a self-reflexive exercise, though.

True, but it does not have to be all about oneself.

This is muddy territory.

It need not be. You do not need to be literal all the time.

Well, speaking of literal, why write a song called ‘Title Track’? Is that a metaphor towards commenting on the all-encompassing images musicians usually prescribe onto title tracks, or is it just a form of cynicism peering through?

When I came up with the record title The Stage Names, I somehow had the idea that it would be better if it referred to a title track called 'The Stage Names', so I actually immediately sat down and wrote a song to fill that role. The song was so patently intended to be a 'Title Track' – and everyone in the band kept talking about in and thinking about it in that way. So in the end I just flippantly decided to call it 'Title Track'.

So, keeping on the title theme, did you get into any flak for releasing 'The President's Dead'? It has been, in DiS’s opinion, one of your most popular songs despite its seemingly innocuous release as an Australian tour EP. Did you intend it to become such a staunch anti-war track?

So, we are sponsoring your UK tour.

Well, we have actually toured the UK four times now, stretching back to 2003. I love playing there, but this time it will be different. I am excited to come over with the best version of Okkervil River we’ve ever had.

Does it still feel a new market? You know, playing smaller venues...

As for venues, we’ve played all kinds of venues in the last nine years of our existence – even in the last month! We played in Utah roadhouses with seven-channel mixing boards to gigantic halls with crystal chandeliers hanging over the balconies. By now, we are used to everything.

The whole office is excited. But back to business for a moment, as I forgot to touch on one final element, which is crucial to your sound: the theme of you being a downtrodden soul, personifying your life through your lyrics. What’s your say on that?

A lot of people think of me as a ‘downtrodden soul’, but being thought as a ‘downtrodden soul’ gets old pretty quick. I don’t think of myself that way, and I don’t think my friends think of me that way. So with the songs on The Stage Names, I was trying to fuck with that perception of me a little bit. In terms of the ‘personification’ you’re talking about, though, I do really enjoy the intimacy that a narrator can give a song. For example, Mick Jagger always has these snide little asides and cynical terms of endearment he throws into Stones songs, which I think he probably got from Bob Dylan. I like that kind of sleazy, making-bedroom-eyes-at-the-listener kind of approach to writing. It can add a charge to the songwriting.

It does, trust me.

The Stage Names is out now on Jagjaguwar. Check out Okkervil River on their DiS-sponsored tour, dates as follows: