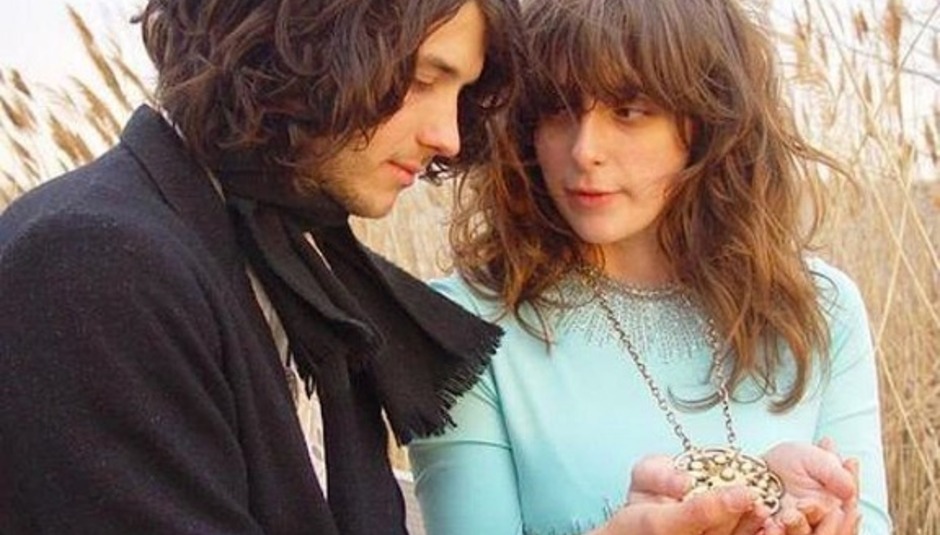 Beach House’s self-titled debut (review) is one of those records that earns your creeping respect over repeated plays, finally lodging itself in your affections with its dappled choruses and poignant slide guitar like a more languid Mazzy Star.

Listening to the Franco-American duo’s music is like deriving pleasure from watching a napping cat curled up by the fireplace, but also feeling sad that you lack the capacity to be as happy as said moggy. We caught up with the band, aka Alex Scally (guitar/keyboards) and Victoria Legrand (vocals/keyboard), to talk about their slow-burning debut, family connections and a little-known, nascent musical genre by the name of ‘flaccid acid’…

Victoria, I read some place that you couldn't switch your keyboard on at your first ever European gig at the Social in London. That must have been pretty horrible, no?

I suppose there'll be comparisons drawn with The Cocteau Twins with your record being released through Bella Union in Europe. Do you see the comparisons yourself? Does Bella feel like a natural home for your music?

Yes, but no comparisons to Cocteau Twins yet. I personally don't hear the ostentatious similarity with our music and the Cocteau Twins. Although they are a cool band, fo’ sho’.

Your music always invites seasonal analogies, particularly about its wistful, autumnal qualities. Do you think you're quite nostalgic as people? What's your favourite season and why?

I think we are both musical people and we play what feels right, our favourite season is fall ‘cause it’s the best. But it was perfectly coincidental that it came out so nicely with the season, at least in America. I get bad allergies in the fall and summer. Sucks.

It seems your music and lyrics are quite impressionistic and tend to invite a very personal response. Have people ever told you your music makes them think of something weird or unexpected?

One time a girl who interviewed us said she took her top off to our music. And once we signed someone’s weed-infested pill bottle. Most people fall asleep to it, yay.

Victoria, what does your uncle (legendary French composer Michel Legrand) think about your music? Has he encouraged or advised you much in your chosen career? I think you'd do a mean cover of ‘Windmills Of Your Mind’, what do you think? What does a classical training teach you about being a singer in a rock band?

I haven't seen my uncle since I was a wee little girl, I can barely remember. I suppose I got the genes on the Legrand side of the family, the artists. It would be nice to see him again, but I'm not sure that will ever happen. If anything, my uncle has influenced me in the fact that you can make music your life and be prolific if you really want. And do many things with it, like film for example. ‘Windmills...’ is a really awesome song, holy moly. Classical training has taught me that's it's really easy to lose your voice in a rock band, but to have stamina is to care for your voice in some very important and subtle ways, like not being a heavy smoker, and not boozing and screaming all the time. It’s easy to scream and sound like shit, it's just not easy to do like a death metal scream. That I haven't figured out yet.

Pearls are an image that seem to recur in images and press shots surrounding the band – do they have any special signification for you?

Textures, visuals - those images are just one of our immediate reactions to our own sounds. All music is visual, at least when it works. Pearls and gold equals millions and billions. Psike!

Your album is very unified in terms of atmosphere and sense of 'adriftness' – do you think on future releases you might try and vary the tone a little more?

Yes, we are always changing, we not sure exactly how, but the new record does not share that unified ‘adriftiness’. We may or may not be drifting away from adriftness.

How far along in the recording progress are you with the second album? Is there a coherent sound beginning to emerge from the sessions?

We pray there is a coherent sound. We are done with the recording, and we’ve completed the record.

You mention on your MySpace page (here) that you hate genres and in particular the word 'folktronica'. I agree that is a horrible word but perhaps I could suggest a few alternative names and you tell me what you think? Soporifolk? Slumber pop? Dew gaze? Actually they're quite rubbish, any suggestions of your own?

How about cheesebreeze? Or buttmania? Or flaccid acid? How about fern talk? Folktronica is just a dork word. But then again, we're dorks, so we fully embrace whatever you throw at us. I think it's possible to straddle genres with each new record an artist makes. Genre is cute and makes things neat, but as artists evolve, the question to the artist as to what genre they are I believe becomes less and less relevant somehow, I dunno.

Beach House’s self-titled debut album is out now on Bella Union. The pair tour the UK, dates as follows: