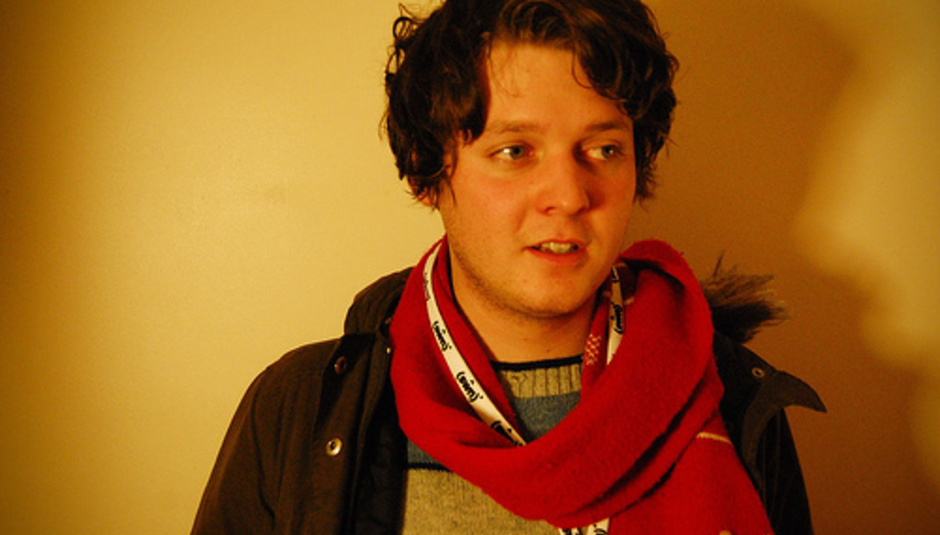 Beirut: inspiration is an old piano (Archive Interview from 2007)

Beirut: inspiration is an old piano (Archive Interview from 2007)

“Here we are in Cardiff and a there’s a British band playing western music. American country music.”

The words are said good-naturedly and with a twinkle in* Zach Condon*’s eyes, but there’s a clear point being made, perhaps by a frustrated and slightly defensive man.

We’re in the reverential setting of The Point in Cardiff, a converted church that is tonight hosting Condon’s Beirut as part of the first evening’s festivities of the inaugural SWN Festival. The band soundchecking downstairs that Condon is referring to is that of Richard James. Does he want me to admonish them for appropriating another culture’s music? “Yeah,” he replies.

Zach Condon is a funny man. In both respects. He’s wry and mischievous, yet he seems quite out of place. You’re unlikely to meet many boys – and he really is a boy – quite like him.

Having set the bar for Balkan-influenced indie rock last year with Gulag Orkestar, 2007 has seen the release of The Flying Club Cup, a set of songs that reminisce more of World War II-era France than anything found beyond Zagreb’s borders. It’s a contradictory affair for some, frustrating moreover for those wishing to pigeonhole the 21-year-old as a lover of all things gulag. Those who are aware, though, that he recorded an entire doo-wop record at the age of 16, may be less surprised by his current shimmy away from what’s expected of him. In wider circles, at least.

--- I was playing this old piano. None of the black keys worked except F sharp, so you had to write in the same key ---

The contradictory nature of Condon is revealed when he dispels the easily-held notion that The Flying Club Cup was recorded, or at least directly influenced by the time he spent, in France. “I actually recorded 80 per cent of it in Mexico – in Albuquerque – then I went up to Quebec to Arcade Fire’s studio. I moved to France after the album was done.”

“I always do it backwards,” he continues. “Before I make the records I listen to stuff [that influences me], that’s how it works. It’s all a crap-shoot actually.” This is said in the knowing tones of a man who very rarely misses, crap-shoot or not.

“After Gulag I went back to New Mexico with nothing in mind, no clue what to do or what kind of songs, but [the songs on The Flying Club Cup] came in the first few notes, playing this old piano. None of the black keys worked except F sharp, so you had to write in the same key, but the first couple of notes came through that, and it reminded me of something, but I didn’t know what. And then I realised.” And it was? “A Jacques Brel song, ‘La Valse a Mille Temps’ – ‘The Waltz A Thousand Times As Fast’,” he translates for me.

So, can we expect this to be the last of the Parisian-themed records for a while? Is the challenge to keep extricating new sounds to play and record with? “To an extent – it’s actually one of the few ways I can keep myself inspired to write the melodies.”

The melodies. It’s a theme that Condon returns to a number of times, and admits that it’s his driving force, and most definitely an obsession. Each time he does, his eyes widen slightly and his voiced takes on a tone of great sincerity.

“I used to write a song a day when I was younger, when I was excited and just getting started recording. It was almost an addiction to melody or something. If I didn’t have a new melody to listen to before I went to sleep, I wouldn’t sleep that night, couldn’t be happy.”

That sounds rather obsessive-compulsive. “Super OCD,” he happily admits. “That sounds kinda nuts, actually… Yeah, I’m not totally crazy, I’m kinda alright.” Going back to the notion of being forever castigated for taking other people’s sounds, it’s case of always being… “Comparisons,” he interjects. “It doesn’t bother me. It’s exactly what I want people to do with my music. If there’s a label on it, it doesn’t bother me. Obviously I’m not trying to just disappear into other people’s sound. My melodies will always be my thumbprints. I can’t change that. They’ll always kinda sound… Beirut-ish.” With that, he giggles.

But you’re always going to happy to try out new sounds? Look at other cultures and musical styles? “It’s not really the rule of the game, so to speak. The idea is that it could be like throwing the darts at a world map or something. But, it’s something the press pick up and take for a ride,” he says, airily.

“With Gulag Orkestar, it took me a long time to accept that album for what it was – I was shooting for the stars and fell pretty short. And it will always be that way. I almost threw that album out actually, threw it back into the closet. And kept working, but it kept popping up.”

“But,” he continues, referring to the post-album making process, “all this follows. Even the interviews started to take a certain shape afterwards that wasn’t intended - do you know what I mean? The French thing (on The Flying Club Cup) was actually an afterthought. The label was asking, ‘What can you give ‘em (the press)? What can you give em?’ I jokingly said, ‘Oh, it’s about small towns in France.’ ‘Every song?’ ‘Yeah, put that down’.”

The problem is, I offer, that after you make it and put it out, it’s no longer your own record. “I would totally agree with that. It’s funny. All the writing I do is totally for myself. It’s such an isolated thing, actually. I left New York (where he was based for a few years) for a reason: to get away from music, the audiences, everything.”

By modern standards, you’re quite a prolific artist. Are you happy with the traditional system of working, writing, recording and then touring? “Yeah, I’m pretty happy with it, although I have to shake it up. I have to. I’m thinking about recording with different bands. Strange collaborations… it needs to be shaken up to keep it interesting.” Define ‘strange collaboration’. “Strange for me. I was thinking of going back to Albuquerque and hiring a mariachi band for a song or something like that. Something quite unexpected, quite foreign to me. I also might be going to record in Macedonia.”

I feel like I need to do certain things before I hit, say, 25, and then after that it’s a blank page ---

You’re a busy boy. “My manager's saying, ‘It’s okay, take a break, it’s not going to disappear’. But I feel like I need to do certain things before I hit, say, 25, and then after that it’s a blank page.” But, I suggest, you’ll then say ‘I need to get things done before I hit 30’. “Mostly, yeah, that’s kinda the way that the Condons work. The family lineage is compulsive.” Returning to the conundrum of touring, he then admits, “I wasn’t built for it and it’s brand new to me. I guess there’s only one hour a day that I actually enjoy.”

It’s impossible not to ask what lies ahead in the future, what plans this occasionally shockingly confident young man has in store. “I’m going to make a house record. Take on German music,” he replies with that mischievousness back in his eyes. He makes it quite clear that this is a joke and something decided on the spot. And, in the short term, you would suggest it’s rather unlikely. You do, however, choose not to dismiss it out of hand…

Beirut’s The Flying Club Cup is out now via 4AD and is one of DiS’s 50 albums of the year – you can get involved with our readers vote by clicking here. You might even win yourself a pile of albums.