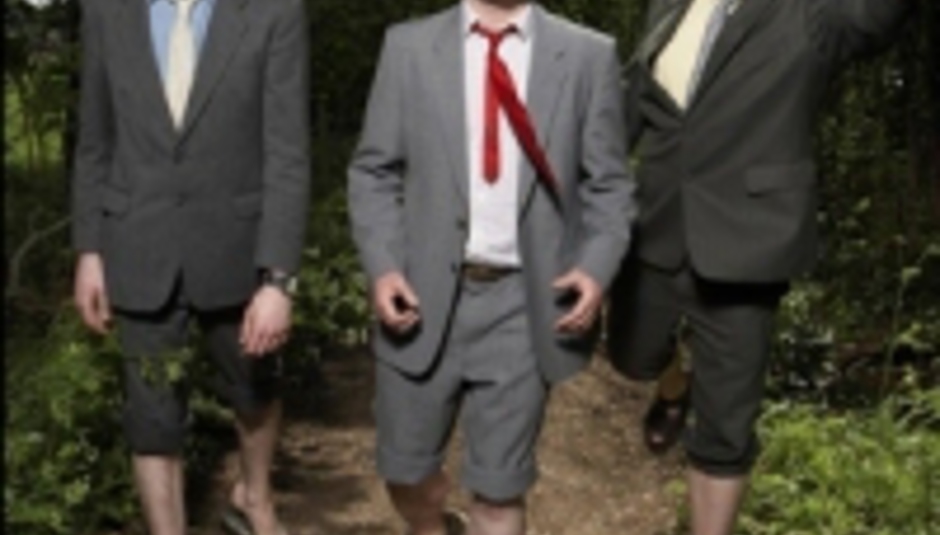 Young Knives are a tight-knit trio, strong enough to broach any topic that’s offered, compact and close, squawking like a clamour of rooks and not to be grappled with. Tonight they’re roosting in the dressing rooms at London’s doomed Astoria, up at the highest point of the building, through a backstage of steep, winding corridors.

Rescheduled from the original meeting after the band’s van blew a tyre on the M40, Henry Dartnall, House of Lords and Oliver Askew talk on the dangers of eternal geekdom and caricature, their post-post-punk cohorts from 2003, hipsters and a pop mob swamped by mundanity.

And, then there are the already-published opinions on NME and the readers of DrownedinSound.

All the coverage I’ve ever seen of your band has made a big deal of the geek thing and the tweed. Do you think there’s any danger of becoming a caricature?

Henry Dartnall: Yeah. The trouble is we could try not to do it, but then we end up looking like a bunch of geeks. The problem is we never decided that we would be geeks and wear tweed. It’s just what happens when you sign up with a record company. Somebody in the marketing department goes ‘right, how are we going to sell that?’.

HD: Oh no, we’re dressing how we kind’ve dressed, it wasn’t like, ‘let’s make this a big part of what we do’.

House of Lords: I got told off for wearing a pair of jeans once. They said I was dressed like a teenager and that I’d let them down.

Like when your parents tell you they’re not angry, they’re just disappointed?

Oliver Askew: Except fat! [this will be Oliver’s sole interjection]

HoL: The guy can never shave his beard off. It has to be kept for as long as his music career lasts.

HD: We kind’ve went along with it [the tweed angle] originally because we could get some snappy suits out of it, but then we thought ‘oh fuck it, I’ll have to keep on buying loads of clothes’. And that’s not really my bag. You just wear what you put on don’t you?

Yeah I guess so. As long as it doesn’t get to the point where you’re walking in the street and feeling uncomfortable.

HD: Exactly. What am I gonna do, wear brogues all the time? Sometimes I just want to put a pair of slips on. Training pumps. It’s fine. 'Geek''s like one of those things that people will probably call us from now ‘til eternity.

It’s even on your Wikipedia page. Presumably you don’t update that yourself.

HD: Yeah, there’s a link also to tell you what geek rock is, I looked at it the other day.

HoL: Who else is in geek rock?

HD: They call Foals geeks now as well don’t they. ‘Cause of what they do. Barenaked Ladies are listed as geeks. Eels were geeks.

HoL: They had glasses.

HD: On Wikipedia they had a thing that said what geek rock was and it said ‘it’s notable by the people who do it wearing slightly nerdy clothes and glasses and playing stabby guitar parts and polyrhythms’.

Talking of stabby guitar parts - I’ve seen you state elsewhere that you wanted to get away from the Gang of Four-style stuff you’ve been releasing on the new record.

How did you want the new record to be different from the first?

HD: We wanted it to be – because a lot of people have done very kitchen sink English or British music, where lyrically it’s very much all about…

HD: Yeah, it’s boring isn’t it? I think that people thought that’s what we did and we wanted it to be a bit more magical. Slightly more open to interpretation lyrically, a bit more crazy…

Any sense of the mundane has always been quite skewed with you, at least. On the old album there weren’t very many straight-up, ‘oh I went out, nutted someone…’ The amount of people who’ve made money from rhyming the word ‘fight’ with ‘night’…

HD: …people writing songs about having 9-5 jobs. People doing songs about girls you fancy or chance encounters at discos. I’m always amused when I hear songs like that. Like The Rakes. Why does he write a song about that, fancying girls? Apart from that he probably fancies girls, but it’s obvious. It’s like saying ‘the countryside is beautiful, trees are nice’. Why don’t you write a song about that? He hasn’t got anything to say.

So what does ‘fake rabbit, real snake’ mean?

It means that the things that are fluffy and nice aren’t real and the things that have a bite in the arse… a bite in the arse?! A sting in the tail, are real. There you go it’s a metaphor. Like when you look through rose-tinted glasses and you make up truths about stuff or you take loads of drugs and you think ‘I’m brilliant’. ‘I’m great, look at me’, and it’s horrible at the end.

HD: That just means down to earth. It’s more of a statement.

HD: That’s like soon, you’ll have to keep your feet on the ground. It was more kind of open-minded when we started. We’ve had it for ages but before it was a really fey folk-y song, with arpeggios and a ‘fake rabbit, real snake’ Robert Wyatt type-thing.

NH: Then we made it into a rock song!

HD: Then we listened to Foals and thought let’s write a nu-rave song.

[conversation drifts onto Franz Ferdinand's Alex Kapranos, (“He doesn’t want to be in a band, he just wants to write for the Guardian. I hate all that renaissance man stuff. It’s so aspirational.”) and then The Gossip's Beth Ditto, who also contributes to the Guardian, and her band's live album. Then, for whatever reason, the subject of 'cynicism' arises.]

HoL: If you look at our reviews they’re not bad, but some of the things the readers say… I take things quite personally sometimes and I go on there it just goes 'mediocre, mediocre, fucking shittest band I’ve ever seen', you just go ‘fuck it, I’m not gonna go on here again’, but I keep going back to it.

Do you have a message for the readers of DrownedinSound?

HD: At least they hate us, I just don’t like the idea that we’re mediocre, that’d be awful. I’ll take ‘I hate this, this is the worst thing I’ve ever heard’ or ‘I love this’, but to get six out of ten, that kind of reaction… probably what that shit pop music paper will give us for our album.

But isn’t this an NME show?

HD: Yeah! And they’ll be making money off us… Oh god, it makes me sick, the music business. You use them and let them refuse you… (under his breath) gaylords. I can’t say that can I?

HoL: ‘Henry – homophobe from the Young Knives uses the word gay to mean bad’. Which, frankly, is not very left-wing or forward-thinking.

Anyway, on that bombshell... There are a couple of tracks on the record attacking the hipster community. Do you mind if I ask about this?

HD: Yeah, fire away, ask about anything you want and I’ll answer candidly.

OK, if you had a five-point guide to spotting a hipster… hipster trash.

HD: Oh come on it wasn’t supposed to be that much of a big go at people…

There was the video…

HD: Yeah, that was a video director’s interpretation of our group. And we did say ‘we don’t want it just to be us kicking in a load of trendies’. And that’s what it became, that’s what it was. It’s a bit cynical, but you know, it’s a bit of fun isn’t it.

HD: But we all do it. We all stay up all night. And saying ‘everybody looks famous’, saying ‘everyone looks amazingly glamorous all the time’, that’s not a bad thing. The character in the song is going ‘what’s the point in me coming here and making all the effort when everything I do falls by the wayside ‘cause everyone here looks fucking amazing?’. It’s not just a song about how everyone in Shoreditch is a cunt. ‘Cause it’s not true – not everybody is.

HoL: It’s why 'Nathan Barley' was so popular I think, ‘cause some of the people that were supposed to be idiots were quite nice and kind-hearted. So it was actually quite human – there were no goodies and baddies in it. I liked it.

So nothing completely against hipsters?

HD: I’d love to be really trendy. I like people who have stupid haircuts and stuff ‘cause otherwise the world’d be a boring place.

Young Knives' (Myspace) Superabundance LP is out now on Transgressive. The geek-rockers (only joking, lads) are currently out on tour in the UK. Catch them at one of the following dates: