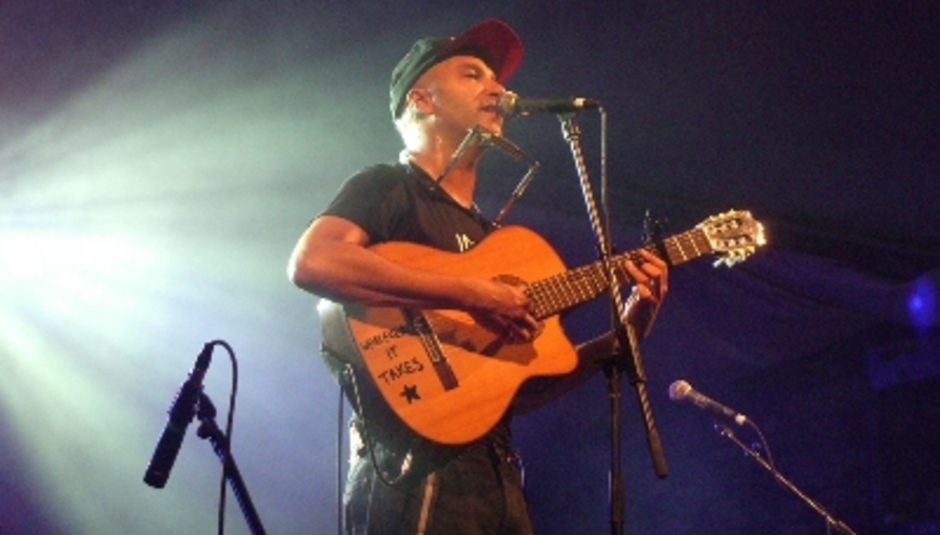 South By Southwest 2008: the DiSummary

South By Southwest 2008: the DiSummary

Drum clacks pebbledash the air. Riffs purr down every alley. Singers fight for your attention on bar stools and while crawling across speaker stacks. Nothing but the aroma of BBQ sauce fills the sunburnt nostrils of Radio 1 DJs spotted rushing from one bar to the next. It must be that time of year again…

South By Southwest (SXSW) is an annual music-festival-cum-conference like no other. This pick 'n' mix festival is to the indie-music world what Sundance/Cannes is to cinema. For four dizzying days a year SXSW takes over the self-proclaimed_ "live music capital of the world" _(Austin, Texas). It's a festival like no other, where, despite playing host to some of the biggest names in recent music history (this year's big guns include Van Morrison, The Lemonheads, Motorhead and REM), it's renowned as the place for breaking new music - previous years have seen the likes of Clap Your Hands Say Yeah, Gallows, Foals and Be Your Own PET begin to highlight their names as ones to watch.

Anywhere a PA can be erected - car parks, churches, pizza restaurants, backyards of bars used in The Texas Chainsaw Massacre - the assembled laminate-wearing music industry movers, shakers and wannabes pitch up to catch the festival's 2,000-plus new acts. There's music from everywhere in every genre and style, ranging from metal, country, and hip-hop, to unique shows, like an intense Anti-War super group called BODY OF WAR featuring members of System of a Down, Rage Against the Machine (Tom Morello pictured) and Juno-soundtracker Kimya Dawson of the Moldy Peaches or there’s the less stage-filling acts like THE BLOW - who's a girl from Portland, Oregon playing her disco odes to Beyoncé with a super-sweet charm and her live show is both hilarious and fascinating. However, this SXSW seems like it'll be the year of Canadian rave-punks CRYSTAL CASTLES whose teasingly short live show at Emo's saw queues of 500-plus people left outside as their 8-bit Game Boy sounds muddled with Daft Punk-inspired dance-antics and screamo tongue-like vocals, proving that their forthcoming album will be much more than a-record-by-that-band-who-were-on-Skins and more like a new generation’s Sonic Youth.

A handful of other acts made their mark, including the haunting* BON IVER* (just signed to 4AD, and his album’s really special). Swedish pop-blog princess LYKKE LI sounded like she'll be all over radio playlists and festival bills this summer; Björk's tip for 2008, SANTOGOLD, whose Karen O-styled, genre-crossing mixture of M.I.A. and Kelis and her exhilarating live show involved some brilliant military-robotic dancers. Plus everyone was talking about art-punk bands like TIMES NEW VIKING,* THE MAE SHI* (soon to be on a DiS tour - dates), and particularly LA's finest NO AGE: their no less than 14 gigs at SXSW involved the twosome climbing speaker stacks and playing guitar from atop crowd members' shoulders and rumours of people falling off a precarious bridge during one of their more bizarre shows.

Meanwhile, Brits like DUFFY, THE PIGEON DETECTIVES and JOE LEAN & THE JING JANG JONG were a major disappointments, especially Joe Lean’s sub-Razorlight Britpop clatter, which failed to gain much of a reaction from even the most enthusiastic anglophiles. Conversely, Emo-pop sweeties I WAS A CUB SCOUT dived in fountains and told everyone they met how amazing PARAMORE and BE YOUR OWN PET were, before discovering their synths had been half-inched.

And the rest, in annoying Facebook-status style:

WHITE DENIM is like MC5 taking over Sesame Street and sticking a feedback-riddled guitar down the cookie monster's throat. Think a hipster QotSA swarming in static like spay painted crows.

ANTHALLO is used to be an emo band; now they make Broken Social Scene seem overblown, as they bash, soothe and tease like a Chicagoan Stars.

THESE NEW PURITANS is the quintessential English indie (too smart for their own good, too dour to be from anywhere but drizzle kingdom). The Tom Paulin to Arctic Monkeys’ Stephen Fry.

OX.EAGLE.LION.MAN. is as outta context as a band can be, dressed in black Jewish-Christian regalia on the roof atop some air-con'd place called Wave, playing their post-My Chemical Romance sprawling gothed-pop at an_ NME_ party.

JENS LEKMAN is a very nice Swedish man. Playing on his own he sounded like Jonathan Richman at a Rufus Wainwright tribute night.

EL GUINCHO is being talked about by hipsters and people who’ve bought into this whole Afrobeat not being some Paul Simon tribute nonsense. Despite just being one guy on stage with decks and clever bits of kit, he’s fun live, which endears him to the world a little more.

WHITE WILLIAMS is what Brian Wilson would be uploading to MySpace if Afrobeat was the new surf rock rather than some ridiculous scenester crush or fake media bowel movement, based on non-Pavement/Fugazi/Screwdriver influences.

GEORGIE JAMES is super pretty, doing lush little weezer-lite ditties from a pretty and a guy who used to be in seminal party-punkers Q and not U.

YACHT is the music part of The Blow and live he’s a one-man sampler pincher and Peaches lyncher, with enough rhythm to lift the Glastonbury dance-tent off of the ground.

M. WARD is playing a church but DiS is left outside with 500 other people hoping to get in.

And there was oh-so-much more…

South By Southwest in photos HERE.