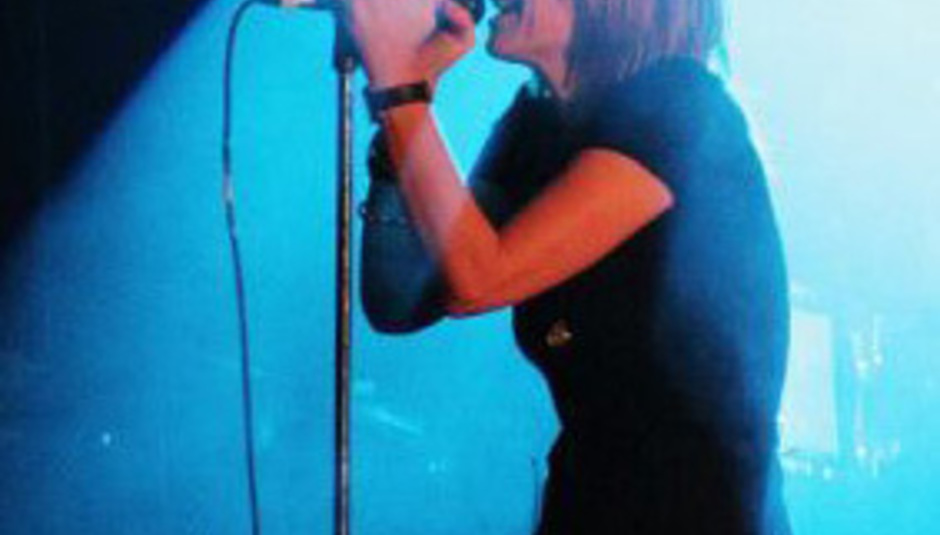 DiS toddled off to Berlin the other day (March 19) to catch Portishead - Geoff Barrow, Adrian Utley and Beth Gibbons (pictured at ATP 2007) - record a special session for German radio station Radio Eins, watched by a small crowd of competition winners and industry types. The nine-song set focused almost entirely on the band’s new album, Third, which DiS was able to hear for the first time on the flight out – our first-impression notes are below for your perusal.

Given to DiS on a special personalised iPod – no physical copies were distributed to journalists on the Berlin junket – Third _sounded pretty special at 38,000 feet; in the Funkhaus Nalepastrasse, which previously housed the GDR’s primary radio station, eight of the album’s eleven tracks were performed live, with a couple of end-of-set retakes ensuring the tiniest mistakes (member Barrow commented that it’d “been a long time_”) were tidied up ahead of the session’s broadcast. Tracks played, as follows: Third’s opener recalls the brooding intensity of their self-titled initially, but soon the dramatically incessant percussion takes hold of the toes and you’re there, alongside Portishead 3.0 and their familiar-yet-alien eeriness. Beth Gibbons’ vocals are, really, the only element of this song binding it to previous output, as the music seems more muscular than the trio’s ever has before. The song’s climax is abrupt, to say the least.

The pace is slowed, and a guitar’s gently plucked at between Gibbon’s ever-haunting tones. This calmness is shattered, though, by Utley throttling a truly pant-shitting wail out of his guitar after about a minute; a sign, perhaps, of Barrow’s fondness for bands like OM and Earth (he wears an Earth t-shirt in Berlin) and their influence on this third album. It’s certainly already more ‘rock’ than either of its studio predecessors.

Slightly oriental-sounding percussion – you’ll know what we mean when you hear it – opens this song before layers are added and the piece clip-clops its way to an early finish. At 3.19 long, this is one of the album’s shortest songs, and one of its least attention-grabbing first time around, despite being dominated by the (quite lovesick) vocals above all other constituent pieces.

Acoustic guitar! You can hear every slide of finger on string on fret, like its being played in the same room you’re experiencing it in. (DiS is on a plane of course, so there wouldn’t be space, but you get what we’re saying right?) With two minutes to go things take an enjoyably keyboard-led turn, recalling Kling Klang and all things Kosmische. Wait, where are we flying to again?

Something about the pace of this track’s percussion is very Dummy; it’s certainly the closest cousin yet of any track sourced from Portishead’s Mercury-winning debut. Gibbons’ voice is flush with drama, and the arrangement buzzes in and out of discordance to dizzying effect.

Immediate love, 19 seconds in, when an organ’s sparked into life, squeezing out notes that chill the blood. This is what Portishead do best – music that’s instantly engaging but also unsettling, quite unlike anything deemed to be part of a zeitgeist contemporary or retrospective. Yes, they were bracketed ‘trip-hop’ back when, but Third is, by this point, revealing itself to be an album unlikely to end up on too many coffee tables.

A pretty acoustic filler track, really. Interrupts the flow rather. But no doubt there’s method behind its placing between two of Third’s strongest tracks.

The bold first single – a blitz of mechanical percussion and drifting vocals pleading for a saviour. Witnessed live by this writer a couple of times now, it’s certain to become a fan favourite, even if it is by far the most visceral-sounding standalone offering the band will ever issue. The song’s available on one-sided 12” on April 14.

Another slow start guided by merely an acoustic guitar and Gibbon’s most-excellent vocals; it’s a little Bat For Lashes, actually. A cello – we think it’s a cello – fleshes out the piece before things go all ‘The Rip’ via The Doors’ psychedelic flourishes. It’s a funeral march pace-wise, but no less dramatic for its reasonably laboured shuffle.

Slightly skronked brass overpowers a delicate piano motif, opening the floodgates for everything to get that bit louder. We can’t be sure, but that might be an accordion in the background… or at least something that’s filling the gaps between each spare drum beat with noise that can only be squeezed from its maker, not strummed or beaten. Probably just one of their fancy organs.

Third’s closer is one of few here to instantly recall past recordings – it’s the speed of delivery rather than any arrangement similarities, though, that has one rummaging for the self-titled album come the ultimate climax here. Meaty guitar meddles with skittered beats and a background drone that threatens to swallow the entire piece; when the end comes, it’s ugly, all lost ships at sea trumpets and echoed malevolence.

The verdict: will be yours to read when we review Third around the time of its release, on April 28 (via Island). Until then, ‘Machine Gun’ can be downloaded now, ahead of its physical release, here. Also: click to DiS next week (week beginning March 24) for an exclusive interview with Portishead's Geoff Barrow.