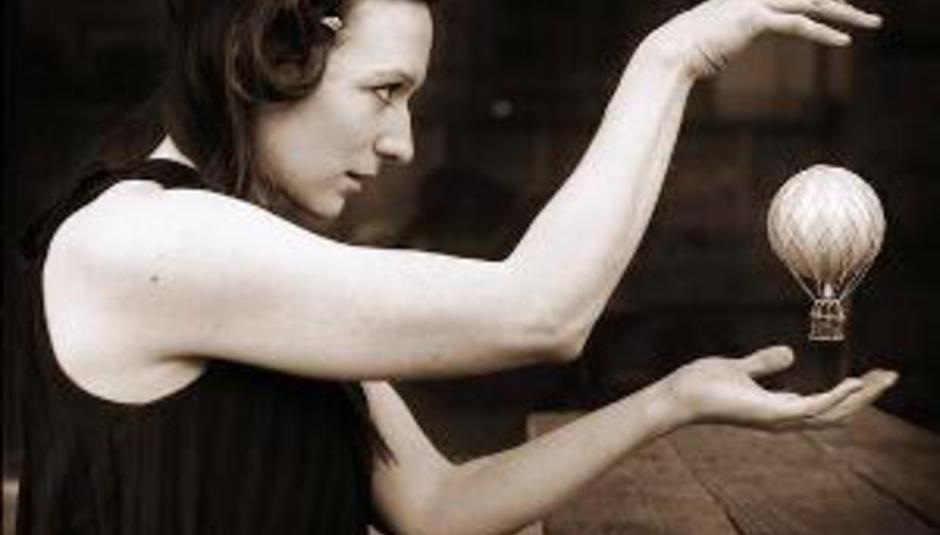 My Brightest Diamond is the project of Shara Worden, a classically trained vocalist and songwriter from New York whose frequently ravishing debut, Bring Me The Workhorse, enjoyed a belated release in the UK last year (review) through Asthmatic Kitty. Its follow-up, A Thousand Shark’s Teeth, bleeds out a little of that record’s swashbuckling introspection for a more even-tempered sound that’s nuanced and astutely underplayed; everything you’d want, in short, from a second album by a gifted songmith. Self-effacing and quick to boisterous laughter in interview, DiS makes Worden’s acquaintance over a swift half in a Clerkenwell boozer.

You seem to have enjoyed quite a liberal upbringing, in musical terms at least (both her parents were musicians). Were there no illicit thrills to be had through music when you were young as a result?

My parents never restricted anything, there was nothing off-limits. I mean there was plenty of rebellion, it just wasn’t… musical (laughs).

I mean your own music’s not easily categorisable – do you attribute that to your family background at all?

Well I think part of it is it’s been a very long struggle for me, it’s been hard work... Someone like Joanna Newsom has such a clear voice, such a distinct sound and she had that as a very young person. I’m 34 and I’ve had to fight tooth and nail to find my own musical language.

The new record seems a bit better integrated somehow, maybe in the recording or arrangements… it’s even a bit ambient, comparatively speaking, wouldn’t you say?

For me it’s been more about learning how to obscure sounds, creating more watercolours… The relationship with the strings on Bring Me The Workhorse, stylistically I was going for a Frank Sinatra, Nat King Cole kind of thing, a fifties crooner vibe, and then for this record I didn’t want that at all so there’s none of the flourishes that came with the first one.

Some of the songs on there were actually written before those that appeared on Bring Me The Workhorse; is it strange revisiting that stuff now?

It’s eight of the songs, actually… But yeah, it’s been strange in a good way I think. It gave me objectivity over the emotional content of the songs, you know when you’re writing you’re very much in the present, it’s an impassioned state, and I wanted a bit of that distance so I think that was good.

Can that equally be a double-edged sword in terms of keeping the material sounding raw and fresh?

I didn’t feel disconnected from the material; I felt I had a certain responsibility to those songs, you know I did kinda think maybe I should just start with new material…

Did you maybe sit on some material in favour of the older songs then?

Not necessarily… It would have felt bad not getting that stuff out, you know I would have lost the song (‘The Diamond’) the band’s named after…

Do the old and new songs on there link thematically for you in spite of the time gap between writing them?

I think there are definitely parallels there, for example ‘To Pluto’s Moon’ has the same subject matter as ‘Gone Away’ (from the first record), so I didn’t feel I could put both songs on the same album because I felt they were dealing with the same things. But with these songs there’s something about escaping the mundane, and also seeing your life in a really minute way and then also in this kind of overview, from-the-cosmos kind of way as well. The last three songs that I wrote (‘Inside A Boy’, ‘Ice And Storm’ and ‘From The Top Of The World’) all had to do with that thing of seeing things from afar, [but also] of being in love with someone and it feeling like you’ve discovered and entire universe, so I think I was more deliberate about it in the end.

There’ve been some pretty excruciating attempts at fusing rock and orchestral music in the past; has it been a difficult balance to strike?

Yes and no because it’s been done by Abba, The Beatles… everyone uses strings, it’s just a question of proportion; of the way you’re using the instrumentation.

Yeah. And I’m tired of it… my next record’s just gonna be me and a beatboxer (laughs).

Ever thought of touring My Brightest Diamond in artier circles at all?

Does that bother you at all?

No (laughs)… because they’re songs, I’ve never seen myself as a composer. I love classical music and going to concerts but I don’t have any aspirations towards that.

What is it you like about pop that maybe isn’t catered for by classical music?

You know I’ve asked myself that question and I feel like classical music has always been… it’s like I’ll go to a concert and I’ll hear a piece of music and I’ll think about it but I don’t need to listen to it again… you can have a really intense experience but you don’t need to have a really intense experience every day. But I tend to listen to pop music on a daily basis.

To me pop music is the music of the people, we used to use the word folk for that but we now it’s pop.

You’ve cited (Amélie and Delicatessen) director Jean-Pierre Jeunet as an influence on the making of A Thousand Shark’s Teeth. What was it specifically that inspired you about his films?

I love Jeunet, for me it had to do with the moods and the colours… when I think of his films I hear marimbas and cellos and saws, and that’s the ‘colour’ of his films for me, so I wanted to a evoke a similar mood with the record.

Again on a visual theme, you’ve mentioned (German painter and sculptor, look here) Anselm Kiefer as another source of inspiration – how did that manifest itself on the record?

Much of Kiefer life’s work has been about man’s desire to ascend to the heavens; to escape his condition, he uses cement staircases in his work a lot, and he also uses ladders. He’s also done a lot of things on the Holocaust, so those ideas are definitely in his work as well. Some art just resonates with you, and you may or may not be conscious of how it’s working on you, but you find these points of resonance with different people and if you write something that’s universal. It’s like tuning forks you know, when things just resonate with the same frequencies.

Those points of resonance, are they something you feel you’ve achieved with any of your previous songs?

I have no idea, you can only hope. I know when you’re writing something you know if you like it for yourself but you actually never know whether people are going to connect with it.

A Thousand Shark’s Teeth is out now on Asthmatic Kitty. No dates are planned for the UK at the moment, but you can check the official website or the MySpace and keep fingers peeled and eyes crossed 'til then.