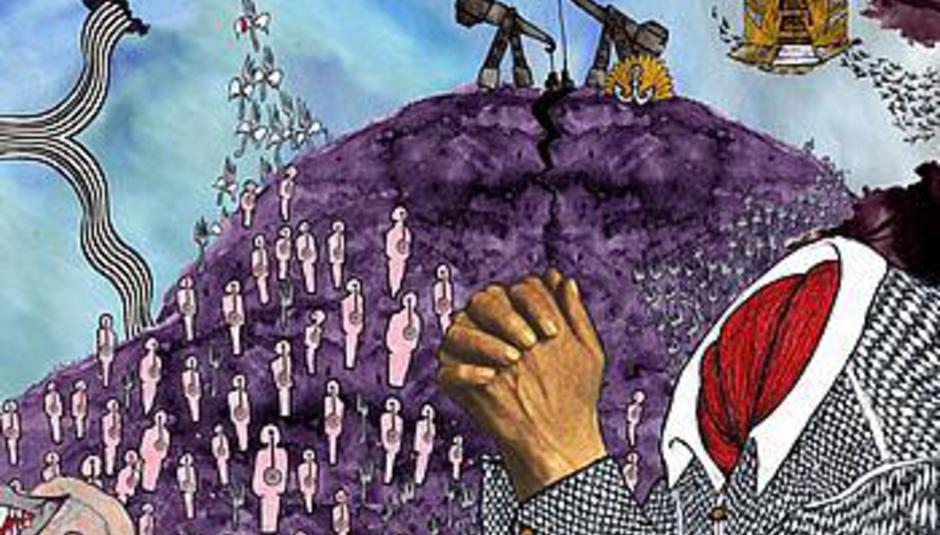 Subtle - 'Unlikely Rock Shock' (Lex)
Considering Subtle are more renowned for their slow-release synapse stirrers, this standalone lifted from latest LP ExitingARM (review) battles against any established grain by shaking its cards from sleeves as early as the first few seconds: wobbling bass ripples caress the ear canals, squelch-drenched percussion that pummels the listener from the outset remains a constant, and Doseone/Adam Drucker appears high in the mix with his nasally insistent rhyme schemes. Rarely ones to adhere to any structure deemed traditional by critics eager to categorise their subjects into easily understandable boxes, ‘Unlikely Rock Shock’ nevertheless clocks in at a pop-consumable three minutes; but what’s contained within these tick-tocking seconds is more thrilling than any number of the below’s best efforts, this week or any other. An uplifting, creative and clear-by-a-furlong single of the week. MD

Son Of Dave – ‘Lover Not A Fighter’ (Kartel)
Like a live enactment of one of those dreary conversations with pompous old douchebags who delight in proclaiming the hitherto undiscovered link between blues and rap music, 'Lover Not A Fighter' equals dull times indeed. For a modernist blues squall worth hollering about you’d really do much better with Tom Waits’ Real Gone; this just sounds like the gravel-larynxed one being forcefed fruit smoothies by Mr Hudson & The Library, while Flight Of The Conchords take fastidious notes in the background.

The Kills – ‘Last Day Of Magic’ (Domino)
Not sure who’s been orchestrating The Kills’ singles campaign of late but the releases from third LP Midnight Boom just seem to get better and better – first we had a clunker in ‘U.R.A. Fever’, ‘Cheap And Cheerful’ was an interesting rhythmic diversion if not much of a song, and then there’s this, a streamlined, silver bullet of stuck-minded bass and clipped electronics that fairly rattles along as Jamie Hince and Alison Mosshart trade verbiage like blows from the proverbial sexy stick.

Mirror Mirror – ‘New Horizons / Lock Up Your Sons’ (Half Machine Records)
Starting with an acoustic arpeggio that sounds a lot like Portishead’s ‘The Rip’, ‘New Horizons’ quickly delves into a witchy, new age world of rippled-surfaces psych with a curious, ambient sheen that sets this slightly apart from the more straightforwardly Barrett-worshiping tribes. A New York ensemble featuring Telepathe’s Ryan Lucero on guitar, this is a strangely unsettling double-A in the way that Brian Eno or even Robert Wyatt’s childlike intonations occasionally suggest suppressed trauma – spooky, in short.

Sportsday Megaphone – ‘LA’ (Sunday Best)
It’s ersatz keys and estuary English ahoy for Sportsday Megaphone who come on like a pleasantly underwhelming cross between Los Campesinos! and Errors on ‘LA’ – strange, really since it turns out to be a damning critique on the American way (“this is the USA and if you’re not on the team you can stay on the street for the rest of your life”), which is rather like delivering a funeral speech after sucking on a tank of helium.

White Williams – ‘Violator’ (Double Six)
One of the standout cuts from Brooklyn glitter-kraut Joe ‘White’ Williams’ fine debut album, ‘Violator’ struts in on a bassline that pretty much sums up everything great about its creator. Loyal, laid-back, champion sound from the 24-year-old that recalls only the best idols - Reed, Rother, Bolan and Bowie – but still manages to overcome that hefty challenge to sound entirely its own. KK

The Bug – ‘Angry’ (Ninja Tune)
Cementing The Bug’s status as what is effectively a hotpot of all the projects Kevin Martin has sunk his teeth in on (jazzcore, industrial, dubstep…), ‘Angry’ sees dancehall brashly rub up against grime basslines as reggae uncle Tippa Irie grinds his way through a tale of the things that get ol’ Tippa upset (terrorism, smiling fakers). Admittedly one of the weaker efforts from London Zoo but solid enough psychosis to keep Tippa from gun-butting everyone. SS

Padded Cell – ‘Word of Mouth’ (DC)
At home in the same dark disco as Emperor Machine, London’s Padded Cell are hot for the sound of early ‘80s New York, bass stripped back to a buzzing wire that plots a course through drums crisp and stark. Here they enlist Chloe Raunet of local scene tippers Battant to provide vocals, which means that ‘Word of Mouth’ sounds like an Au Pairs song given too much spit and polish. Heaven knows DiS adores the barely-there qualities of ESG, Arthur Russell and Liquid Liquid but Padded Cell – usually on the money – fall down here due to a lack of high-freq glitter tossed the way of a sluggish bassline too dull to carry Raunet’s generic nocturnal wail for five-and-a-half minutes. There’s a gem on the flip, though – Chrome Hoof’s Milo Smee guests as ‘Binary Chaffinch’ to skew ‘Word of Mouth’, his remix proof that Chinese whispers are more pertinent to clubland than anything the horse's mouth has to offer.KK

Bobby Digital – ‘You Can't Stop Me Now’ (Koch)
Originally destined for 8 Diagrams (review), ‘You Can’t Stop Me Now’ is one of the few moments RZA – out on force under his Bobby Digital guise – uses a principal member from Wu-Tang for his forthcoming third solo record, Digi Snacks, with the lumbering Inspectah Deck sat beside the imperious beatnik for this initial offering. Featuring a straight-laced sample from Barrett Strong and Norman Whitfield’s tireless ‘Message From A Black Man’ (Temptations’ rendition) could be seen as playing it safe with such fist-raising overtones of old. But, with those kung-fu cuts, frail guitar hooks and brutish bar room choruses, familiar and same-old is a safe bet for brilliance as Diggs slow-jaws his way through detailing the rise of RZA. A modest introduction to what is bound to see the Wu dictator indulge his “hip-hop hippy” tendencies. Tidy. SS

Luke Leighfield – ‘If You Haven’t Got Anything to Say’ (Banquet)
“If you haven’t got anything to say, don’t say anything at all.” Aside from writing his own reviews, the only reason I can see for the continued existence of Luke Leighfield is that he’s an incredibly nice man. But all the good will in the world can’t stop ‘If You Haven’t Got Anything to Say’ overtaking ‘Chelsea Dagger’ as the worst thing I have ever heard. It’s music like this that gives the middle classes a bad name – boredom is not an effective response to boredom. It creates a horrible Zen circle of inertia that drags anyone unlucky enough to be within earshot into a purgatorial vacuum that smells overwhelmingly of potpourri and is fitted out like a branch of Claire’s Accessories. Still struggling to find justification for the tepid vocals, ‘comedy’ metal solo and lame keys, all I can muster is that Luke Leighfield remains the single most convincing reason to date why people like Get Cape. Wear Cape. Fly, Chris T-T and Scouting For Girls should be bound and gagged, sat in front of a mirror and made to watch as the oxygen slowly emigrates from their lungs. KK

Other singles: find them at stores online and high street.