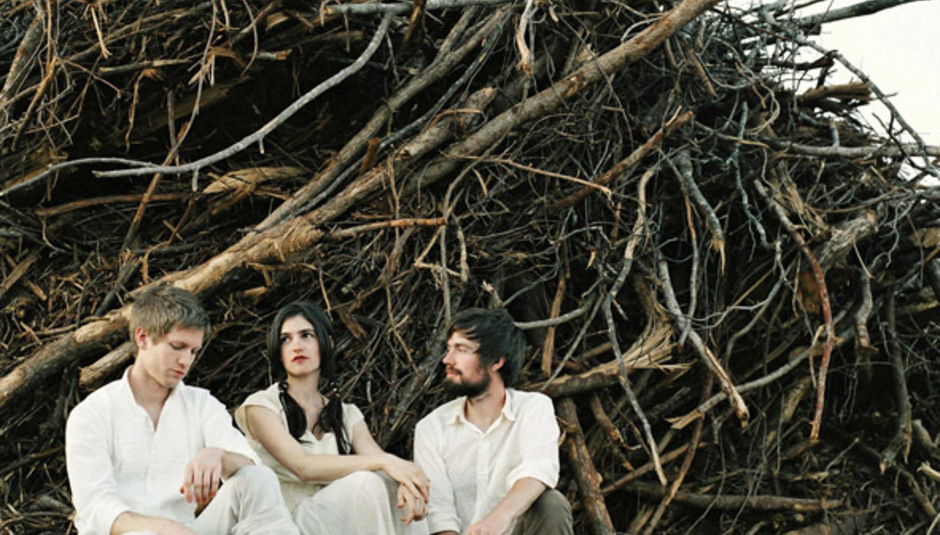 On paper, Bowerbirds may be one of the most picture-perfect twee-as-folk indie bands around. They’re made up of Phil Moore (guitar and vocals), Beth Tacular (accordion and vocals) and Mark Paulson (violin, piano and vocals). They’re named after an Australian species of which the male lures females by building a spectacularly decorated nest adorned with blue flowers, shells and stones.

“Beth was looking for art ideas,” Phil explains, “and we just found them in a children’s encyclopaedia. We didn’t know about them either – we realised they were these amazing birds that could manipulate their environment, that were kind of artists in their own right’”

Bowerbirds sing, in gorgeous three-part harmony, songs with names like ‘Bur Oak’ and ‘The Marbled Godwit’ (that’s another kind of bird – Phil studied biology and once tracked Swainson’s warblers for a living). Beth created the cover art for their enthralling debut Hymns for a Dark Horse; Mark built the mics they used to record it. After earning an utterly deserved 8.4 from that site last year and effusive praise from John Darnielle of the Mountain Goats and Justin Vernon of Bon Iver, the album earned a domestic release on August 25. But all is not as it seems in the nest. Bowerbirds are not particularly beautiful or tuneful creatures, Phil points out: “Their call is a little annoying, a little awkward at times”. Hymns for a Dark Horse’s spare arrangements and sinister lyrics pull awkwardness and discomfort out of every sunny verse, revealing a vision of darkness that gives Will Oldham’s “terrible imposition” a run for its money.

In 2005, Phil and Mark were living in Raleigh, North Carolina and enjoying local success as two-thirds of avant-garde/folk trio Ticonderoga. Phil and Beth met in Whole Foods and promptly shacked up together, eventually settling down in a vintage Airstream in the countryside outside of Raleigh, where they now own four acres of land. “We’re kind of straddling the old-timey and the modern age,” says Phil. “We finally got running water after a year of not having running water. We had a well, though. So we’re living kind of off the grid, but kind of not. We have a little electricity. We can afford, like, one solar panel.”

In the meantime, Ticonderoga was undergoing a painful break-up. Phil retreated to solo work and focused on the web design company he and Beth had founded. He also started to teach her to sing and play accordion. “I think we realised we worked really well together,” he says. “Working together as a band wasn’t an intentional thing at all. It was about a month and a half before our first show and Beth was just learning how to play the accordion – well, figuring how to make sounds come out of it – so we were like, if you can learn some of these parts then we should play a show together. It was all hinging on that one show.”

Bowerbirds’ sound is bewitching: high, shimmery violin and rising major chords float above discordant piano and nervy bursts of percussion. Phil’s clear, warbling vocals have a raspy edge that sits uncomfortably with Beth and Mark’s harmonies. His phrasing pushes and pulls words around the time signature like taffy, sliding in and trailing off unexpectedly. Accents fall in the wrong place; songs finish abruptly. And then there are the lyrics. ‘Hooves’ opens the album with a disturbing image of Phil’s birth: “I nearly split my momma in two”. ‘In Our Talons’ offers an equally sinister vision: “My cousins, you’re not alone. You’re in our talons now, and we’re never letting go. You’re in our headlights, frozen, and no, we’re not stopping”. ‘Human Hands’ conceals its poison darts in smoothly resolved descending scales. Never has a refrain so bleak as “There is hate all around” been sung with such sweet abandon. Why on earth do people peg you as a cute folk band, Phil? “I think it’s kind of fun that people don’t necessarily get it on the first listen. They probably think we’re happy-go-lucky, or carefree hippies! I don’t consider myself a carefree hippie.” ‘The Marbled Godwit’ sets the band’s uncomfortable relationship with modernity against an enduring reverence for “the land and the sea”: “I feel its scale, I feel its industry, making a flea of us… Death to the civilised; death when all want masquerades as need”. “I’m actually a little uncomfortable with a lot of those songs and how accusatory they are,” Phil admits. “I’m not sure it’s the right decision, you know? For example, ‘Human Hands’ feels a little… I mean, I agree with what it’s saying, but you have to constantly question yourself. So at the time I wrote it, it was exactly how I was feeling and exactly how angry I was. But I’m never sure if it’s my place to even write things like that. Because who am I really? I don’t have the answers. I’ve always shied away from considering myself an activist. I feel like humans don’t have very many answers, or if we do, they’re always changing, and they’re often wrong. I try to write all these songs from a very personal place – I don’t really want them to be accusatory. I guess that’s just how they come out sometimes.”

Bowerbirds' songs leave your heart squirming, somewhere between pinched in anguish and full to bursting. “I could find something to be truly depressed about every day if I let myself,” Phil sighs. “I don’t see a lot of hope in our path. America’s just so insular. A lot of us are trying to separate ourselves – I don’t mean just Americans – from a destructive culture by any means. It’s wonderful that it’s happening now, and I hope it’s not just surface. It’s like recycling – you get caught up in a few things and feel like you’re doing right by the earth, but it has to be a constant thing you think about, every day of your life. It’s a constant struggle.”

Hymns for a Dark Horse is out now on Dead Oceans. See Bowerbirds (MySpace) live in the UK as follows: