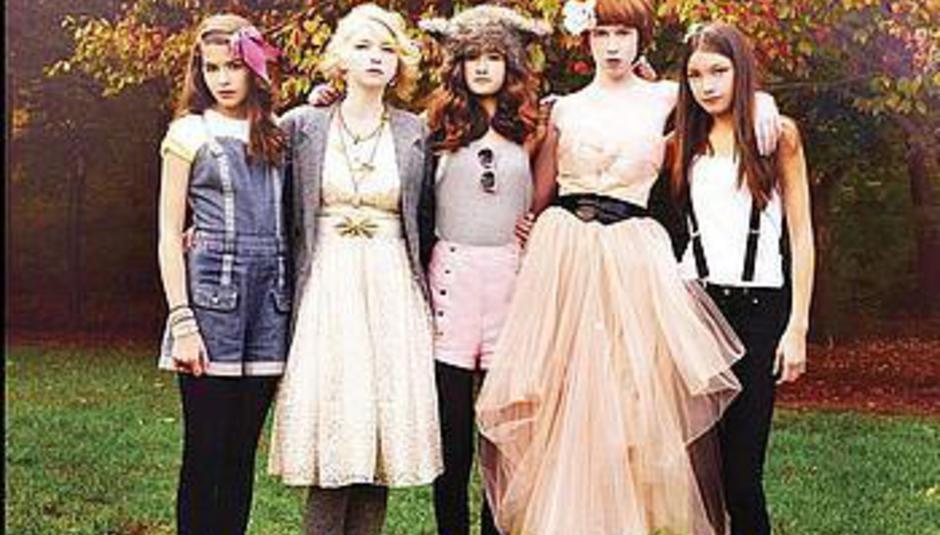 M83 – ‘Kim & Jessie’ (Mute)
The latest single from M83’s Saturdays = Youth LP (review) finds Anthony Gonzales exploring ‘80s-tinged synth-rock with a shoegaze glaze – ‘Kim & Jessie’ could be a cut from The Lost Boys’ soundtrack, where it’d sit comfortably beside ‘Cry Little Sister’ and Echo & The Bunnymen. Where its place is beside the present invasion of keyboard-carrying dance types from the southern hemisphere is questionable – M83’s material is often far slighter, more concerned with subtleties than obvious hands-aloft builds and sweaty falls – but the processed vocals from Gonzales and an overall air of nostalgia that manifests itself during the four-minute radio edit runtime – oddly enjoyable for a brand-new track – combine to craft a delicious electro number that sells its parent LP perfectly.

Ida Maria – ‘I Like You So Much Better When You’re Naked’ (RCA)
Ida Maria is clearly not the best of vocalists but the hearty Norwegian singer packs in a sizeable vocal hook on this return. Although a somewhat amateur lyricist with lines such as “Okay, you're kind of sexy / But you're not really special”, credit can undoubtedly go to the band’s chanting chorus that fuels the this song’s appeal. Pogo-dancing enthusiasts are sure to love the speedy bass lines, which illustrate a slight punk influence with odd echoes of Rancid, and with the clear panache and passion that this girl is carrying we can begin to look forward to her live return in a town near you. JG

Fleet Foxes – ‘White Winter Hymnal’ (Bella Union)
There’s magic in those Bella hills: after the successes of Midlake, Fionn Regan and Howling Bells, the little label that can is again attracting critical praise by the several bucket loads for signing up Seattle’s Fleet Foxes (they’re signed to local label Sub Pop stateside, and therefore earn extra cred points). ‘White Winter Hymnal’ finds the folksy fivesome at their most understated arrangement-wise, barely any instrument making an impression to compare to the smooth vocals of frontman Robin Pecknold. What he’s singing about is hardly summertime fare – scarves and snow, with the slightest undercurrent of something sinister lurking in the off-piste powder – but even if the lyrics don’t suit your sunny disposition at this time of year the band’s exquisite melodies will charm whatever the season.

Adele – ‘Hometown Glory’ (XL)
Rightly re-released after a pair of not-as-magnificent singles – ‘Chasing Pavements’ and ‘Cold Shoulder’ – Adele’s signature show-stopper ‘Hometown Glory’ is yet to dull; its reach is yet to fall short of the heartstrings it plucks at so very delicately via hypnotising piano lines before shredding them with that voice, truly unleashed. The Londoner isn’t always at her best when she’s really belting them out, but the contrast she displays here – from a whisper to a scream – ensures that this ultimate standout in a small-so-far catalogue will become a mainstream radio staple. You’ll be hearing it in five, ten, twenty years time on stations that regularly return to the past, and even then you’ll likely feel a tingle comparable to the first time you heard it.

The Ting Tings – ‘Shut Up and Let Me Go’ (Columbia Records)
It is hard not to remember (and definitely hard to ignore) The Ting Tings’ debut single that drove many indie kids into their nearest discos to experience the hip electrifying tune‘That’s Not My Name’. Similarly, the Salford duo’s latest single ‘Shut Up and Let Me Go’ serves up another captivating and potent melody line with a funky guitar jangle that could make even the most taut of dancers break out a sly, occasional jiggle. There are moments during Katie White’s repetitive vocal hook when you begin to wonder whether the song is actually going anywhere, displaying its flimsy structure and lack of cohesive creativity, but you can be sure to expect The Ting Tings to circulate many DJ playlists for some time. JG

Psychedelic Horseshit – ‘New Wave Hippies’ (Halfmachine)
Mates of Times New Viking, Ohio’s super-lo-fi trio-trimmed-to-a-duo Psychedelic Horseshit (play bass? Get in touch!) bark their disgust at the new wave hippies loitering their ‘hood, huggin’ all kinds of trees, in typically rambunctious fashion, every instrument gurgling under a thick gloop of fuzz and fucked-up phonics. Eventually a keyboard is set upon by angry ants, and everything goes from being loosely pop of structure, albeit heard through a filter of your finest tin-box production, into a mess that sounds perfectly like noisy, bratty kids allowed to ‘write’ their own songs during a wet lunch break at a primary school. Genius? Crap? You choose, ‘cause this has burnt my brain.

Death Cab For Cutie – ‘Cath’ (Atlantic)
‘Cath’, taken from Death Cab For Cutie’s new album Narrow Stairs, depicts vocalist Ben Gibbard’s indulgence in a romanticised and melancholic view on the life of a young pitiful girl. Boring, some may say, especially when coming from the mouth of yet another college boy geek. However, immediately from the start Chris Walla’s guitar riff picks you up on a certain wave of elation that you can guarantee you will be riding on throughout the song’s course. Death Cab’s dominating rhythm section propels ‘Cath’’s source of entertainment, proving to be an effective platform for Gibbard’s emotion-spiked libretto that is certainly going to reach the hearts of many avid fans. JG

Fairmont – ‘I Need Medicine’ (Border Community)
Expressive minimalism from Toronto artist Jake Fairley, whose work as Fairmont seemed to have reached a full stop a while back before he resurfaced with last year’s Coloured In Memory, a recommended LP of stripped-back electro-shades, from where this standalone effort is taken. ‘I Need Medicine’ demonstrates Fairley’s methodical approach to track assemblage, with everything coming together in its own time, deep rumbles of bass bubbling up from below only once the exoskeleton of trebly clicks has taken its fullest form. Vocals are buried beneath the final structure, restricted to a whisper, but they serve to colour the final piece’s remaining gaps, never running a marker over the lines. A neat and tidy example of modern electronica not needing to come replete with dancefloor charm, as this is cerebral stuff best experienced snuggled under a duvet. Do go listen on MySpace.

The Cool Kids – ‘88’ (XL)
As they state themselves, there’s something very Beastie Boys about Illinois duo The Cool Kids (DiScovered), who precede the domestic release of ten-tracker The Bake Sale with this cut from the expanded EP-cum-debut album. ‘88’ is structurally basic, beats kept simple, percussion deliberately sparse; atop this retro-toned backdrop rappers Mikey Rocks and Chuck Inglish spill entertaining rhymes about the Fresh Prince and more. On paper it’s a lot of not very much, why the fuss, et cetera; but give ‘88’ and its parent record a spin or two more than your initial impressions tell you to and suddenly: yep, that’s why they’re So Hot Right Now. Literally the best hip-hop house party music for summer ’08.

Underground Railroad – ‘Sticks & Stones’ (One Little Indian)
French-bred but London-based, punchy rock trio Underground Railroad showcase their September-released new LP with its title track. ‘Sticks & Stones’ is a fine, slow-grind of a taut rock number, but it could do with slightly sharper teeth – at no point does the track truly bite down and shake the listener, despite an admirably sing-along hook that channels the old “sticks and stones will break your bones” mantra. It’s brooding, undercurrents of real menace evident, but the explosion never comes. There’s no climax, just gradual plot development with no pay-off. As such it’s a final reel short of being a recommended new release.