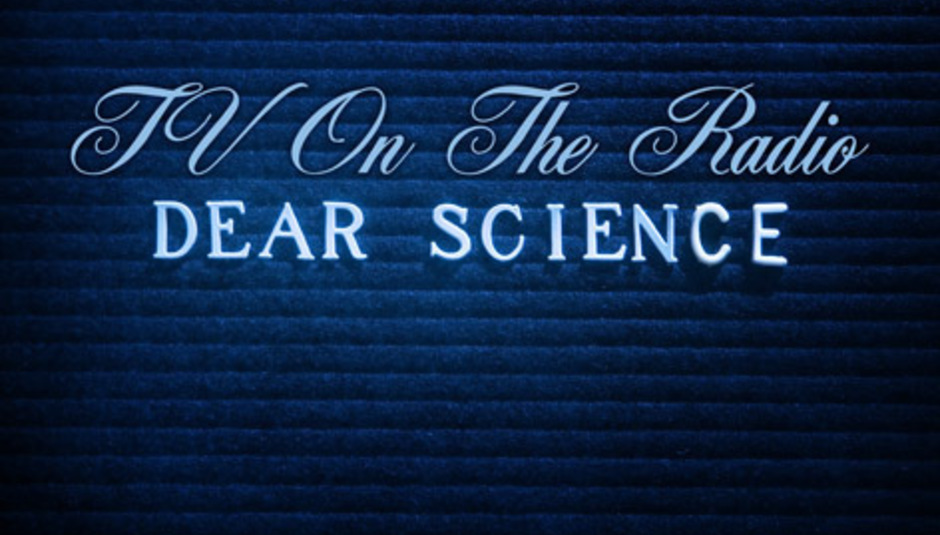 There’s no shortage of intricate, atonal layers, shimmering vocals and sonic explosions of the thrillingly unexpected on TV On The Radio’s third album, Dear Science. But when DiS headed out to the 4AD offices for a too-brief first listen, we were genuinely surprised by what we heard. The effects – drums, strings, synth (a lot of synth) – are shinier than ever, against a sinister backdrop of feedback and fuzz. The vocals are alternately sexier and angrier. And the beats are unrepentantly funky. It’s like the boys have gathered the glammest riffs of three-decades-ago Bowie and Prince and fed them through some mysterious, apocalyptic sound machine – also known as the virtuoso production factory of David Andrew Sitek. All hail their dark vision of the future. **1 ‘Halfway Home’** The glorious, up-tempo opener bursts into your eardrums like a 4am festival epiphany. Pulsing synth, echoey handclaps and euphoric “ba-ba-ba” chanting give way to subdued vocals – a simple, low melody, with plenty of richness and reverb. Soaring chords kick in alongside Kyp Malone’s falsetto as the chanting, clapping and squizzy effects pile back in, building to a triumphant, thrumming close. Then a long fade, like the airlock closing on your last-ever view of Earth as your spaceship blasts into the unknown.

**2 ‘Crying’** The unknown seems to sound a bit like Prince circa 1987 – as futuristic as anything recorded in the last 100 years, then. A high funk guitar and super-’80s drum machine back swoon-worthy vocals (“I got you cryyyyy-ing”) while fuzzy feedback fades in and out. At the end, a trumpet and keyboard exchange words over a simple descending melody. I think the keyboard wins. **3 ‘Dancing Choose’** Blimey! There’s some loud, furious dub fuzz going on here. We’re straight in with a shout, nearly a shriek: “He’s a what, he’s a what, he’s a newspaper man… He can’t understand that he’s not in command; his decisions are written by the cash in his hand”. Lightning-clap eighth notes thwack at the end of each bar; a guitar line twines itself moistly into your eardrum. Oh, this is more like it: “In my mind I’m counting butterflies” goes the (relatively) gentle chorus. Uh-oh, now he’s back to spitting rapid-fire about “angry young men”. The glorious chorus of braying horns that kick in at the end are as much warning as celebration. **4 ‘Stork & Owl’** The intro splices ‘I Was A Lover’ with ‘Darling Nikki’ – but years after the grind, when Nikki’s despondent and facing an existential crisis. “Faceless, I fall from this life” go the sorrowful, spacey vocals as Kyp slides between his punchy lower register and the odd falsetto syllable with breathtaking, virtuoso ease. Plucked strings alternate with soaring, sometimes saccharine chords. Submit to the dark, swelling waves of sound and it’s like sinking gently to the bottom of the sea in a steel bubble, à la Bill Murray in The Life Aquatic.

A throbbing bassline, brassy cymbal and farting synth signal that the party proper starts here. A tender verse builds and swells until out of nowhere, woozy, mind-bending synth and vocals kick in, swirling up and around with no regard whatsoever for the rules of tonal composition. Flashgun pop references slip in and out like shadows, disappearing almost before you’re sure what you’ve heard: ‘Don’t Stop Till You Get Enough’ echoes in a vocal rhythm; ‘Heroes’ shimmers in a euphoric, fleeting interlude; there’s some Talking Heads floating around the quieter moments. Glorious.

** 6 ‘Family Tree’** This is Arthur Russell territory: over an anthemic, über-echoey keyboard intro, a low voice sings of “echoing moonlight”, each caught breath and rested beat resonating as loudly as the note that follows. The gorgeously gothic image of “the shadow of the gallows of your family tree” is invoked over and over as piano, bouncy strings, vocals, shimmery synth and gentle soft-rock drums fade in and out. They’re staggered into rounds with quiet precision, like the kaleidoscopic shadow cast by late-afternoon sunlight as it shifts across a stained-glass window.

High, jangly guitars, bouncy bass and a relentless snare-heavy beat whisk you swiftly from stillness into a heady, sinister danse macabre. There are dark allusions to “the ploughshare and the sword” and an invitation, or maybe a demand, to “come pay witness to the whore of Babylon”. Horns, marimbas, cowbells and all manner of jungly squawks and clatters fill the air like mosquitoes, only to be cleared away by a kick-ass cymbal clash straight out of Kool & the Gang.

8 ‘Love Dog’ Here’s a subdued return to …Cookie Mountain form. “I’m only a little love dog that no one knows the name of,” Kyp laments, over quietly urgent drum pulses and low-register keyboard noodling. There’s a mournful horn line, like the coda of a military funeral march, that gives way to lush harp and then beautifully grating strings. Kyp’s wordless keening, which sounds disembodied even at its most tangible moments, degenerates into a ghostly series of echoes and imagined reverberations.

Against a spare background of relentlessly throbbing 16th notes and the odd echoey glissando, Kyp throws a curve ball, his voice swinging with almost loungey syncopation, then submerged by a clattering four-to-the-floor chorus. It ends on a nifty wammy-barred guitar solo that’s quietly noodled along for most of the song and winds down like the last jangly bars of ‘Diamond Dogs’. I’m not sure if it’s a dud or three and a half minutes of genius.

A trip-hoppy beat meanders down some shadowy path towards ominous, drawn-out chords; they could as easily be the swelling, wordless cries of ancient mourners. Out-of-breath vocals spit esotericisms with intent: “the dog wants a bone”, “the dog’s lost a lead”. Sweet opiate choruses blow through like smoke but, by the end, it’s crashed into a relentless, solipsistic refrain that seems to go on forever. In the uneasy stillness of the last few bars, menace remains.

11 ‘Lover's Day’
Crisp sleigh bells open with the innocence of a Christmas carol, but what follows is a roll call of pomp and glory. Thundering timpani and throaty vocals burst in at measure three; four sees marching drumbeats shoulder their way to the front, followed by the crystalline vocals of Katrina Ford of Celebration like some apocalyptic angel. Every instrument, every breath, every beat builds to a euphoric high and then drops, mid-song, only to build slowly and teasingly again in a drawn-out climax. Abrasive Roxy Music woodwinds, clashing cymbals, military-precise snares, trilling clarinets and pounding brass – a whole American football field’s worth of marching-band instrumentation snaps to wild-eyed, hypnotic attention. “Yes, of course there are miracles,” Kyp intones. You better believe it.

Dear Science is released via 4AD on September 22. Find the New Yorkers on MySpace here and see them live in London at the DiS-partnered Concrete & Glass festival in October – details here.