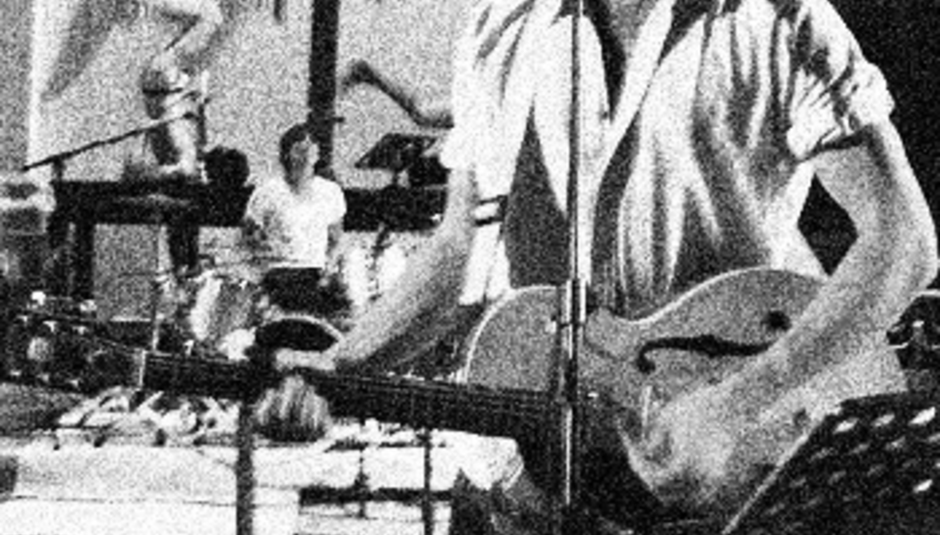 Half a week with The Hidden Cameras

Half a week with The Hidden Cameras

Half a week with The Hidden Cameras. Half a week with one of the most provocative, most exciting, most down-right exhilaratingly fun bands in the western, and probably eastern, world. A tour diary; charting their movements, emotions and thoughts throughout their brief jaunt around England.

At least that was the plan. Due to unforeseen planning problems and hideous levels of alcohol consumption a Plan B of a review/introduction/biography/interview is drawn up, and Drownedinsound finally catches up with members of the now-worldwide collective, themselves a little worse for wear, an hour before showtime at the Ruby Lounge in Manchester.

Before this the seven/eight/nine/ten-piece, headed by songwriter/guitarist Joel Gibbs, have touched down in Brighton and London, playing respectively in a tiny community hall and a grandiose church, and have turned both into an Alice-through-the-looking-glass neverworld; a unique blend of twee indie-pop, sexual politics and vivid, hedonistic imagery soaked in an almost cultish atmosphere, on both sides on the band/audience barrier. Indeed it's almost a travesty to dismiss these dates as mere gigs; they are events, occasions, celebrations.

As the band blend 'Day Is Dawning' into 'Learning The Lie' with heavenly harmonies and off-white noise in equal amounts I imagine this is what the first Neutral Milk Hotel, or Godspeed You! Black Emperor, or CAN gigs were like; a true musical collective not performing but interacting, inches away from the audience, a sense of purest, child-like wonder in the air, limbs flailing everywhere.

In Brighton there is a sense of community perfect for the venue. The band crowd awkwardly on the stage, barely fitting in its confines and yet they still manage to explode around it. The first thing that is evident is that despite delivering the same euphoric high-energy performance that the band are fabled for, there are new directions aplenty.

Gone is the simple Emaj-Amaj-Bmaj acoustic pop of old. 'Origin:Orphan', opener for each of the triumvirate of shows, and an untitled piece showcased during the encore, are full of anxiety and assonance, resting closer to fellow Canada-based collective A Silver Mt Zion than their own earlier work. The latter burns on building drums, violin wails and shrieks, and finds Joel exploring a Johnny Cash-style drawl. At the other side of the coin are 'He Falls To Me' and 'In The Na', bubbling maelstroms of falsetto, handclaps and electronics that Of Montreal and Patrick Wolf, a guest musician on Saturday's show, have grown fond of recently.

After introductions and inane innuendo this is the first topic of conversation. Joel states that the songs come from “Three albums which have already been written. There's an electronic one and a country one, which I've added lots of strings and banjos to.” Although he doesn't specify which album will be the first come out he does reveal that it will be produced and mastered outside of his hands; “I'm sending it off in a few weeks to a producer. I want someone to take it off my hands, to change things around, cut things out and put them in.”

Which may further represent a crossroad for Joel and the band around him. Since he started writing songs under the name of The Hidden Cameras in 1999 the group have remained fearlessly independent and decidedly different; all of their materials have been released on Evil Evil, a label run with an extreme proximity to the band in their home country, as well as offering merchandise such as skull beanie bags, tote bags and underwear.

Despite their place on the Rough Trade roster the mini-tour has also been run almost fully independently, with band manager Thomas and promoter Craig taking charge of all operations, and the band have fully realised their reputation of playing in unconventional housings.

The Ruby Lounge is slightly more recognisable as a regular venue, and tonight it hosts what has been labelled by many as 'the Anti-Pride', a less commercial alternative and more inclusive alternative to Manchester's Gay Pride weekend events, which sees the band appear alongside, and share a dressing room with, David Hoyle, the elusive cross-dressing compere and performer formerly known as 'The Divine David'.

It is in this cramped dressing room that Drownedinsound introduces itself to various members of the band, most of whom flitter to&fro, and actually attempts to conduct an interview. Joel, barely able to talk due to a throat injury, and keyboardist/cheerleader and Maggie McDonald, acting as a spokesperson for the band, stick around for a right ol' chinwag:

DrownedInSound: Well as you may have been told this was supposed to be a tour diary, which that hasn't come to a complete fruition. But nevermind. How was your trip into the country? When did you all get in to the country?
Maggie: We didn't travel together. Joel has been in London for a few days. I got in from Toronto on Thursday, there was a seven hour delay and all we got was a meal voucher...Jamie, our violinist, lives in London. The rest of the band are from Germany or Croatia.
DrownedInSound:I didn't realise that the band was so spread around the world.
Thomas (Manager):Yeah, there are over fifty 'Hidden Cameras' now, who play in over one hundred bands themselves.
DrownedInSound:How did you meet all of the band members?
Joel:Jamie (Violin) I actually met through a journalist, who told me his boyfriend played violin. We met him in London on our first UK tour (review here). There are a couple of guys from Bavaria who were in the choir for a gig we did in Germany for the footballer Mehmet Scholl's retirement party. I met Joel in university, near Toronto. I've been in the band since The Hidden Cameras' second gig, which was in 2000. I just did projections then as I couldn't play any instruments.

DrownedInSound:So the original plan for this was a tour diary...can you sum up what you have done so far?
Joel:We didn't get to spend as much time as we would have liked to in Brighton...just straight to the venue and back...I was in a bad mood, my voice was shot. I've had to cut out all the songs with high notes.
Jamie:My friend Joe said you sounded a lot better than the last time he saw you, at The Union Chapel gig...
DrownedInSound:I'd noticed that on your new songs you were singing a lot lower. Your voice has kinda picked up a droning quality, but in a really good way..
Joel:...I always seem to get sick in London.

DrownedInSound:Did you get upto much after the show yesterday? My friend Jonny ran into your violinist outside the Joiners Arms, and we spotted you inside...
Maggie:We stayed out 'til around three, which I guess is late for you Londoners. I only went into the Joiners Arms to pull someone else out.
Maggie::We tried to do karaoke in London yesterday but everywhere closes so early..surely karaoke is something you do after you're already drunk?
Joel:I've never seen any bar close in Berlin..
DrownedInSoundHow are you finding living in Berlin?
Joel:I love it. There are no rules..well, hardly any.

DrownedInSound:Speaking of Europe, how long will this tour go on for? This is your third and final date in England, what are the plans after that?
Joel:We are playing Paris, Hamburg, Malmo, Heidelberg, Bergen, Traunstein, Stockholm. Then we won't be playing for a while. I've written three albums, but I don't know when they will come out.

At this point the interview is cut-short by the impending stage-time. The band storm the stage of The Ruby Lounge as they have on the previous two shows. They are slightly more reserved but the audience is just as responsive, shouting back each line with joy and free pride.'Golden Streams', a highlight in both a drum-machine aided and raw&naked form in Brighton and London respectively, is unfortunately omitted but the band replace this with a euphoric version of 'Breathe On It', complete with dancing from Maggie and a couple of guests.

After the gig the band (and drownedinsound) crash at a house kindly provided by local promoter Victoria Conway, before making the short journey to Paris. Hundreds more converts surely await them, waiting to worship at the church of kaleidoscope pop perfection.