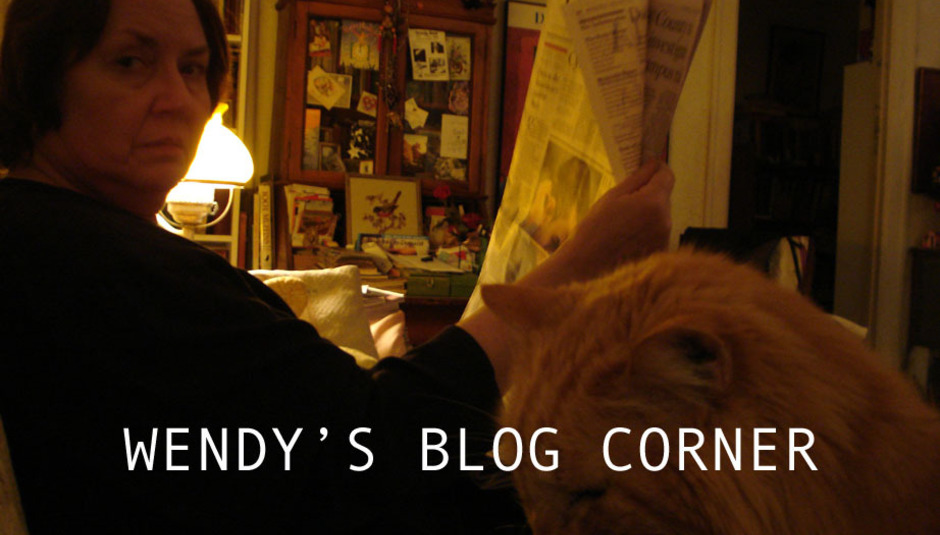 As you may have noticed, it's Grizzly Bear Week on DiS, and we've got tonnes of exclusive content from the awesome foursome. This feature is arguably one of the best things we've ever run. Guitarist Daniel Rossen - also of Department of Eagles - gives a little introduction to this unique feature below.

My mother, Wendy Rossen, has become quite the follower of the indie blogosphere in recent times. In the early days she mostly kept it to GB news. She'd dig up user reviews and concert photos, print them out at work and send them in a care package. These days she has branched out to general indie community research – browsing around Pitchfork and Gorilla Vs. Bear, staying up to watch our contemporaries on late night TV and reporting back with e-mails filled only with lists of sundry indie-community news and thoughts on various artists that may or may not have anything to do with GB.

We tried to convince Wendy to start her own column on the GB website dedicated to her notes and call it "Wendy's Corner" but she has consistently refused. She has, however, granted us permission to post a sampling of her indie-blog research notes. We find them amusing, often informative. sometimes touching, and we hope that you might too.

I hope you are getting a little break between now and the 19th - unless the live dates have been revised. I assume you are driving yourselves as opposed to going on the tour bus with Leslie! It appears she has quite an entourage, but who were all those people dressed in white in the back on Conan?? She looks so tiny and that guitar is sooo big. I do like her voice though. The Village Voice Town Hall review (Feist only) was a little gross, but overall reviews are good and GB's are favorably mentioned. I would think even with her fanbase, it can't get much better than for GB to open.

Hope you get the envelope before you leave. You're probably not that interested, but I'm still trying to understand what's going on with the "record" industry. Did you see that Radiohead is not charging anything for their new CD - it's whatever you want to pay for it. There's more to it than that, but still lots of publicity.

Pink Martini got a very good article/Hollywood Bowl review in the LA Times a few weeks ago.

Beirut got a huge review in the Village Voice this week - but the VV reviews are always so mean spirited!

I tripped over Feist's NPR show from 9/28/07 - now I know a bit more about her life. She was asked rather directly about what control she has over her music and big advertising. She indicated it was a give and take -- she had some control, but also had to make concessions to her record co or whoever. She used some of the $$ to give to the micro banking charitable organisations - small loans to poor women to set up local business, etc. '1-2-3-4' video is all over TV now - used for the nano ipod (sp?) in all its delectable colors. Feist said she toured 3 years with Let It Die! That seems a bit long. Her voice was more sandpapery on NPR, not exactly hoarse, but it sounds as though she should rest up a little. I actually bought The Reminder and am a big fan now. Love, Mom.

While trolling for GB reviews, I somehow came across Deerhunter at the Bowery Ballroom on Pitchfork or somewhere and was shocked at poor Bradford Cox’s appearance. He just looked positively terminal and that gold dress didn’t help either. But then I read that he has Marfan’s syndrome — not only does it affect the long bone growth, but aortic aneurysm and heart problems, eye problems and pysch problems can go with it since it is a genetic defect (chromosome 15). Deerhunter seems to be doing very well so I do hope his manager or someone is looking after him. He seems a bit on the self destructing side.

Hope all goes well. It was Josh Groban week on TV - he was on Leno with practically a full orchestra a la Feist and then on Jimmy Kimmel as a sit-down talking guest last night. He played drums with the house orchestra -- no singing at all and came across as very charming, humble, with a sense of humour. Talked about his LA youth a bit. I still don't like his voice that much - big, but too much vibrato or something at the end of each phrase - has he had much voice training I wonder. The Grobanites were out infull force. Tres amusant.


Josh Groban (Valentino A. for A. Victoria) - The most amazing bloopers are here

P.S. were you ever able to download my photos of Ear Park? I like the big view of the playground in the afternoon. It wasn't nearly so green and lush when you were little.

I recently came across GB fan website called grizzlybeargalore -- photos I've never seen and some I have. So I knew about the Jools Holland thing. Megan went to Coachella and brought me a copy of FILTER with a GB feature article - I'm not entirely sold on your new publicity shots - this was the one with the plaid shirt/Christopher and you in the big sweater.

I saw Animal Collective on Letterman last night - never actually listened to them before. They ranged themselves in back of some countertop things covered with plastic and lit within with colored neon type lights - samples only no instruments.

The lead singer (Avey Tare??) sang with his eyes closed almost the entire song. Then there were maybe 3 dancers in the background completely covered in batwing-like fabric sort of turning and wobbling not even to the music. A song from MPP - something about summertime I believe. Of course I am biased but I don't see how GB can be compared with AC - apples and oranges to say the least. Anyway, lots of love.

Grizzly Bear's fantastic Veckatimest is out now. Read our 9/10 review here and keep up-to-date with Grizzly Bear Week on DiS throughout the week for more bear-themed content.