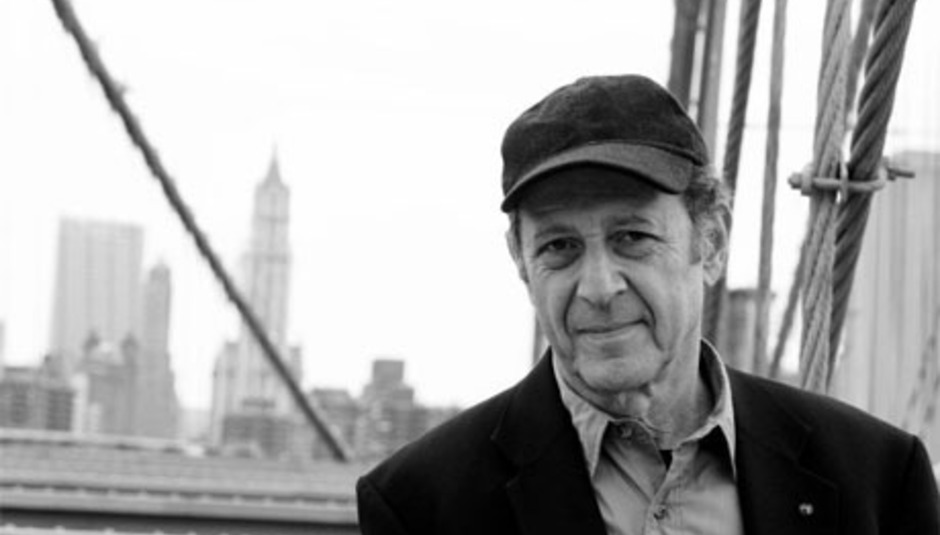 It’s easy to say that Steve Reich needs no introduction , but if he does, French director Eric Darmon’s new film Phase To Face – showing in London this weekend as part of the Open City London film festival – is a great place to start. A mixture of candid interviews with Steve and visuals are accompanied by his music as it tracks the major developments in his style.

DiS was honored to be given some time to talk to on the ‘phone to the composer and director on Wednesday.

It’s interesting to see a film about you, because whilst your music is so influential in terms of film soundtracking, unlike many of your contemporaries you’ve done very little collaborative work with film makers. It was great to see footage of The Cave (Reich’s multimedia opera) in the film…

SR: The Cave was in 1993 – I guess you weren’t around to see that – and it’s being re-done in Strasbourg or Baden-Baden, one of the two cities, in September (actually Strasbourg and Krakow - ed.). It’s a collaboration between myself and the video artist Beryl Korot. We did another piece (in 2002), which you can see on DVD any time you like, called Three Tales, which is also a collaboration. She’s in charge of all the video, makes all the video decisions, and I’m in charge of the music. We think along the same lines and were even married. But I’m not interested in writing movie music. My ideal of movie music is Igor Stravinsky’s Rite of Spring in Walt Disney’s Fantasia. He didn’t write a note – he licensed it and made a good sum of money. I have occasionally had my music used in commercials and used in smaller films. Soundtracks are just not something that I’m interested in, but if someone wants to use my music, go ahead!

Why doesn’t it interest you?

SR: I don’t know… when I go to the movies, I mean, I know the music’s there, but it’s just something that means absolutely nothing to me. I’m not interested!

What for you is the best context in which to hear your music? On record, or live in concert?

SR: All of the above. Music should have legs, meaning it should sound good played at a club, it should sound good if it’s played at Carnegie Hall, it should sound good if it’s a decent recording, or a good recording - or an excellent recording, obviously – and if it doesn’t, it’s either the fault of the players or, uh, something else. I don’t know if you’re aware of Gabrieli, the composer? He wrote way back in the Renaissance for St Mark’s cathedral in Venice, which is huge, and he was famous for writing what are called antiphonal brass pieces. He put one group of brass players on one side of the church and another group on the other side, a couple of hundred feet away, and he had them play going back and forth. I remember hearing that music when I was sixteen years old and I went down to Venice to hear Stravinsky’s Canticum Sacrum and they preceded it with these Gabrieli performances, where the space seemed to be really important. Well, years later I heard that same music on a mono recording – this is back in the ‘50s – and you know what? Sounded great! If it didn’t, it would’ve been lame. Any music which says “well you know it only sounds good in such–and-such an acoustic…” – there’s something wrong with the music! Period!

How do you get the sounds in your music to work so well together? Is there any collaboration with the musicians?

SR: No, never. There never was, and presumably never will be. Earlier on, there was a lot of rehearsal, when I had my ensemble and everybody was young and money wasn’t the question, then we would rehearse every two weeks, so I would write x amount of music and then we would play it. I might change details of orchestration sometimes if a section of a piece wasn’t going well this would become a feedback that maybe I could rewrite it better than I had. Looking at musicians, seeing someone in my own ensemble looking bored, that was a piece of musical criticism that meant a lot. But no, I never collaborated with the musicians about what exactly I was going to write. The closest example of anything even remotely like that was when I was writing Electric Counterpoint (Reich's 1987 piece for guitar and backing tape) for Pat Metheny and I spoke to him on the ‘phone and I said “Look, to be honest with you, all I know is how the guitar is tuned! I know that writing for guitar can be problematic…” and he said “write single notes, because chords could be difficult,“ so I did, except for some very simple triads in the last movement, and it worked beautifully. That’s about as close as I’ve come to collaborating with the musicians.

Is there any new music that you’re particularly interested in?

SR: I can’t think of the title of it, but there was one tune on Radiohead’s In Rainbows album that really knocked me out. I’m very impressed with the fact that there are a lot of young musicians like Jonny Greenwood, who originally trained as a violist, and reads music and is a composer, are also rock musicians. In the recording of my 2x5, the rock piece which was played live at the Barbican a couple of weeks ago, in that ensemble there’s Bryce Dessner who is the guitarist in The National, who is a graduate of Rio School of Music, who has composed some very beautiful pieces… He really is a rock musician and he really is a classical musician. Same thing with Mark Stewart. He’s the music director for Paul Simon and he’s a regular guitarist for Bang On A Can. Monday he’s a rock musician, Tuesday he’s a classical musician. There are more and more people like this and I find that very exciting.

What are your aims with music nowadays, and how is the music developing?

SR: It’s always the same - I just want to write something I love. That’s why I got started when I was a kid and that’s why I’m still doing it. Right now I’m just starting to set up a new piece. It's kind of a double ensemble that will be for the London Sinfonietta that’s going to have thirteen players on stage and the thirteen players prerecorded. Basically writing for 26 musicians, which will include two electric guitars and two electric basses, along with woodwind and strings and four pianos and four percussionists, half of which would be onstage, unless there was the money and the festival venue to be able to put everybody on stage…

If you heard WTC 9/11 (Reich's 2010 piece for Kronos Quartet), then you heard at the very beginning of the piece (a sample of an air traffic controller saying) “they came from Bostonnnnnnnnnnnnnnn” – that “n” of the voice is extended out indefinitely . That’s an idea that I had back in 1972/73, and I wrote it in a concept piece, because that’s all it could be, called Slow Motion Sound, slowing down a recording to many times its original length without changing its pitch. Now in 1972 that was utterly impossible. If you slow down a tape it goes all "Darth Vader." Speed was tied to pitch. Now, with the computer, we have the possibility of separating those two. The first idea I had about WTC, before I even knew it was about 9/11 – I didn’t know what it was about – my first idea was “last syllable of spoken word prolonged, then doubled by strings”. I didn’t know who was talking, I didn’t know what they were talking about, but I had a formal, new, musical idea, a technique I wanted to use. A piece of software was written by Ben Rubin, who helped us with The Cave, way back in the ‘90s, which made it possible to freeze – just like stop action in a film, freezing on a frame – and that’s what really glues WTC 9/11 together. You hear these voices that are prolonged, running into each other, harmonising each other and being doubled by the strings. That was a very important idea which was in a sense an old idea, but became a new idea because I could finally do it! Whether I will have another idea like that in the future, I’ve no idea! We’ll see.

What was your main reason for making the film?

ED: As soon as I heard Steve Reich’s music, thirty years ago, I said to myself “this is the music that I like”. For me he is the most important composer in contemporary music, and he lead to me hearing other great American and French composers that made this kind of repetitive music. Later, when I became a documentary director I decided to make documentary - a portrait - of him. Before I did that I made a film about Philip Glass (2005's Looking Glass), which helped me a lot to introduce myself in that world, and then I was ready to talk to Steve - its more difficult to talk to him.

Was it to bring his music to more people, or to help people to understand his music that they already know...

ED: For me it's very important to make the film as an initiation to Steve's music. Steve gives us the keys of his creation and the keys of his music, and I like the way he gave us the message. I hope - i know - people look at the film and they desire to hear more.

As well as the talking head bits there are the visual sections...

ED: The problem was not to make an illustration of the music but more to give a proposition of what we feel about it and what he says about it. Steve said (about 1998’s Different Trains) "No, its not a story of The Holocaust" - of course its the story of that, but he doesn't want us to just show that, and we understood. He wanted to give us the message of his childhood and what happened at this time - it’s a really biographical piece. So we combined these images and footage of orchestras playing and Steve working to set the rhythm of the film.

ED: When I was in Rome with Steve, Ann Teresa De Keersmaeker was performing this piece so I just asked her permission to shoot the show. For me its the most important piece of choreography for Steve's music, a masterpiece. I just put my camera there and filmed the right moment. Her piece Rain (2001), set to Music for 18 Musicians (1976), is another masterpiece.