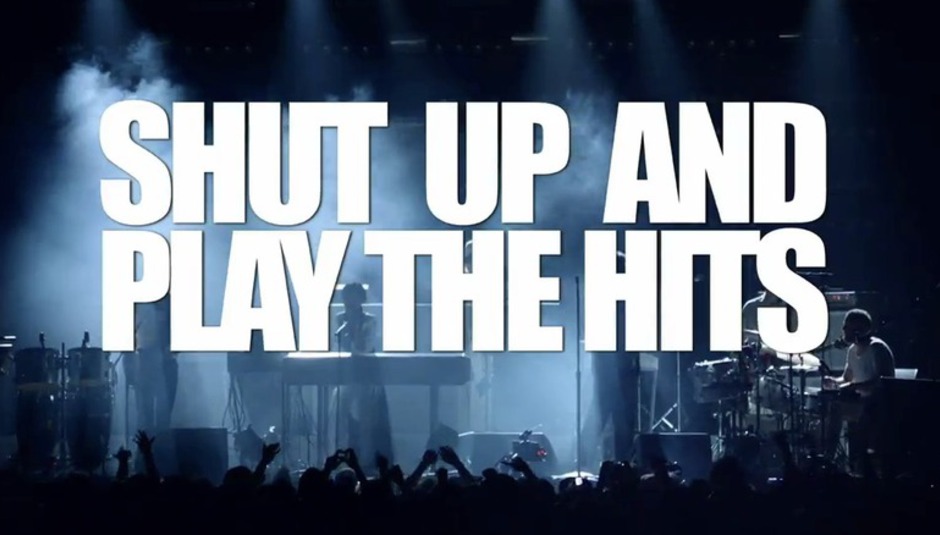 Reviewed: Shut Up And Play the Hits a documentary about the last days of LCD Soundsystem

Reviewed: Shut Up And Play the Hits a documentary about the last days of LCD Soundsystem

How to depict the ending of a band?

Shut Up and Play The Hits is Will Lovelace and Dylan Southern's attempt to chronicle the melange of mayhem that was the last 48 hours of LCD Soundsystem. Maybe not that big a band, maybe not that big a gig, just another night in New York. And yet, somehow, Madison Square Garden on April 2nd 2011, dominated by our generation's answer to David Byrne, became a strange musical Mecca for the web 2.0 generation.

It's part concert film, part depiction of the morning after, part mega interview with Chuck Klosterman a week before the gig, the film captures perfectly the three slightly different perspectives running through those different timelines (it is not too dissimilar to their previous work, which was that brilliant Blur documentary No Distance Left to Run). The one thing this is not is a biography; there are no direct-to-camera interview inserts, no music historians dissecting ‘North American Scum’, no childhood pictures of James Murphy with his records. It's exclusively about this specific moment in time, this story: a rock star walking away from it all, this is his last gig. It's a fascinating snapshot even if you're not a fan; Murphy's existential crisis is what lingers long after the final distorted notes cut out.

Even the opening credits, showing the detailed dismantling of the post-gig stage, manage to capture that strange mix of euphoria and devastation that pervaded the whole event. If you're of a weepy disposition when it comes to your bands calling it quits, it gets worse. As the songs roll, the realisation hits that it's not leading to some major cataclysmic finale; each song being ticked off is a countdown to nothing.

The gig footage is just beautifully shot, daring to veer from the standard concert-filming norms: shot from the audience, stage-side, from the ceiling looking down on the mad audiences, or in Spike Jonze's case, behind a particularly randy couple during 'Us V. Them'. That seems to be most of my gig experiences, so it fits. And the sound... oh my word, the sound production - mixed by Murphy himself, predictably - is honestly a joy, booming and pounding and screeching and all the things that great gig music is. It's as visceral as the band. It's just plain sexy. It all feels as near as dagnabbit to actually being there, at the end of the hipster universe.

The film's flip side is a character study of Murphy himself, at its core being the question everyone continues to ask now: having achieved all this, why in the name of all Williamsburg would you give it up? Klosterman's 'big question' perspective provides Murphy with the opportunity to air a lot of the scientific rationale. What makes Murphy such a compelling star is his precise normality: the idea that if this everyman, approaching middle age and with his dog for company, can get up on a stage and become a voice of his generation, just maybe we all can. When at one point he remarks that "I was 38 and I decided to make a record; I blinked and I was 41. Blink twice more and I'm 50," suddenly the obscene sacrifices required of our musical deities are thrown into sharp relief.

The idea of legacy looms large. There's a strong feeling that the very act of self-destruction is what creates the purest form of cultural history. In one of his most telling exchanges with Klosterman, Murphy openly questions whether, if one is remembered by their successes and defined by one failure, his defining regret might be his decision to walk away. The resounding lack of a definitive answer to that question is, really, the film's central conceit. A year later, given Murphy's apparent failure to totally leave the stage, it's clear that there might not ever be an answer.

There is a sense, throughout the film's 'morning after' strand, that what we're watching isn't quite the beginning of phase 2. Watching Murphy stumble through the day, hungover to the ninth inner circle of Hell and not yet entirely on board with the reality. You know what has to happen at some point and when it finally arrives, it's devastating...

There are some niggles with the film's approach. For all the talk about 'breaking up the band' and references to the decision to quit as a group one, there's next to no focus on the non-Murphy band members. An inevitable result of the decision to present a 'narrative portrait' of Murphy, sure, but it still makes some of the group-focused sentiment feel like little more than lip-service. There's no counterpoint to Murphy and, thus, no criticism that he doesn't inflict upon himself. Perhaps more seriously, while it never feels staged, there's a certain sense of narrative agenda at work; it's difficult to gauge exactly how much of Murphy's day-after ambling about, particularly in the earlier scenes, is affected by the conscious knowledge of being camera-stalked. These are, however, minor beefs with an otherwise flawless work.

Just in case I've not thrown enough hyperbolic plaudits at it, here's another one: Shut Up and Play The Hits is easily one of the best music films out there. Actually it blows the socks off a lot of recent films full stop, being more fun and more emotional than any Sartre-esque dissection of a musical death has any right to be. You wanted a hit? Well, here's a film it's easy to love whether you've heard of LCD Soundsystem or not. A film that, by its close, somehow defines both a generation and a man. And not in terms of failure either. How's that for a legacy? 9/10

"We love being in a band"

“We don't think too much about things...