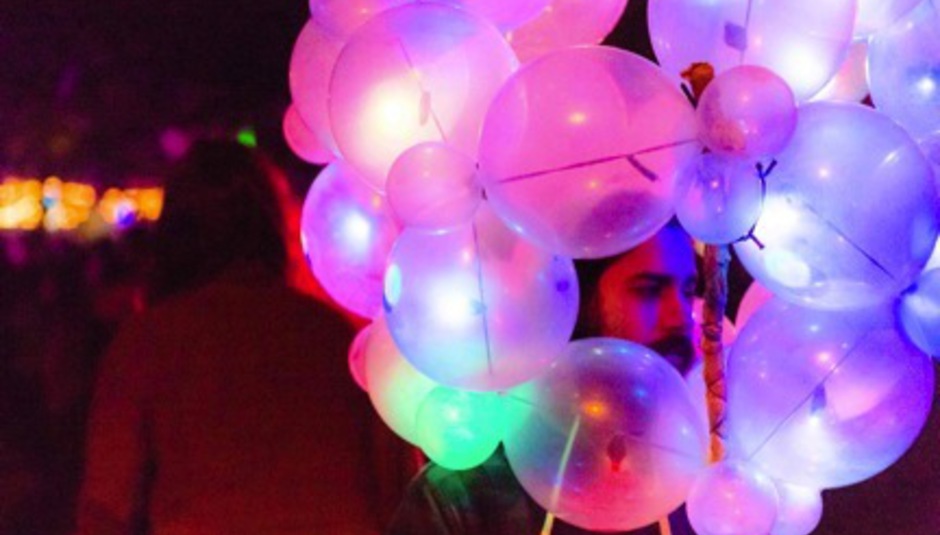 The Treasure Island Music Festival is a very tightly run ship. Across the small windy grounds on a disused naval island in the middle of the San Francisco Bay two stages alternate acts without one second of overlap. The toilets are plentiful and meticulously clean and the shuttle buses are air-conditioned. The line-up, however, appeared a little hastily put together and underwhelming. The biggest draw was probably Atoms For Peace, who helmed “electronic” day, otherwise featuring mostly DJs and a couple of hip-hop acts.

“Rock” Sunday was headlined by Beck, who seems to have been the supporting act at every major summer festival over the last ten years. He hasn’t released a new album since 2008 so to have him closing the festival was met with a bit of a shrug.

Giraffage is more a laptop operator than an artist. He plays a lot of 80s and 90s pop samples over crushingly boring house beats. His press photo features him standing behind what I believe to be a rhododendron. That’s really all there is to say about him. He hasn’t even got any stickers on his MacBook. He dresses all in black, but not with eyeliner and a studded belt like Gary Numan, more like an H&M employee.

Of course I wouldn’t care what he or his computer looked like if he was making interesting dance music, but he was literally playing Kylie Minogue and Cranberries samples over a four to the floor beat. His press release says he is a “sonic dream weaver”. I’ve dreamt of shoelaces that were more interestingly woven. It goes on to say that his “…album NEEDS is sure to appeal to the active listener, as well those who just want to relax”. Well thank Christ for that.

Halfway through his set playlist two girls on roller skates wheeled onto stage and waved around an American Flag, while looking a little bit bored. I puzzled over whether this was supposed to be ironic or not. The same quandary was posited by this man’s hat… Thankfully “daytime disco” LA hipster duo Poolside were a little more creative, and even brought out their own instruments. Their down-tempo synth take on Neil Young’s Harvest Moon pleasantly seeped over the sunny grounds and could have gone on forever, which would have probably been more interesting than the Disclosure set.

As Johnny Firecloud from CraveOnline.com observed…

"Midway through Disclosure's set, I realized that a girl had been singing the past three songs, but there was no girl onstage. One of the UK duo was playing one beat on a drum pad for every ten we'd hear, while his partner plunked along a painfully basic 4/4 bass riff over it. Almost nothing being played onstage was actually being played onstage – and the crowd was entirely unconcerned."

DJ Falcon didn’t even pretend to look interested in what he was doing. He spent his set literally sipping on a beer while occasionally tapping his MacBook, presumably to remove the screensaver.

This lack of performance and spectacle resulted in the crowd aimlessly drifting, and facing the wrong direction like a herd of cats. Some wandered off towards more interesting sights, like this man taping people up and giving them haircuts with a backpack of wires. Still, apathy reigned… Thankfully lively Swedes Little Dragon managed to at least make people all face the stage - real live music! Yukimi Nakano is a wonderful front woman and she offered up some heavily percussive new tracks to look out for in 2014. Thom Yorke was a little upset and too cold to really get into his little dance, but he still exhibited more passion and energy than most who came before him. Atoms For Peace were by far the best act of the day. To see Flea play the apoplectic basslines from Thom’s solo offerings, such as “Harrowdown Hill”, it’s hard to believe he didn’t write them himself. His bass sounded thunderous as he ran around the stage in a red hood like the elusive dwarf at the end of Don’t Look Now, lost in the ecstatic groove that the mesmerizing band somehow create. A reworking of UNKLE’s “Rabbit In Your Headlights” was a highlight. Don’t expect Radiohead to be headlining next year’s festival though, a cranky Thom told the crowd “This feels like playing on a ship in the middle of the ocean, an experience I have no desire to repeat”. Beyond Thom and friends, the day sorely missed the more grandiose and experimental electronic acts that have featured in previous years, such as Flying Lotus, MIA, or DJ Shadow. The bookers instead chose safe DJs and producers playing familiar beats and samples, creating what felt more like a happy hour at the Google campus than a music festival. Sunday started far more promisingly as Palma Violets strolled out looking grizzly, hung-over and a little confrontational. Some wasted friends joined them onstage as they ripped through a sweaty and messy set that must have won them some new fans, including a girl in the front row who enthusiastically shouted to bassist Chilli Jesson ”I want to have your babies!” Chilli took the time to locate the source of the proclamation, and after assessing her simply replied, “You will.” HAIM were probably the biggest surprise of the weekend and the only act that drew requests for an encore. They sound a bit like when Fleetwood Mac got a little post-punk on Tusk, and even covered the Peter Green era “Oh Well”. The three southern Californian sisters harmonized, bounced bluesy riffs off each other, banged freestanding floor toms and generally had a good time. It was pretty contagious. James Blake’s post-dubstep soul can be a truly beautiful thing, but after Real Estate had already slowed things down during their sunset slot, his stuttering dipping groove almost killed the festival dead. I also suspect a lot of witless San Francisco techies were maybe hoping for the American brand of dubstep and wasted their molly on Mr. Blake’s far less danceable British flavour. Before Japandroids' set guitarist and singer Brian King sound-checked in the bracing fog, looking angry and cold. He wore a big coat and clung onto hot towels to try and keep the blood flowing. But then, in an almighty “ah, fuck it”, he stripped down to a T-shirt and, with drummer David Prowse, ripped through a raw and triumphant set with unadulterated gusto, one of the best sets of the weekend and the last gig of their Celebration Rock tour. Watching Sleigh Bells is like of getting punched in the face by a coked-up marine on shore leave, but with less finesse. Alexis Krauss bellows non-sequiturs and punches the air as guitarist Derek Millar hacks at weak Van Halen-lite riffs over the most abrasive drum machine you ever heard. Imagine a less interesting Beth Ditto fronting a Rage Against The Machine cover band, but without the good lyrics. For those that hung around, Beck played a rare and well-received electric set and even tried to stop people running for the buses by indulging in a Billie Jean cover.

Now in its seventh year, Treasure Island Music Festival is suffering a little identity crisis. Saturday’s afternoon dance party drew a sold-out crowd, but sacrificed something compared with previous year’s more eclectic line-ups. As the city of San Francisco draws accusations of losing it’s once off-beat liberal identity to extortionate rents, Google buses and a worrying exodus of real artists, it’s possible that this festival may be going the same way. Reading the interference: What we lea...